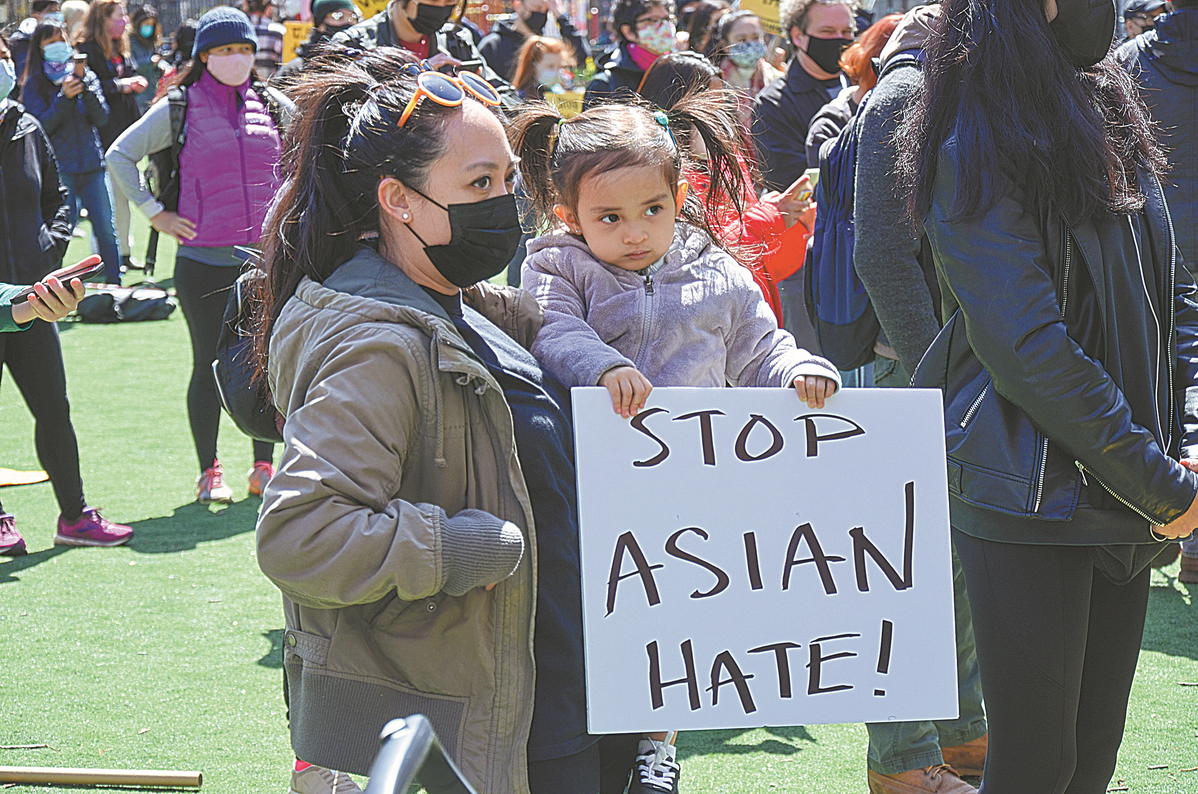 A young participant makes a point during a rally against racism in Lower Manhattan, New York, on April 3, 2021. [Photo: Agencies]

SAN FRANCISCO - Asian Americans continue experiencing racist hate despite their efforts to fight against racism over the past two years, which has been "devastating and traumatizing", said a California-based researcher on Wednesday.

For two years since the outbreak of the COVID-19 pandemic in the United States, about 11,500 anti-Asian hate incidents have been reported across the country to Stop AAPI Hate, a website that aims to fight hate against Asian, American, Pacific and Islander communities by collecting racist hate cases.

"These cases are really traumatizing. I'm arguing this is a period of collective racial trauma," said Russell Jeung, co-founder of Stop AAPI Hate and professor of Asian American Studies at San Francisco State University, at a webinar while discussing the findings of their latest report.

The report, Two Years and Thousands of Voices, provides deeper insight into the racism and discrimination the Asian American community has been facing since the pandemic.

The racism falls under different categories, including civil rights violations, online racism and physical assault. Over the first two years of the Stop AAPI Hate reporting center (March 19, 2020 to March 31, 2022), individuals across the country have reported 11,467 incidents, according to the report.

Among those incidents, two in three involved harassment, such as verbal or written hate speech or inappropriate gestures. More than one in nine incidents included possible civil rights violations, such as discrimination in a business or workplace, said the report.

While one in ten incidents occurred online. The number is significant because "our young people are on screens a lot", said Jeung.

Hate happens everywhere -- in both large cities and small towns, in Asian American enclaves and places where Asian American communities are few and far between, said the report.

According to the report, California is the state that witnessed most of the incidents (4,333), followed by New York (1,840) and Washington (556). "That's just the tip of the iceberg. Our national representative survey last year found that one out of five Asian Americans and Pacific Islanders experienced some form of hate in the past year, so that's 4 million cases of hate," Jeung said at the webinar.

"The trends have been really consistent. Our communities are being racially profiled," he said. "And half of our cases involve people making anti-Chinese remarks. Our youth, the elderly and women are more often targeted."

The report also proposes an approach to addressing anti-AAPI hate: to educate the public about AAPI histories and cultures, and invest in community-based programs to support the healing of victims and survivors and to prevent violence before it starts.