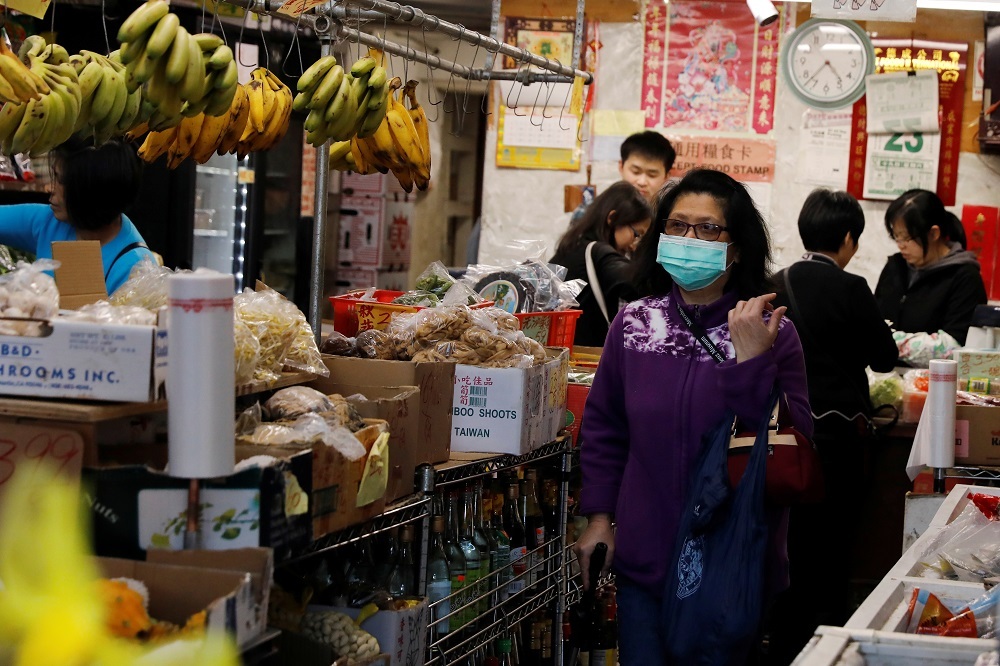 A woman wears a face mask at a market in the Chinatown district of San Francisco, California, on Feb 25, 2020. (Photo: Reuters)

As the coronavirus spread throughout the US, bigotry toward Asian Americans was not far behind, fueled by the news that the first COVID-19 cases were reported in China.

Some initial evidence suggested the virus began in bats. The information quickly got distorted in the US, spurring racist memes on social media that portrayed Chinese people as bat eaters responsible for spreading the virus, and reviving century-old tropes about Asian food being dirty.

"That old-school rhetoric that we eat bats, dogs and rats — that racism is still alive and well," said Clarence Kwan, creator of the anti-racist cooking zine "Chinese Protest Recipes." The speed with which such false stereotypes resurfaced during the pandemic is "a reflection of how little progress we've made," Kwan said.

Wildlife and other "exotic" animals are not part of the modern mainstream Asian diet, either in Asian countries or in the US.

All of the misinformation has had serious consequences.

Stop AAPI Hate, a coalition of Asian American advocacy groups, issued a report in August stating that it had received more than 2,500 reports of hate and discrimination across the country since the group was founded in March, around the time the outbreak began to seriously worsen in the US The group said it received data from 47 states, with 46% of the incidents taking place in California, followed by 14% in New York.

Many businesses that survived have been subject to stigmatization, Kwan said. "Restaurants have been vandalized. As if the pandemic wasn't hard enough, there's this added threat to Asian businesses of this lingering hate."

Conversations about the stigmatization of Asian food reached a crescendo this month when Philli Armitage-Mattin, a contestant on "MasterChef: The Professionals," used the phrase "Dirty Food Refined" and the hashtag #prettydirtyfood in her Instagram bio, which described her as an Asian food specialist.

"In a year where Chinese and East Asian communities have essentially been blamed for the pandemic and chastised as 'dirty,' this type of narrative is completely unacceptable," Kwan wrote on Instagram.

Armitage-Mattin's bio has since been changed and the London-based chef apologized on Instagram, while also insisting that she had never meant to insult anyone.

"The way I mean food to be 'dirty' is indulgent street food; food that comforts you as in, 'going out for a dirty burger,'" she wrote.

But Kwan said especially in the current climate, such phrases can be dangerous.

"It was a very flippant, ignorant, tone-deaf way of talking about Asian food," he said.

Racist rhetoric referring to Asian food as dirty or disease-laden dates back to the 1850s, said Ellen Wu, a history professor at Indiana University. Wu said the false notion that Chinese people eat rat or dog meat is rooted in the xenophobic fears of white workers who used Chinese immigrant workers as a scapegoat for their economic woes.

"To white Americans, these new immigrants were different in a threatening way, and there is fear of the 'other,' of difference," said Wu, who is Asian American.

Benny Yun, owner of the Yang Chow restaurant in Los Angeles' Chinatown district and two other locations in Southern California, said even though his businesses have survived the pandemic, they get prank calls almost daily asking if they have dog or cat on the menu or impersonating a thick Asian accent.

"The worst part is if they realize you speak perfect English, then they just give you a random order and we prepare it and they don't even come to pick it up. Waste of time and money," Yun said.

For years, health inspectors have been accused of docking points from Chinese restaurants for employing traditional cooking and presentation methods, such as hanging roast duck in the front window. The common yet scientifically disproven claim that MSG causes illness made the Chinese food flavor enhancer highly unpopular in the 1970s, forcing many Asian American restaurants to eliminate it from their kitchens.

Kwan said it is important for Asian Americans to protest the way they are being treated; to push back against the latest onslaught of bias and racism by continuing to unabashedly celebrate their food and culture.