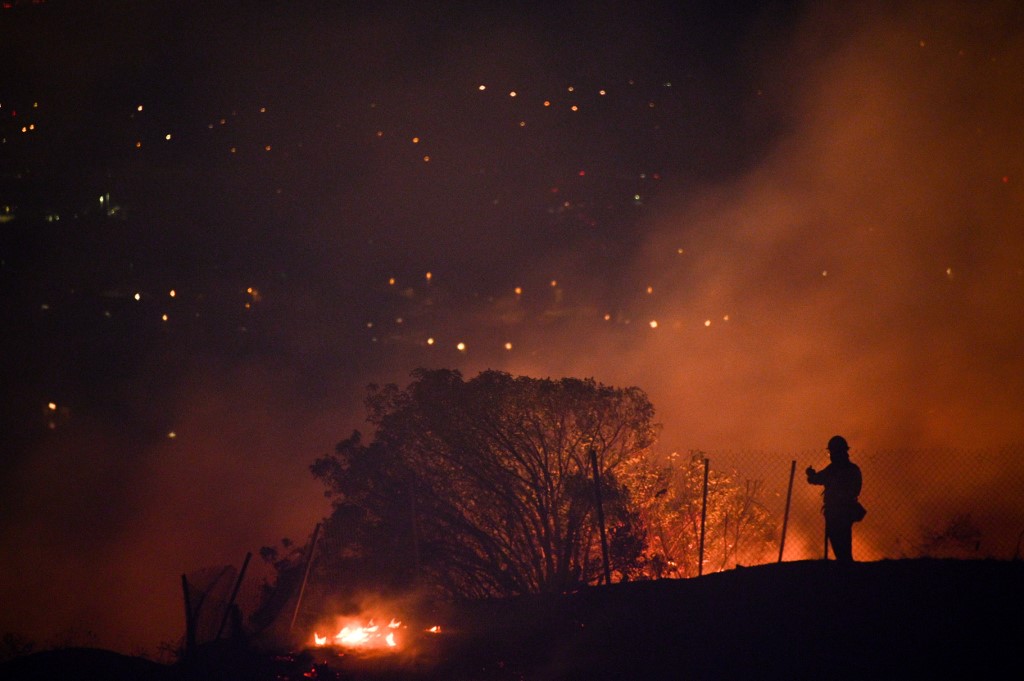 Firefighters position in a residential area and monitor flames climbing a ridge toward homes at the Blue Ridge Fire in Yorba Linda, California, October 26, 2020. (Photo: AFP)

One blaze, dubbed "the Silverado Fire," which started Friday morning in the area of Santiago Canyon Road and Silverado Canyon Road, has exploded to more than 7,200 acres (29.1 square km) in hours, according to the Orange County Fire Authority.

A total of 500 firefighters are battling on the scene amid erratic winds that can reach up to 96 km to 112 km per hour. Officials said that air support has been grounded due to high winds.

According to the Orange County Fire Authority, two firefighters, aged 26 and 31, were critically injured fighting the blaze at noon, and both are in second and third degree burns and currently intubated in the ICU.

At least 60,000 people have been evacuated, said Christina Shea, mayor of Irvine City, in a release.

"We are asking everyone to comply with the evacuation orders for their safety and the safety of our first-responders. The City of Irvine continues to open care and reception facilities for our displaced residents," she noted.

Some roads and school campus in the area were shut down due to the wildfire. Both Irvine Unified and Tustin Unified School District schools will be closed on Tuesday, according to the city's mandatory evacuations.

Video from the scene showed the area was blanketed by heavy smoke and fire raging along roads.

A second blaze, dubbed "the Blue Ridge Fire," started at noon spread to 1,120 acres (4.5 square km) at zero containment as of Monday evening.

A total of 1,651 homes have been affected by the fire, including 1,170 homes under evacuation orders and 481 homes under voluntary evacuation, according to the Orange County Fire Authority.

At least 200 are battling the fire. Officials said that one home had been reportedly damaged by the blaze and they were still waiting on verification of the extent of damage.