WORLD Rail strike would destroy US' economy by costing $2b per day: Fortune

Rail strike would destroy US' economy by costing $2b per day: Fortune 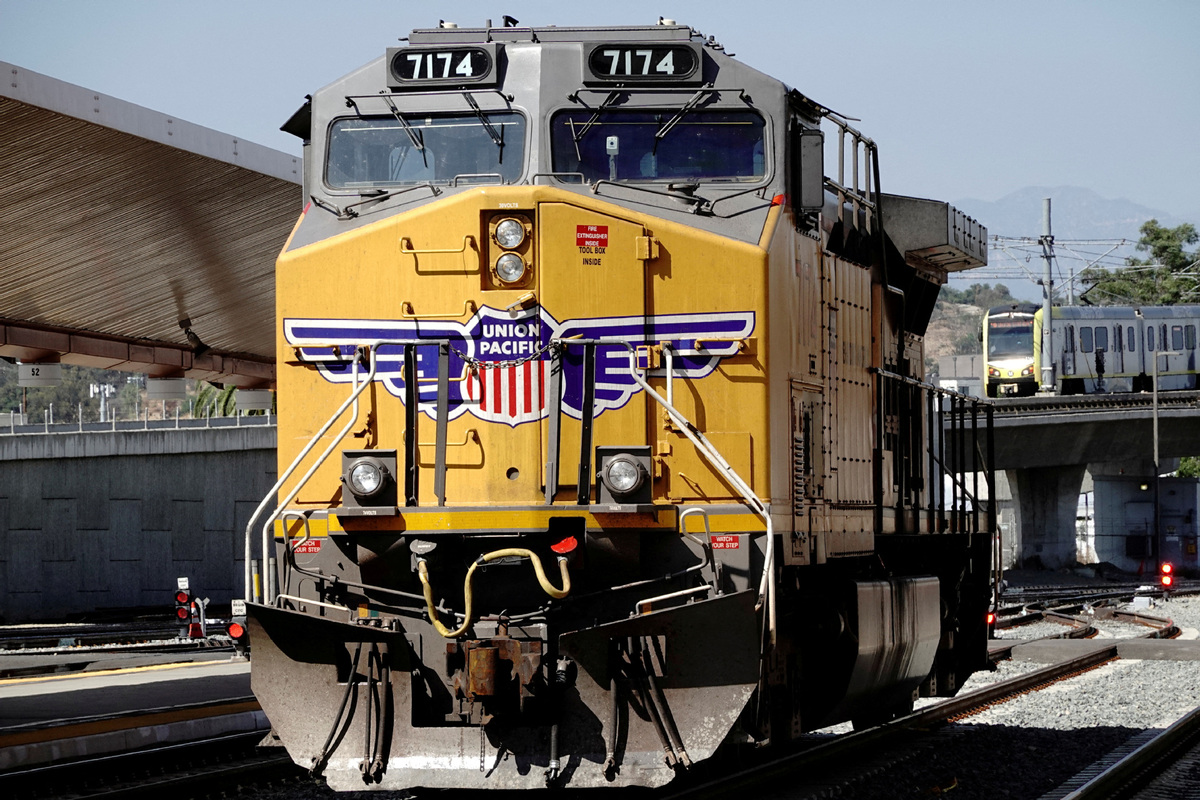 A GE AC4400CW diesel-electric locomotive in Union Pacific livery, is seen ahead of a possible strike if there is no deal with the rail worker unions, as a Metrolink commuter train (right) arrives at Union Station in Los Angeles, California, US, Sept 15, 2022. (Photo: Agencies)

A looming rail strike would impact the US' economy and makers of food, fuel, cars and chemicals, as well as their customers, leaving them all under pressure, according to an article published on Fortune website on Wednesday.

The risk of a rail strike in the US is rising, which could start on Dec 5, according to the author. It would do great harm to the economy, since many businesses only have a few days' worth of raw materials and space for finished goods and commuters would be stuck because many passenger railroads use tracks owned by the freight railroads.

"And major commuter rail services in Chicago, Minneapolis, Maryland and Washington state all warned then that some of their operations would be suspended in the event of a rail strike." The author said.

"Railroads haul about 40 percent of the nation's freight each year." The author added. The loss of the economy would reach $2 billion (14.2 billion yuan) per day, and 700,000 people might lose their jobs while prices of nearly everything would increase, contributing to the economy's recession.

According to the Association of American Railroads trade group, it is estimated that 467,000 additional trucks a day would be needed to handle everything railroads deliver.

About 30 percent of all packaged food in the US is transferred by rail, said Tom Madrecki, vice president of supply chain for the Consumer Brands Association, and the number would be larger for denser, heavier items like cans of soup.

"Big food companies don't like to discuss the threat of a rail strike because of worries about product shortages can lead to panic buying." He said.

Jeff Sloan with the American Chemistry Council trade group said when the strike begins, chemical plants could be close to shutting down. As a result, consumers would also need to pay more for gasoline.

Pork and chicken producers in southern US states would be influenced the hardest because the cost of shipping feed by truck would greatly increase. They can't go without rail services for too long before they'd have to shut down the feed mills and they run into problems," said Max Fisher, the NGFA's chief economist.

The retail industry is also developing contingency plans because they are worried about the shipping of holiday items for Christmas, the author explained. At the same time, the auto industry would suffer more if strikes happen, "because roughly 75 percent of all new vehicles begin their journey from factories to dealerships on the railroad. Trains deliver some 2,000 carloads a day filled with vehicles." Automakers seem unable to keep their plants running during a strike.