WORLD Rain could hamper search for victims of California wildfire

Rain could hamper search for victims of California wildfire 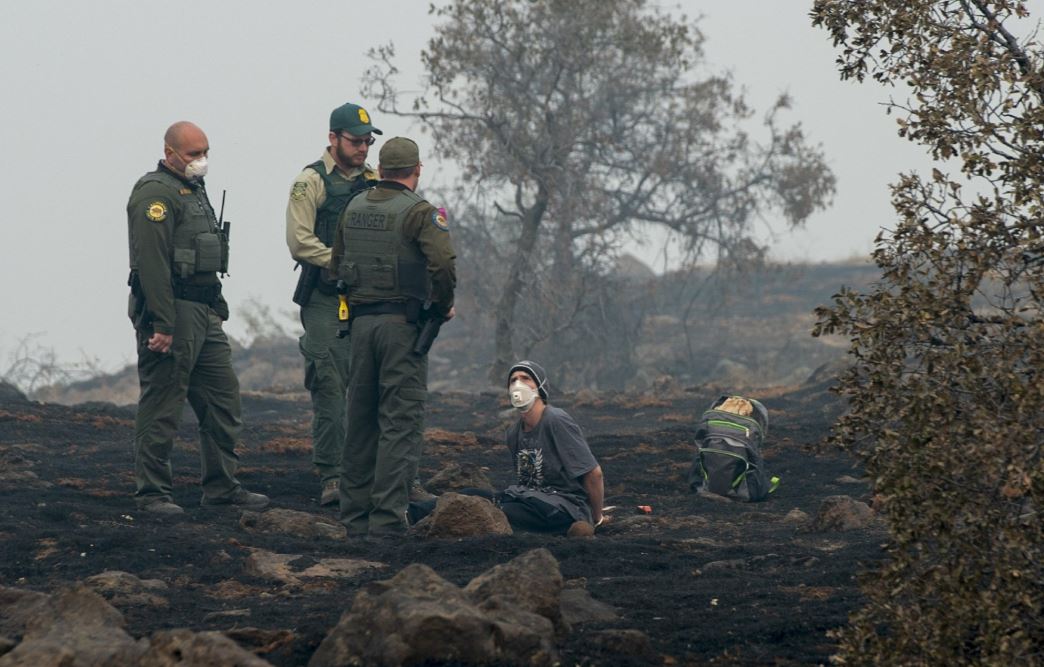 In this Thursday, Nov. 15, 2018, photo, Charlie Miles peers up at state forestry officers and state parks rangers after being arrested for trying to go home on a desolate stretch of Skyway Road between Paradise and a Chico church he was sleeping at in Paradise, Calif. (Photo: Sacramento Bee via AP)

It’s been 12 days since Christina Taft started the frantic search for her mother Victoria, who refused to evacuate their Paradise home as flames neared, and six days since she gave authorities a cheek swab to identify remains that are likely her mother’s.

She still hasn’t received confirmation that her mother is dead, and says she’s been frustrated by what she feels is a lack of communication from Butte County officials.

“They said they found remains, they didn’t say her remains. They won’t confirm it to me the whole time,” Taft said Monday.

With 79 people killed in the nation’s deadliest wildfire in at least a century, there are still nearly 700 names on the list of those unaccounted for. While it’s down from nearly 1,000 the day before, it is inexact, progress has been slow, and the many days of uncertainty are adding to the stress.

More than a dozen people are marked as “unknowns,” without first or last names. In some cases, names are listed twice or more times under different spellings. Others are confirmed dead, and their names simply haven’t been taken off yet.

Survivors and relatives of those caught in the fire in Northern California are using social media to get the word out: In some cases, to post that their loved ones were safe; in others, to plead for help.

“Aunt Dorothy is still missing. There has been confusion going on at the Sheriffs office regarding her whereabouts because she was taken off the list,” a man wrote on Facebook on Monday.

“I have an uncle and two cousins that I have not been able to make contact with,” one woman wrote on Facebook, with their names. “Any info would be appreciated.”

Butte County Sheriff Kory Honea has said he released the rough and incomplete list in hopes that people would contact authorities to say they are OK. He has called it “raw data” compiled from phone calls, emails and other reports.

“We put the list out. It will fluctuate. It will go up. It will go down because this is in a state of flux,” Honea said Monday. “My view on this has been that I would prefer to get the information out and start working to find who is unaccounted for and who is not. I would put progress over perfection.”

Officials have also culled reports from the earliest hours of the disaster, when fire knocked out mobile phone communications and thousands fled, some to safe shelter that was hundreds of miles away.

Honea said his office was working with the Red Cross to account for people entering and leaving shelters. Evacuees are also helping authorities narrow the list, sometimes by chance.

Robert James Miles, who lost his Paradise trailer in the blaze, was staying at a shelter in Chico where people posted names of those they hadn’t heard from. Miles said he alerted a Red Cross worker Saturday that he recognized eight names on the board as friends he knew were OK.

“Two of them were in the shelter,” he said with a chuckle.

Owen and Phyllis Suihkonen understand the chaos. Their family is scattered after they lost their home to the wildfire, as did their two adult children.

Phyllis Suihkonen, 69, says she spotted the names of two friends on the list of unaccounted people, and doesn’t know if they are safe. But her daughter has seen names of friends who are OK and called sheriff’s officials to let them know.

“I’m concerned,” Phyllis said. “But like I said, there’s been other friends’ names on the list that have been accounted for and taken off.”

Meanwhile, those searching for bodies were in a race against the weather, as rain was forecast for Wednesday. The precipitation could help knock out the flames, but it could also hinder the search by washing away fragmentary remains and turning ash into a thick paste.

The fire, which burned at least 236 square miles (611 square kilometers) and destroyed nearly 12,000 homes, was 70 percent contained on Monday.

Alcatraz Island, San Francisco’s cable cars, the Oakland Zoo and other San Francisco Bay Area area attractions were closed Monday because of smoke from the blaze some 140 miles (225 kilometers) away. Several San Francisco museums over the weekend offered free admission to give people something to do indoors.

California Insurance Commissioner Dave Jones said it is “way too early” to estimate the damage done by the wildfire. But for perspective, he said the Northern California fires that gutted 6,800 homes last year resulted in $12.6 billion in insured losses.

“It’s going to be a long and painful process,” he said.