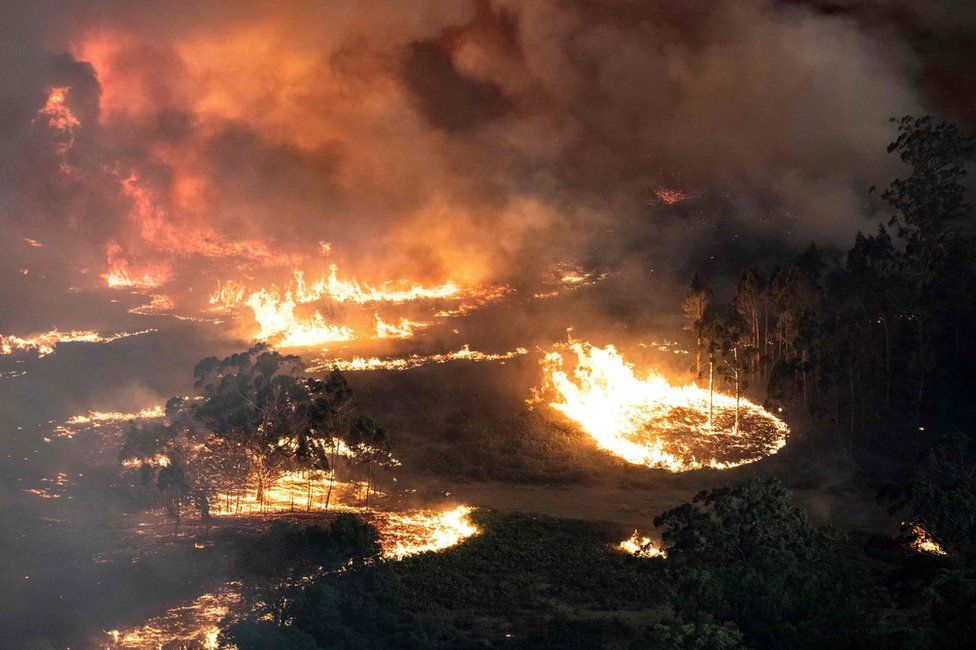 Heavy rain fell on bushfires in eastern Australia Friday for a second straight day, offering further relief from a months-long crisis, but dozens of blazes remained out of control.

This week's wet weather has given exhausted firefighters a major boost in battling unprecedented blazes that have been fuelled by climate change and drought.

The fires have claimed 28 lives, scorched massive tracts of pristine forests and destroyed thousands of homes.

Following months of hot and dry weather that have fuelled the fires, Friday saw the heaviest rainfalls in nearly a decade in some areas close to hotspots.

"Rain has fallen across most fire grounds over the last 24 hours, which is great news," said the Rural Fire Service of New South Wales, the eastern state where many of the worst blazes have raged.

"Our fingers are crossed that this continues over the coming days."

However 30 fires were still out of control in New South Wales on Friday, unchanged from the previous day, the fire service reported.

Dozens of other fires were also still burning in the southern state of Victoria.

And the rain has completely missed Kangaroo Island, the nation's third biggest off the southern coast of the mainland that is famed for its pristine wilderness.

Fires have devastated the national park on the island, wiping out much of its koala population and threatening to completely eradicate bird and other endemic marsupial species.

Still, the prospect of more wet weather across eastern and southern Australia over the coming days offered further hope.

Heavy rain is expected  to continue throughout the weekend in New South Wales, expanding into other fire zones further south in the state and in Victoria.

Roughly a billion animals are estimated to have died in the fires nationwide.

With huge tracts of their habitats destroyed, environmental groups have warned the blazes could drive many species to extinction.

Much attention has focused on Australia's tree-dwelling koalas, with images of the cuddly-looking animals being rescued from wildfires making world headlines.

But on Friday morning, some koalas and other native animals at the Australia Reptile Park on the east coast of New South Wales had to be rescued from floodwaters.

"This is incredible, just last week, we were having daily meetings to discuss the imminent threat of bushfires," park director Tim Faulkner said.

"Today, we’ve had the whole team out there, drenched, acting fast to secure the safety of our animals and defend the park from the onslaught of water.

"We haven't seen flooding like this at the park for over 15 years."

The heavy rain is being seen as a double-edged sword.

The water could also make it harder for firefighting trucks to venture deep into forests on muddy tracks, authorities have warned.

Flash floods are another concern, with scorched mountains unable to hold the water and potentially sending torrents of muddy ash into waterways.

Such torrents have already led to huge numbers of fish dying in rivers that were poisoned by the muddy ash, local media have reported.

The fires have burnt roughly 10 million hectares (25 million acres) of land -- an area larger than South Korea or Portugal.

Their massive destruction is an example of the catastrophic impacts of climate change that the world will increasingly face, scientists have warned.

The past decade was the hottest on record globally, the United Nations reported this week.

Australia experienced its driest and hottest year on record in 2019, with its highest average maximum temperature of 41.9 degrees Celsius (107.4 degrees Fahrenheit) recorded in mid-December.

Famed British naturalist and broadcaster David Attenborough warned this week the world was facing its "moment of crisis" on climate change and could not delay action any longer.

"We have to realise that this is not playing games, this is not just having nice little debates and arguments, then coming away with a compromise," he said in an interview with the BBC.