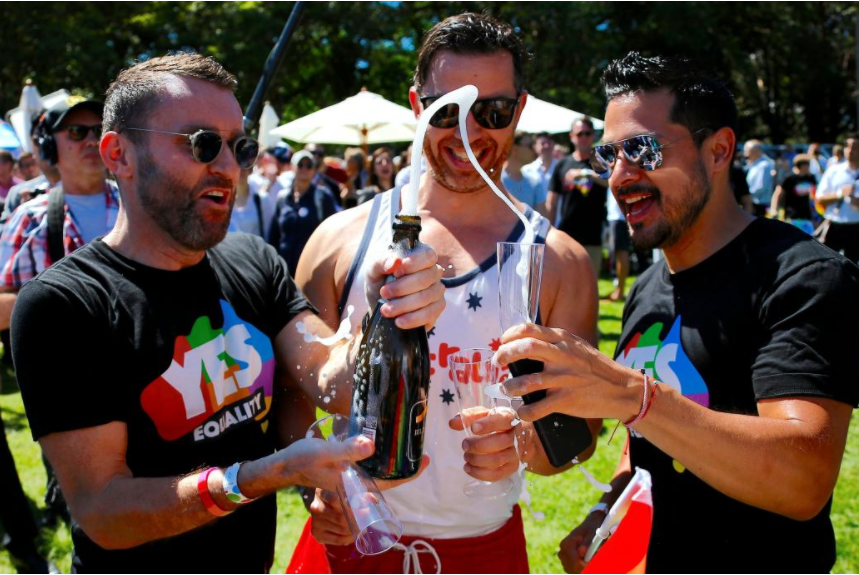 Supporters of the 'Yes' vote for marriage equality celebrate after it was announced the majority of Australians support same-sex marriage in a national survey, paving the way for legislation to make the country the 26th nation to formalise the unions by the end of the year, at a rally in central Sydney, Australia, November 15, 2017. REUTERS/David Gray

Australians have voted overwhelmingly for same-sex marriage, paving the way for legislation by the end of 2017 and sparking rainbow celebrations on Wednesday, with people wearing wedding dresses and sequined suits and declaring “our love is real”.

Australia will become the 26th nation to formalize the unions if the legislation is passed by parliament, which is expected despite some vocal opposition within the government’s conservative right wing.

Thousands of people in a Sydney park broke into a loud cheer, hugged and cried as Australia’s chief statistician revealed live over a big screen that 61.6 percent of voters surveyed favored marriage equality, with 38.4 percent against.

Australian Olympic swimmer Ian Thorpe, who came out as gay three years ago, said the result was a huge relief.

“It means that the way you feel for another person, whoever that may be, is equal,” Thorpe told reporters at the Sydney celebrations.

The voluntary poll is non-binding but Prime Minister Malcolm Turnbull immediately said he would fulfill a pledge to raise a bill in parliament with the aim of passing laws by Christmas.

Turnbull played down concern of a split in his coalition government over the policy as the conservative faction presses for amendments to protect religious freedoms that discriminate against same-sex couples.

“It is unequivocal, it is overwhelming. They have spoken in their millions and they have voted overwhelmingly yes for marriage equality,” Turnbull told reporters in Canberra after the survey results were announced.

“They voted yes for fairness, yes for commitment, yes for love.”

A marriage equality bill was introduced into parliament later on Wednesday.

The result marks a watershed moment for gay rights in Australia, where it was illegal in some states to engage in homosexual activity until 1997.

Mark Barry, 59, wiped away tears as he took in the result with his partner of 35 years, Gerrard Boller.

“I know a celebrant who is going to be very happy about this,” Barry told Reuters.

Irish-born Qantas Airways Chief Executive Alan Joyce, one of the few openly gay business leaders in Australia, told the Sydney crowd, many of whom sheltered from the sun under rainbow umbrellas, that the result was “an amazing outcome” and urged Turnbull to move quickly on legislation.

Turnbull has been under pressure amid a citizenship crisis that has cost him his deputy and the government’s majority in parliament and political analysts said the resounding “yes” vote presented him with his first opportunity in months to exert decisive control.

Nick Economou, a political scientist at Monash University, said Turnbull “should feel emboldened by the result and this is the sort of thing he has been looking for to show some assertive leadership”.

The ‘no’ campaign had sought to leverage powerful religious organizations in a survey campaign that was criticized by some in the ‘yes’ camp as divisive and aggressive.

Catholic Archbishop of Sydney Anthony Fisher said he was “deeply disappointed that the likely result will be legislation to further deconstruct marriage and family in Australia”.

On the strength of the “yes” vote, conservatives dropped a plan for a competing bill that would have allowed private businesses to refuse services like wedding cakes for same-sex weddings by objecting on religious grounds.