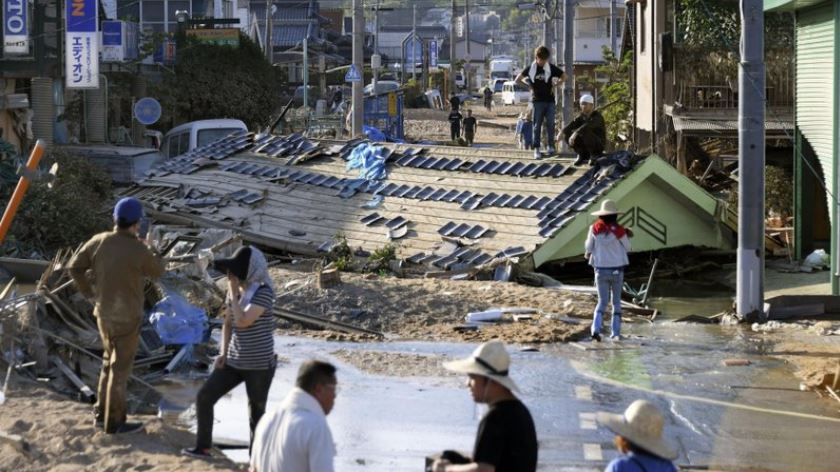 In this Monday, July 9, 2018, photo, a roof of a house is left in the middle of a road in Kurashiki, Okayama prefecture, western Japan.(Photo: AP)

Tokyo (People's Daily) - The toll in record rains that have devastated parts of Japan has risen to 179, the government's top spokesman said Wednesday– making this the country's worst weather-related disaster since the 1982 Nagasaki flood.

Japanese Prime Minister Shinzo Abe and the several of the country's high ranking officials gathered in the House of Representatives, where they were reportedly drinking and laughing. This instance has been criticized by many of Japan’s citizens and many netizens have also expressed their indignation.

According to NHK, Japan's national public broadcasting organization, the rainstorms have also displaced thousands from their homes and forced them into emergency shelters.

Search-and-rescue operations with about 75,000 people and 79 helicopters are continuing after the disaster.

Many of the country's factories are resuming production, however, major brands like Panasonic are still closed. Japanese Minister of Agriculture, Forestry and Fisheries Saito Ken stated during a press conference on Tuesday that the disaster has caused some 7.2 billion yen in damages to the country's economy.

Compared to other natural disasters in the past, the Japanese government is being blamed for its relatively poor response for this latest disaster. Despite a series of warnings on July 5, the Japanese government did not set up a special office to deal with emergencies. Japanese Chief Cabinet Secretary Suga Yoshihide announced on July 9 that Japanese Prime Minister Shinzo Abe would be cancelling his visit to Europe and the Middle East, which was planned to start July 11.

Abe attended the meeting of the West Japan Rainstorm Emergency Response Countermeasure Headquarters on July 10, where he stated that 2 billion yen from the country’s 2018 annual budget will be given to relief efforts.

Additionally, the first meeting of the victims’ life support group, composed of officials from various provincial and ministerial departments, was held at the prime minister’s residence on July 10.

The support group will mainly focus on the logistics for providing aid, dispatching staff to the damaged areas, and ensuring temporary resettlement housing.

On July 5, officials in charge of the Japan Meteorological Agency held an emergency press conference to announce that record rainfall would batter the country's western and eastern regions for the next eight days.

The local governments for Hyogo, Osaka, and Kyoto then issued emergency evacuation instructions to about 200,000 people.

At the same time, the country’s opposition party strongly urged Congress to temporarily suspend the review of other bills to focus on problems stemming from the rainstorms. However, the Democratic Party of Japan still insisted on reviewing casino-related bills during a recent Senate meeting.