MEXICO CITY, Aug. 18 (Xinhua) -- Rampant arms trafficking across the Mexican border in the past decade, not least with weapons from the United States, is fueling Mexico's spiraling drug violence, experts and activists told Xinhua. 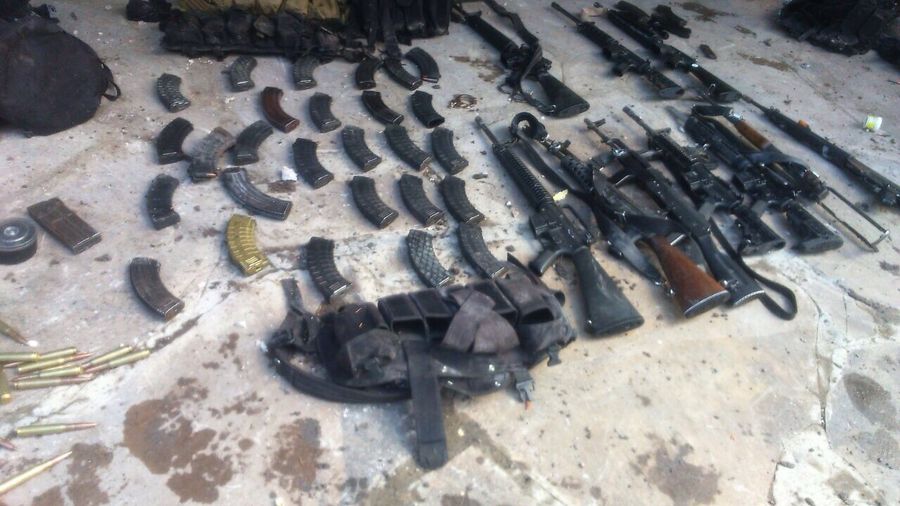 Weapons captured in the clash are laid on the ground in Tanhuato municipality, Michoacan state, Mexico, May 22, 2015. (Xinhua/El Sol de Morelia-OEM)

Each year on average, more than 200,000 weapons enter Mexican territory, due to the largely unregulated sale of arms in the United States. That means more than 560 weapons a day are brought into the country, and most of them cannot be recovered, according to Mexico's Ministry of National Defense.

About 70 percent of homicides or femicides in Mexico are committed with firearms, according to the Mexican Foreign Ministry.

"The crisis of Mexican violence and its relationship with weapons is not new, but has been on the rise currently ... in fact it is possible to trace back to the beginning of the 2000s, when the United States deregulated carrying assault weapons," said Rodrigo Pena Gonzalez, a Mexican criminologist.

"That (measure) leads to the first waves of violence in Mexico. Instead of stopping, it exacerbates the situation," said Pena Gonzalez.

Lax gun laws in the United States, which allow practically anyone to purchase military-grade assault weapons, coupled with Mexico's porous border, have undermined bilateral efforts to fight crime, said the academic from the prestigious Colegio de Mexico (The College of Mexico).

To tackle the problem, he said, Mexico's government in early August took the "unprecedented" step of suing 11 U.S. arms manufacturers and distributors for their role in arming criminal organizations.

However, much more needs to be done, he added.

When people and vehicles heading into Mexico undergo strict inspection at borders known as arms-trafficking points -- such as San Diego-Tijuana, McAllen-Reynosa and Brownsville-Matamoros -- the truth is that neither government "has the capability to monitor all flows, especially ... arms trafficking from north to south," said Pena Gonzalez.

Human rights activist Raymundo Ramos Vazquez said he believes that a combination of stricter gun laws and better border control would be a better solution.

"As long as this flow is not stopped and the traffickers in small arms or the large companies that sell them are not put behind bars, the violence will continue," said Ramos, who is president of the Human Rights Committee of the violence-torn Mexican border city of Nuevo Laredo.

A report, based on official data of seizures from 2016 to 2017 and presented by the United Nations Office for Drugs and Crime in 2020, showed that firearms are smuggled into Mexico in batches that are smaller compared to smuggled arms shipments in other parts of the world.

Assault rifles, machine guns and bullets are brought into Mexico in trailers or private vehicles modified to hide the weapons in secret compartments, according to Mexican officials, who manage to foil some smugglers.

Ramos questioned Washington's stance towards Mexico, asking why the United States demands Mexico fight organized crime but "never touches on the issue of the weapons, the weapons that come from U.S. manufacturers."

The manufacture, sale and use of guns in the United States is a huge industrial chain, forming huge interest groups, such as the National Rifle Association, which makes large political contributions to presidential and congressional elections.

Many drawbacks of U.S. party politics, vote politics and money politics are intertwined, which makes it difficult for legislative and executive agencies to make a difference on gun control but let the situation continue to deteriorate.