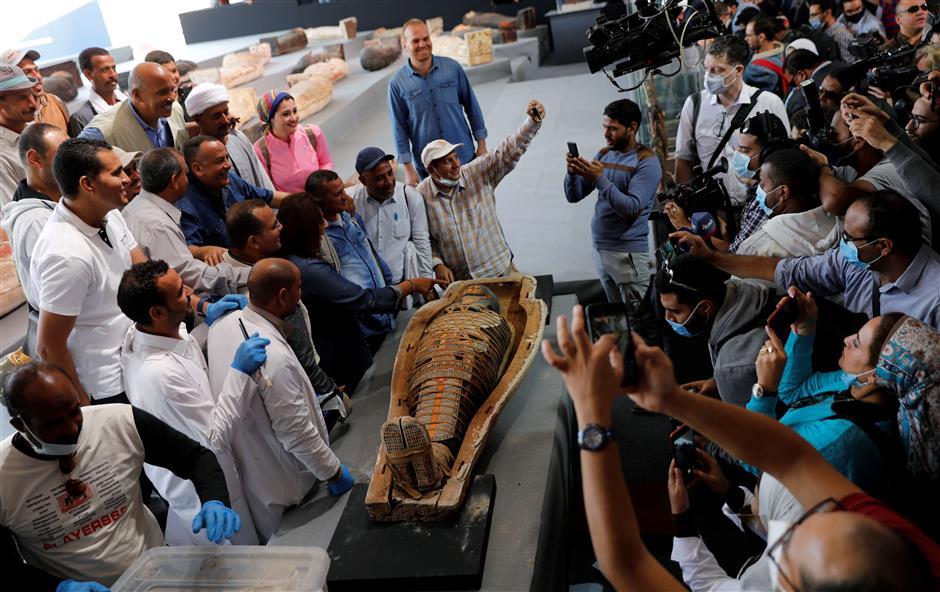 A sarcophagus that is around 2500 years old, from the newly discovered burial site near Egypt's Saqqara necropolis, is seen during a presentation in Giza, Egypt on Saturday. Photo: AP

Egyptian antiquities officials on Saturday announced the discovery of at least 100 ancient coffins, some with mummies inside, and around 40 gilded statues in a vast Pharaonic necropolis south of Cairo.

Colorful, sealed sarcophagi and statues that were buried more than 2,500 years ago were displayed in a makeshift exhibit at the feet of the famed Step Pyramid of Djoser at Saqqara.

Archeologists opened a coffin with a well-preserved mummy wrapped in cloth inside.

They also carried out X-rays to visualize the structures of the ancient mummies.

The studies showed how the bodies had been preserved.

Tourism and Antiquities Minister Khaled el-Anany said the discovered items date back to the Ptolemaic dynasty that ruled Egypt for some 300 years — from around 320 BC to about 30 BC, and the Late Period (664-332 BC). The discovery is the latest in a series of archaeological finds in Egypt.