Rare rhinos among more than 200 animals killed by India floods 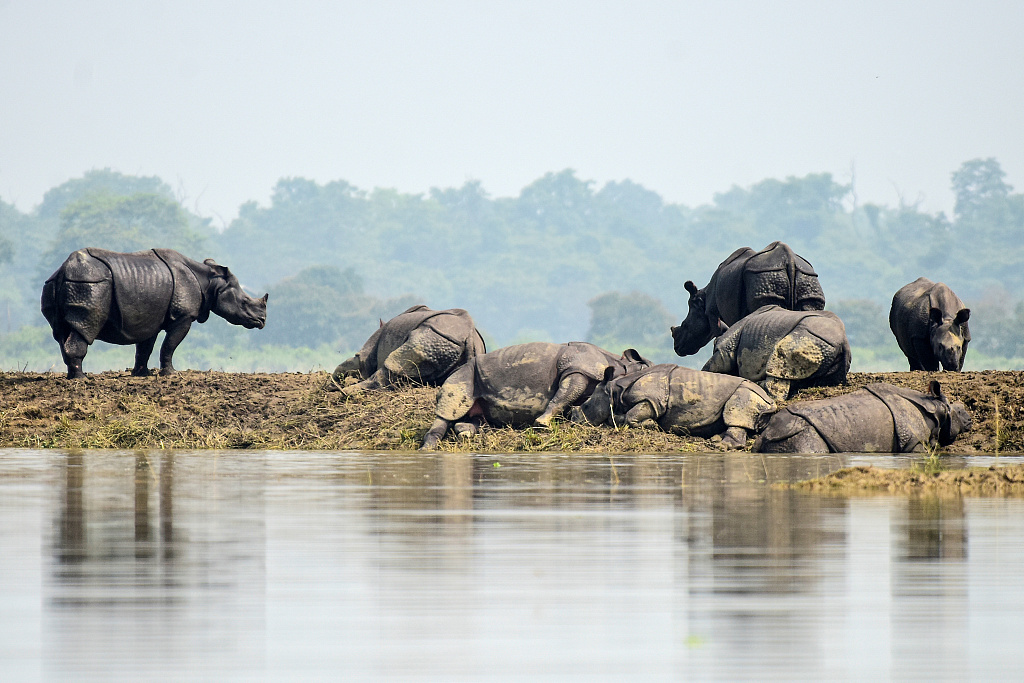 One-horned rhinos rest on a highland in the flood affected area of Kaziranga National Park in Nagaon district, in the northeastern state of Assam, India, July 18, 2019. (Photo: VCG)

Forty percent of Kaziranga National Park in Assam has been left under water following 10 days of torrential rains that have also killed more than 71 people in the northeastern state.

The UNESCO-listed heritage site is home to the world's biggest population of one-horned rhinos and draws thousands of tourists from around the world each year.

But it has been stricken by the floods, and as the waters start to recede workers fear the animal toll will rise.

He said another 16 hog deers and a sambar had been hit by speeding cars while trying to cross a highway that passes through Kaziranga.

Sivkumar, who has proposed giving AK-47 rifles to park rangers to prevent poaching during the floods, said some animals were starting to return.

"The flood situation is improving gradually," he said.

Rangers and volunteers rescued 69 stranded animals -- including three rhinos and an elephant -- but some had since died at a rehabilitation centre, park officials said.

Sivkumar said a Supreme Court ban on mining in the nearby Karbi Anglong hills, ordered in April, had helped save lives as the area became a sanctuary for animals which fled the rising water.

"The animals used to avoid the highlands because of the mines. They were afraid of coming into contact with humans," he said.

Rangers patrolling the mines had seen water buffaloes, rhinos, elephants and even tigers in the quarries.

The park has set up a Special Rhino Protection Force to guard the more than 2,400 rhinos in the park against poachers.

One notorious poacher was detained this month and Sivakumar said earlier that a select group in the force would be given automatic rifles for patrols during the floods.

At their worst, the flooding covered 90 percent of the park.

The torrents have inundated more than 4,000 villages across Assam, forcing hundreds of thousands into emergency camps. More than 650 people have been killed across India, Nepal, Bangladesh and Pakistan.