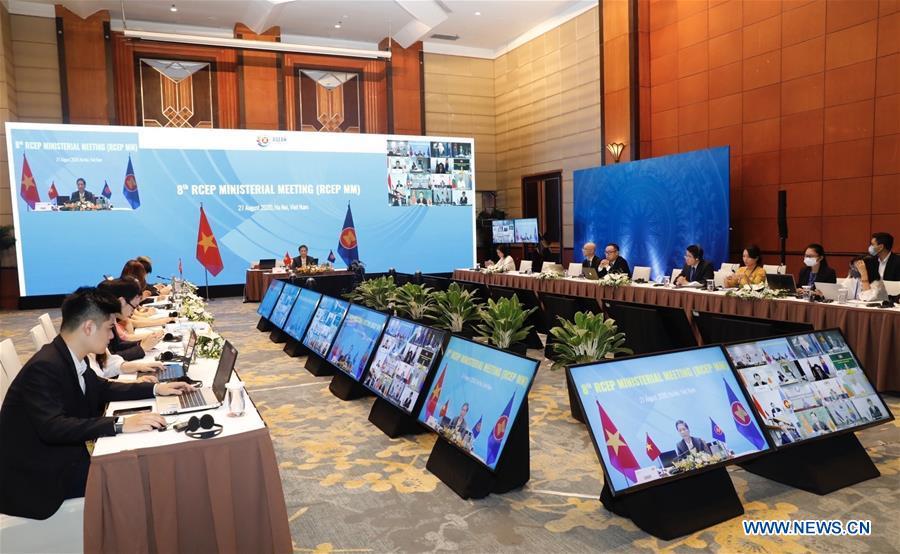 HANOI - Member countries of the Regional Comprehensive Economic Partnership (RCEP) are expected to hold a meeting in October on preparation work for the deal's signing within this year, a Vietnamese official said Sunday.

Speaking at a press conference of the just concluded 52nd Association of Southeast Asian Nations (ASEAN) Economic Ministers' (AEM) Meeting and related meetings, Vietnamese Minister of Industry and Trade Tran Tuan Anh said signing the RCEP by the end of this year was prioritized by the AEM.

The meeting scheduled for October will continue to evaluate and review the preparing works for the RCEP's signing, before reporting to the 37th ASEAN Summit in November, and is believed to bring updated and supplemented information, Anh said.

He said when attending the eighth RCEP Ministerial Meeting via video conference Thursday, economic ministers from the RCEP countries had careful discussions and exchanges on orientations to solve the remaining issues in finalizing the RCEP negotiation and preparing for its signing within this year.

"It can be said that most remaining issues related to work contents and conclusion of the RCEP negotiation have achieved very positive results," Anh said.

The ministers also delivered specific directions regarding legal review issues, the continuation of internal process implementation, and promoting the completion of preparation work for the RCEP's signing by the end of this year while facilitating India to continue to join the signing process, he said.

He said the RCEP has been always among the priorities in Vietnam's integration strategy and is identified as one of the 13 priority goals in Vietnam's ASEAN Chairmanship 2020.

At the press conference, Anh also spoke highly of the achievements reached by the ASEAN and China regarding their relations, noting that the two sides have long term plans and programs to continue to promote trade exchanges and open markets.

He also said the ASEAN and China are committed to enhancing cooperation in important fields, especially in imperative fields in the context of COVID-19 and those with regard to vaccine production and distribution.