WORLD RCEP poised to be signed at weekend

RCEP poised to be signed at weekend 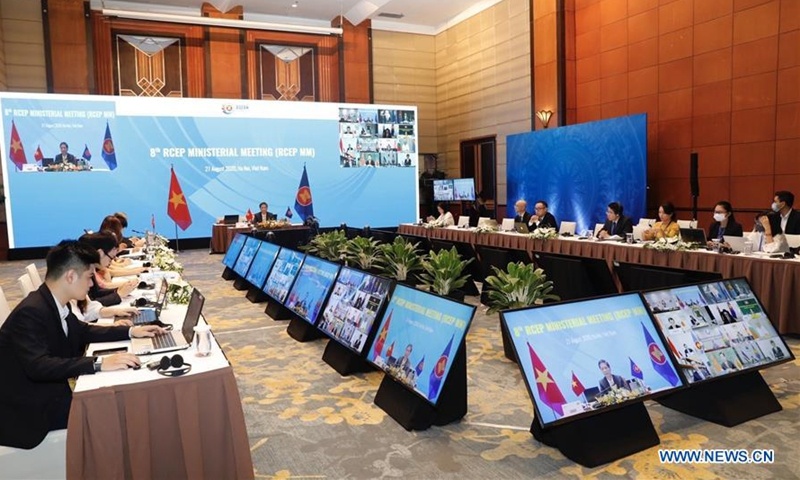 "All texts and legal review work of the RCEP are complete," Assistant Minister of Commerce Li Chenggang told a press conference on Wednesday, noting the agreement is expected to be signed at the 4th RCEP leaders' meeting online on Sunday.

Once signed, the RCEP will be one of the most vital achievements in the integration of Asia-Pacific economies over the past 20 years, helping the region to realize high-level market opening-up and forming a relatively unified economic and trade system, Li said.

Initiated by the Association of Southeast Asian Nations (ASEAN) in 2012, the RCEP is the largest free trade agreement worldwide, with 15 members covering 47.4 percent of the world's population, about one-third of global GDP, 29.1 percent of world trade and 32.5 percent of global investment.

The signing of the agreement will give a "significant" boost to regional economic growth, as the pact is expected to be a driver of the recovery of member countries' economies as well as Asia-Pacific cooperation in the post-COVID-19 era, Su Ge, chairman of the Beijing-based China National Committee for Pacific Economic Cooperation, told the Global Times on Wednesday.

The removal of tariff and non-tariff barriers alone under the RCEP would increase the Asia-Pacific region's GDP by 2.1 percent and world GDP by 1.4 percent, according to estimates.

The pact is estimated to drive up China's GDP growth by about 0.55 percent and Japan 0.1 percent, Zhang Yansheng, chief research fellow at the China Center for International Economic Exchanges, told the Global Times.

A South Korean research institute, the Korea Institute for International Economic Policy, predicted the RCEP would boost South Korea's GDP by 0.41-0.62 percentage points and provide benefits to local consumers of $4.2 billion to $6.8 billion after tariffs are cut.

In particular, the RCEP will be the first trade agreement between China and Japan, bringing an opportunity for the latter to explore the market of the world's second-largest economy, experts noted.

The pact allows Japan to cancel tariffs on 56 percent of the farm products imported from China, 49 percent of those from South Korea and 61 percent of items from ASEAN members, Australia and New Zealand, Kyodo News reported.

"In addition, the signing of the RCEP will push forward the China-Japan-South Korea FTA talks as well," Shen Minghui, secretary-general of the Center for APEC and East Asian Cooperation with the Chinese Academy of Social Sciences, told the Global Times on Wednesday.

The 15 countries agreed on RCEP terms last year, but the process was delayed as India pulled out of the talks last year due to its concerns about harm to local producers if import tariffs were eliminated, experts said.

According to Su, an obstacle for signing the agreement is the unclear attitude of India — but China and ASEAN have reached an important consensus of economic cooperation. "We hope the RCEP can be reached under new circumstances in order to benefit every regional member," Su said.

However, other countries in East Asia are willing to remain open to India if it returns to the RCEP family, said Shen.

"By joining the mega FTA, India can enter the huge East Asian market, especially the lucrative Chinese market, and participate in the production network in East Asia. That is also an advantage for the South Asian country to realize its dream of a larger manufacturing industry," he noted.

As COVID-19 keeps wreaking havoc while unilateralism and protectionism increase uncertainty over global trade, the solidarity and resilience shown by countries in East Asia have never been so important. Signing of the trade pact will improve the region's business climate, stabilize regional supply chains, and help its economic recovery in the post-COVID-19 era, Shen said. Across the globe, the region has also taken a lead in containing the virus and speeding up its economic recovery.

In the long run, the possible US return to the Trans-Pacific Partnership (TPP) would make East Asia's trade picture more complicated, experts noted.

"It is likely for the incoming Biden administration to rejoin TPP because he wants to bring the US back to multilateralism in order to keep the country's position and influence in setting the rules of global trade," Xu Liping, director of the Center for Southeast Asian Studies at the Chinese Academy of Social Sciences in Beijing, told the Global Times.

"That may result in competition between the TPP and RCEP in some areas, but cooperation and fusion of the two FTZs is also possible," Xu added.