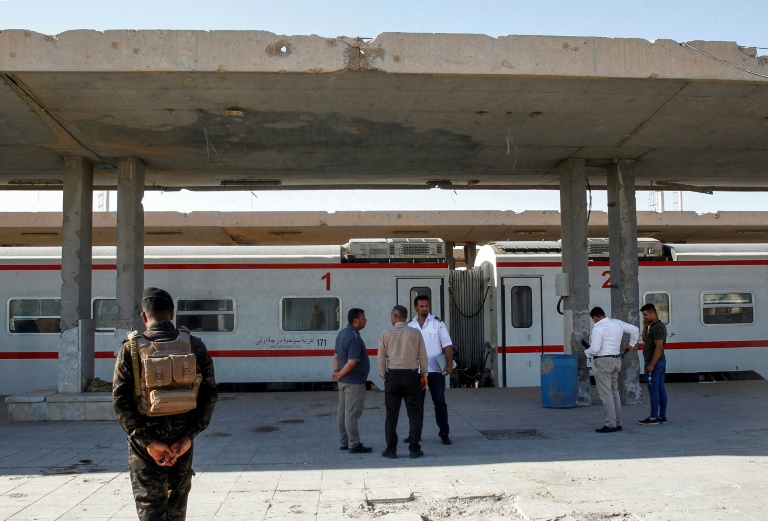 A train along the platform in Fallujah in Anbar province, part of the newly revived railway between the city and the capital Baghdad about 70 kilometres away. (Photo: AFP)

The newly revived railway between Baghdad and Fallujah snakes across the western Iraqi desert, through a landscape of burned-out tanks, abandoned cars and collapsed buildings.

For the last month, Captain Imed Hassun has taken pride in once again driving the route between the capital and the former Islamic State group stronghold.

"I didn't think that a train would come back here again," says Hassun, who has been a driver for 30 years but had until recently been redeployed elsewhere.

While government forces expelled IS from Fallujah in 2016, the line still bears the scars of the group's two-year occupation of the city and its environs, including mines it planted along the tracks.

Before the jihadists' rise, Hassun and his co-driver steered the Baghdad-Fallujah route during some of the most turbulent times in Iraq's history.

They had even kept trains running during much of the combat between American forces and Sunni militia in the mid 2000s, and the sectarian clashes that preceded the rise of IS.

But while happy to be back on this line, Hassun -- clad in the marine blue and white uniform of Iraq's railways -- proceeds with caution.

So far, he has successfully pushed his new Chinese-built diesel train to 100 kilometres (60 miles) per hour.

But he dare not go faster, as the rails have only just been brought back into basic working service by a team of dedicated employees.

"When we started the work, people mocked us," says Yussef Thabet, the chief railroad engineer in Fallujah.

"But as soon as the first convoy entered the station, people were forced to believe it -- and now they demand more trains," he adds.

There remains much work to do.

Fallujah's old station is still in ruins, replaced for now by a pre-fabricated structure and plastic chairs.

But for passengers, the revitalised line is a vital link to the capital and the only alternative to polluted and gridlocked roads.

Road travel is frequently made even less appealing by security personnel forcing traffic into unexplained detours.

For years, medical student Ali Ahmad took the minibus every week to a university campus in Baghdad.

Now in his final year, he finds taking the train aids his study.

"I revise in an air-conditioned carriage for an hour and a half, without being plagued by cigarette smoke," he says.

In the cafe car, a screen displays the outside temperature at 43 degrees Celsius (109 degrees Fahrenheit), and the train's speed at 91 kilometres per hour.

On the journey back from Baghdad, 28-year-old Sinan Majid has his hands full of boxes.

He has bought clothes to stock his shop in Fallujah.

"With the train, we know the time of travel. And there is no delay," Majid tells AFP, sitting at a table with friends.

For Lamia Ahmed too, the train is a godsend. The 39-year-old primary school teacher can rely on it to get her to Baghdad for administrative tasks, without worrying that offices will close before she arrives.

And above all, enthuses Omar Khalil, a 38-year-old hairdresser who has come to Baghdad to buy parts for his car, a ticket costs 2,000 dinars (less than two dollars, or 1.5 euros).

The train leaves Fallujah every day at 6:45 am to travel the 65 kilometres to the capital, before returning at 3:00 pm, a time judged to best suit civil servants and students.

Iraq has 2,000 kilometres of railways and its network was connected to Istanbul in 1940.

The country plans a major revival of its network.

For now, the line between Baghdad and Akashat on the Syrian border only works as far as Fallujah, says Taleb Jawad Kazem, deputy director general of Iraq's railways.

But the lines to Basra at the southern tip of the country, and to the Shiite holy city of Karbala in central Iraq, never stopped operating.

And work is under way to reopen the links to Baiji, Tikrit and Samarra to the north of Baghdad, adds Kazem.

But there is a long way to go before the network can host the 72 daily train journeys that were made in the heyday of Iraq's railways, before the UN slapped sanctions on the country in the 1990s.

Enormous work will be required to ensure trains once again reach Syria -- or even Mosul, Iraq's second city and another former IS stronghold.

"The rails, stations, equipment, bridges and tunnels have sustained damage of more than 90 percent" in areas where the jihadists operated, Kazem tells AFP.

And on the rehabilitated routes, another danger lurks -- demoralised children from slums built close to the tracks.

As each train passes, small groups of boys throw stones, chipping the windows.