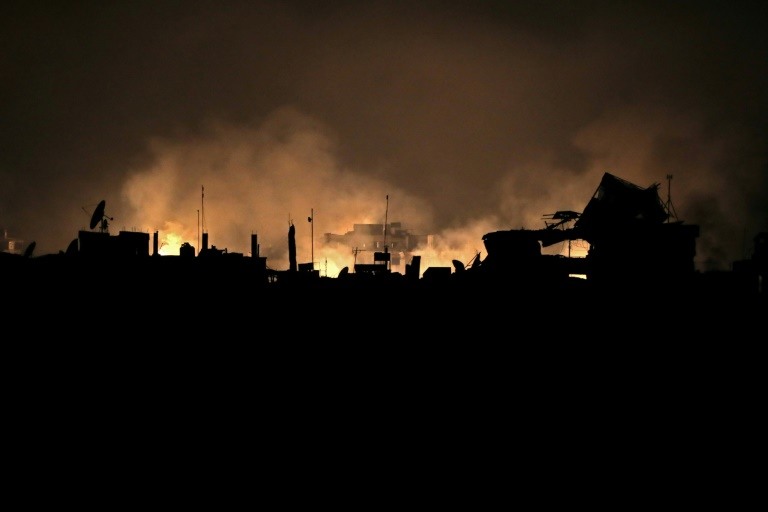 Flames light up the sky over the largest Eastern Ghouta town of Douma before dawn on March 23, 2018 as the Syrian army and its allies seek to seal their reconquest of the rebel enclave outside Damascus. (Photo: AFP)

Eastern Ghouta's six-year rebel rule was in its dying moments Friday as fighters evacuated one of the Syrian enclave's three remaining pockets and a deal was reached for another.

A blistering regime assault since February 18 on the last opposition bastion outside Damascus has splintered remaining rebel territory into three shrinking pockets, each held by different factions.

Damascus and its ally Moscow have implemented a "leave or die" strategy with deadly air strikes on the enclave.

For the second consecutive day on Friday, rebels quit one pocket while state media said a deal had been reached for the evacuation of a second one.

The deal provides for "the transfer of nearly 7,000 people, fighters and their families" from an area in the south of the enclave held by the Islamist group Faylaq al-Rahman, state television said. 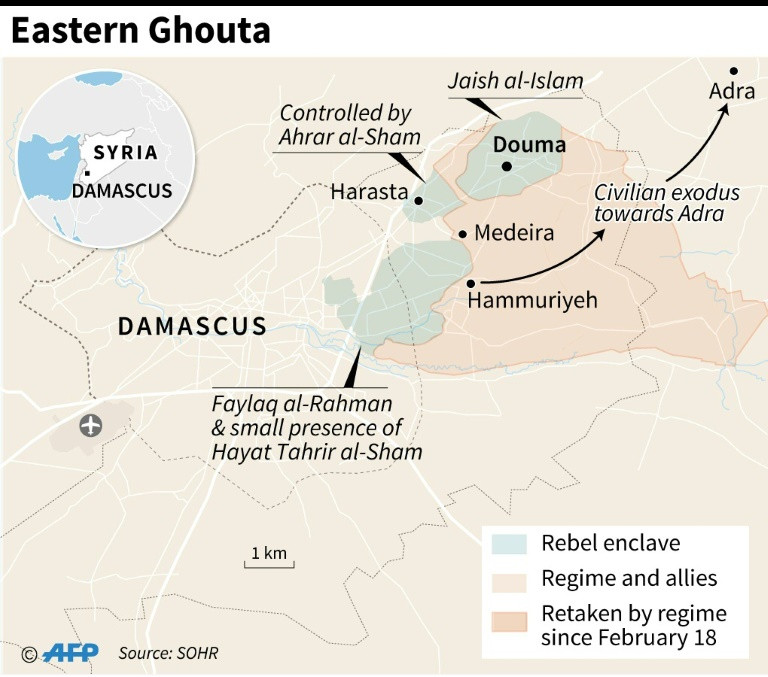 It will empty a southern area of Eastern Ghouta that includes the towns of Zamalka, Arbin and Ain Tarma, it said, with evacuations set to begin at 9:00 am (0700 GMT) on Saturday.

A deal, struck with another group for the smaller pocket of Harasta, began on Thursday and talks are under way for the third and final pocket, which includes Eastern Ghouta's main town of Douma.

Faylaq al-Rahman group, which agreed to a ceasefire late Thursday following another wave of deadly air strikes, confirmed the agreement.

But Russia denied it was carrying out any such strikes.

"Russian aviation is not striking residential areas of Eastern Ghouta and especially it is not using incendiary weapons," the Russian defence ministry said.

The first batch of fighters to quit Ghouta under a Russian-brokered deal were bused out on Thursday and started arriving in the northwestern province of Idlib on Friday.

An AFP reporter in the province, the last still largely outside government control, saw the first buses arrive at a camp after spending the night on the edge of rebel-held territory.

Around 400 fighters from the Islamist group Ahrar al-Sham and hundreds of their relatives were bused out of Harasta, a modus operandi the regime has used several times in the seven-year-old war.

"Our situation in Harasta was very tragic," said Abu Mohammed, a civilian who arrived at a camp for the evacuees in the town of Maarat al-Ikhwan.

"We couldn't live above ground because of the heavy bombardment... Some children stayed in basements for four months with no food. We couldn't even find fodder to eat," he said.

On Friday, a further 30 buses carrying hundreds of fighters and civilians from Harasta awaited in a buffer zone to move into regime-held territory, state television said. 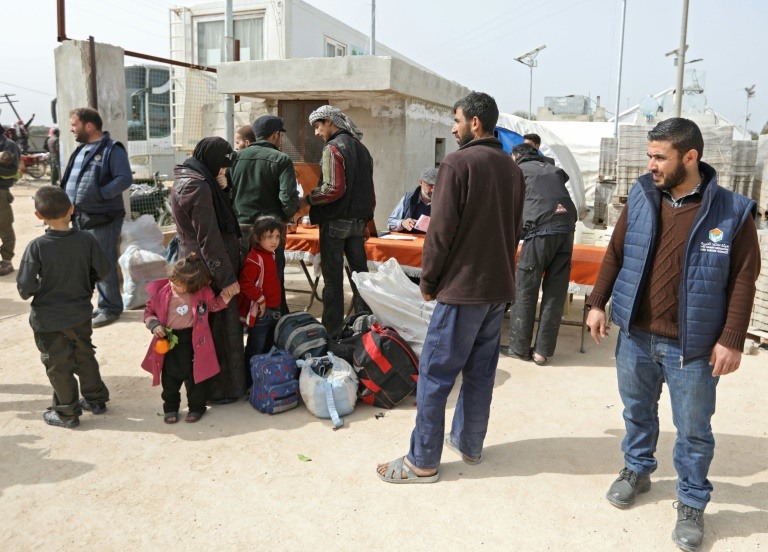 Syrians evacuated from the rebel-held Eastern Ghouta town of Harasta arrive at a camp for displaced people at Maaret al-Ikhwan in rebel-held territory in the northwest on March 23, 2018. (Photo: AFP)

On the regime-held side of Harasta, an AFP correspondent said Syrian soldiers fired celebratory gunshots into the air after they heard of the deal to evacuate the second pocket of the enclave.

Retaking Eastern Ghouta, a sprawling semi-rural area which had escaped government control since 2012 and lies within mortar range of central Damascus, was made a priority by the regime this year.

Harasta's evacuation came as part of a deal negotiated by Russia, which has played a key role in the deadly offensive launched against the enclave on February 18.

Each one of the three pockets has come under intense bombardment, essentially forcing the rebels that control them to sue for an evacuation.

Ahrar al-Sham had made some demands in the talks but were pummelled into accepting whatever conditions were imposed to them.

"The one thing they got was that they were able to leave without being killed," said Nawar Oliver, an analyst at the Turkey-based Omran Centre. 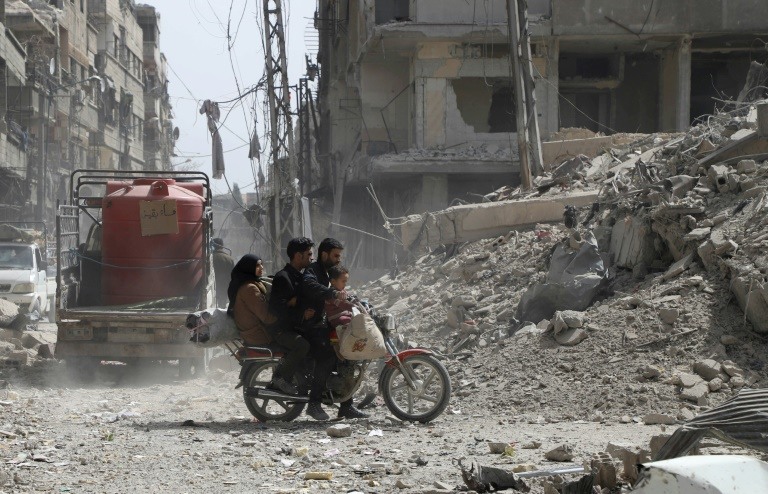 Syrians use a motorcycle to get through the rubble left by heavy bombardnt of the rebel-held town of Zamalka on March 22, 2018. (Photo: AFP)

At least 37 civilians were killed in Russian strikes using "incendiary weapons" late Thursday in Arbin, said the Observatory, which relies on a wide network of sources on the ground.

Another 38 were killed on Thursday in other bombardment on the same southern pocket controlled by Faylaq al-Rahman.

The Islamist group shortly afterwards said it was agreeing to a ceasefire, adding that the truce would permit "a final round of negotiations" between rebels and Russia. 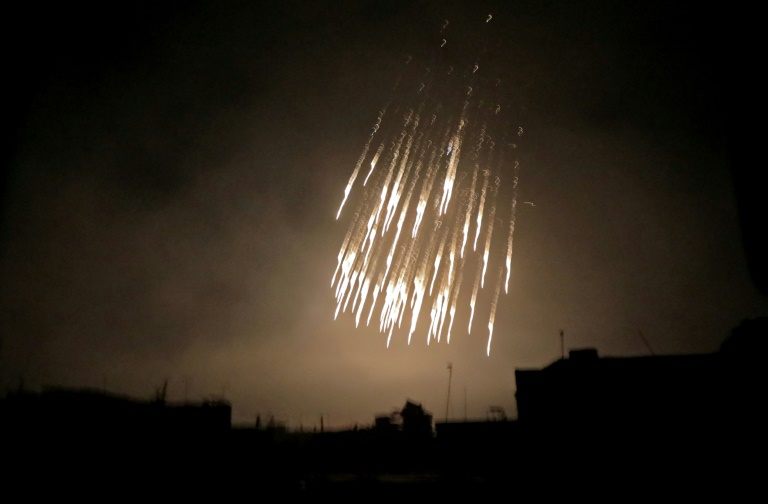 "The humanitarian situation continues to be catastrophic, with no food, emergency items nor medical supplies and outbreaks of disease due to civilians stuck in crowded and insalubrious basements," Faylaq al-Rahman spokesman Wael Alwan told AFP.

"There are cases of lice and scabies," the Turkey-based spokesman said.

AFP video and pictures from Douma, which is controlled by the rebel faction Jaish al-Islam, showed bright white streams falling from the sky in a fashion consistent with incendiary munitions.

Those negotiations could lead to a different type of deal whereby rebels get to stay as part of local policing force once the regime takes over, Observatory chief Rami Abdel Rahman said.

The offensive on Eastern Ghouta has caused widespread outrage and marked one of the darkest episodes of a war that entered its eighth year this month.

The Observatory says that more than 1,600 civilians have been killed in just over a month.