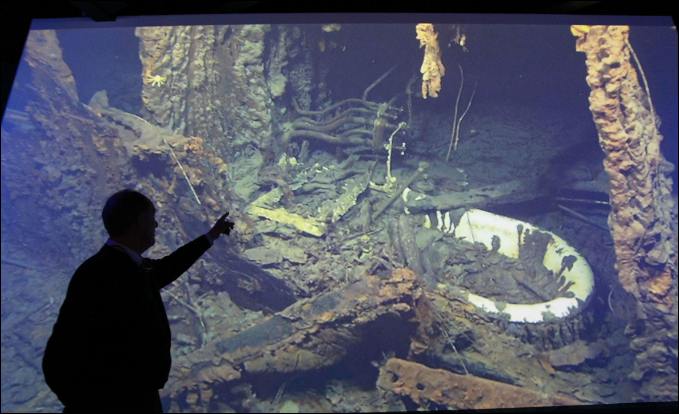 Robert Ballard, a professor of oceanography, points to his footage of the wreck of the Titanic that is part of the exhibition on display in Belfast, Northern Ireland, on April 14, 2012. (Photo: IC)

An international team of deep-sea explorers has revealed the rapidly deteriorating state of the Titanic, in the first expedition to the wreck in nearly 15 years.

The researchers said the ship's interiors remain well preserved, but much of the wreck is collapsed, corroded and encrusted in "rusticles" of brittle, deteriorated metal. Salt corrosion, metal-eating bacteria and deep current action are having the greatest impact on the wreck, which lies 3,800 meters down in the Atlantic.

Titanic historian Stephenson described the deterioration of the ship, first discovered in 1985, as "shocking".

"The most shocking area of deterioration was the starboard side of the officer's quarters, where the captain's quarters were," he said. "The captain's bathtub is a favorite image among Titanic enthusiasts, and that's now gone. That whole deck hole on that side is collapsing, taking with it the staterooms, and the deterioration is going to continue advancing."

He said the sloping lounge roof of the bow section would probably be the next part to be lost, obscuring views of the ship's interior. "The Titanic is returning to nature," he added.

The Titanic, built by Belfast's Harland and Wolff shipyard, sank after hitting an iceberg on her maiden voyage from Southampton to New York in 1912, resulting in the deaths of more than 1,500 people.

The team of experts and scientists captured the first ultra-high definition 4K quality images using specially adapted cameras, and their research will help assess the wreck's current condition and project its future, as well as making it possible to visualize the wreck using augmented reality and virtual reality technology.

Lori Johnson, a scientist on the project, said: "The future of the wreck is going to continue to deteriorate over time, it's a natural process. These are natural types of bacteria, so the reason that the deterioration process ends up being quite a bit faster, is a group of bacteria, a community working symbiotically to eat, if you will the iron and the sulfur."

Vescovo, a submersible pilot, said: "It's a big wreck, I wasn't quite prepared for how large it was. It was extraordinary to see it all, and the most amazing moment came when I was going along the side of the Titanic and the bright lights of the submersible reflected off a portal and came right back, it was like the ship was winking at me. It was amazing."