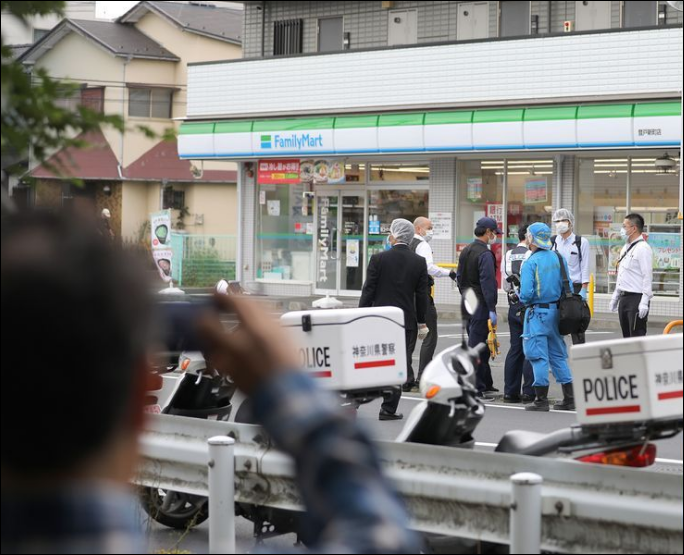 Police officers investigate on the site of a stabbing rampage in Kawasaki of Kanagawa Prefecture, west of Tokyo, Japan, May 28, 2019. (Photo: Xinhua)

Disturbed by the recent appalling murder cases in Japan regarding social recluses, the nation has expressed concern over the socially alienating middle-aged group living with their elderly parents.

A stabbing rampage in Kawasaki near Tokyo last week killed an elementary school girl and a man in his 30s, which also saw the assailant die of a self-inflicted injury.

The mass stabbing was committed by a 51-year-old man who reportedly hardly left his home when he lived with his uncle and aunt in their 80s.

A murder case of father killing his son was prompted by the Kawasaki stabbing four days later. A former senior government official, after stabbing his 44-year-old reclusive son to death, told the police that the knife rampage had raised fears that his son could also "hurt others," according to local media reports.

In Japan, the number of people who segregate themselves from society and stay in home with no jobs in the 40-64 age group amounted to a total of 613,000, exceeding the 541,000 recluses aged 15 to 39, according to a government survey released in March.

About 40 percent of the reclusive group attributed their withdrawal from society to retirement, possibly under the influence of the "employment ice age" in Japan when new graduates found it hard to secure jobs for about 10 years from the late 1990s.

As the parents of social recluses, known as "hikikomori" in Japan, grow older, the so-called "8050 problem" has emerged, in which parents in their 80s and their children in their 50s find themselves in a financial bog.

Ryuichi Iwasaki, the culprit of Kawasaki stabbing which also injured dozens of school students, had been unemployed for a long time and depended on allowances from his uncle and aunt, local officials disclosed after the incident.

His aunt always left meals for him in a refrigerator and he rarely went out of his room or even saw them.

His aunt has told local government that she thought Iwasaki had his own ideas about disconnecting himself from others.

In the murder case prompted by the knife attack, 76-year-old Hideaki Kumazawa, a former vice minister for agriculture, forestry and fisheries, called police to say that he had stabbed his son to death. His son was also described as almost having no face-to-face social interaction.

However, some social groups have urged the public not to view hikikomori as "potential criminals," expressing discontent over media coverage that emphasized Iwasaki as a recluse.

They are concerned that linking crimes to such people could exacerbate the problem by spreading misunderstanding and prejudice.

"The state of being hikikomori cannot be identified as the cause of the incident," Tokyo-based KHJ national federation of families with social recluses, said in a statement, referring to Iwasaki's knife attack.

"Such media reports and remarks by experts will encourage prejudice and drive them and their families into a corner," the group said.

"If the image of hikikomori continues to be distorted, they and their families...may feel even greater anxiety and despair of connecting with society," said Hikikomori UX Kaigi, a group composed of current and former recluses, in a statement.

Teruo Miyanishi, a psychiatrist and honorary professor at Wakayama University, was cited by local media to express concern and call for expanding public consultation services.

"It is becoming more and more difficult for families to reveal that they have a reclusive child, as society is becoming colder," said Miyanishi who has been supporting hikikomori since the 1980s.

"There are problems that are distinctive to middle-aged people who have been reclusive for a long time," Miyanishi said. "Places with psychologists and psychiatrists who are well-versed in them should be increased from now on."