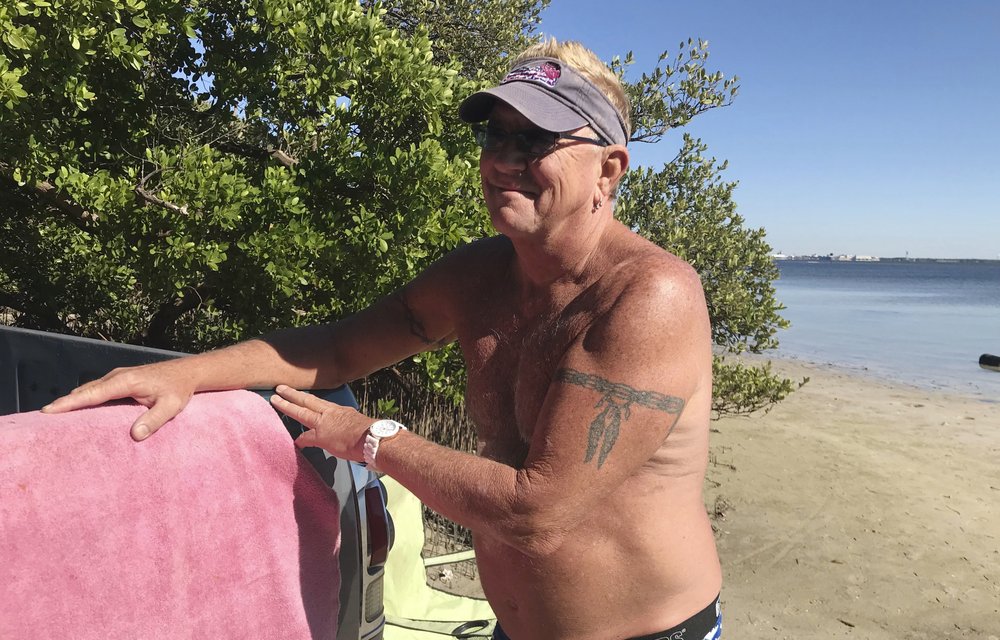 In this Nov. 16, 2018 photo, Mark Toepfer, a 58-year-old from Pinellas Park, reflects on the state's election while at the beach in St. Petersburg, Fla. Toepfer wondered why the state has so many problems counting ballots this year. (Photo: AP)

Mark Toepfer came to this spit of sand on the Tampa Bay shore to soak up the sun, drink a beer and maybe do a little fishing — not to talk about elections.

But talk he did when asked for his thoughts on whether Florida, as a judge recently put it, is “the laughingstock of the world” when it comes to voting.

“We’re the only state that has problems year after year,” the shirtless 58-year-old said, shaking his head. “Why is it like this? Is it the people in charge? Are our machines not like other states’ machines? Fraud? Incompetence? It’s hard to say.”

With races for US Senate and governor still undecided, the state’s latest recount only adds to its reputation for bungling elections. To much of the world, vote-counting confusion is as authentically Florida as jam-packed theme parks, alligators on golf courses and the ubiquity of Pitbull (the Miami rapper, not the dog).

Florida’s history of election woes dates back to 2000, when it took more than five weeks for the state to declare George W. Bush the victor over Vice President Al Gore by 537 votes, thus giving Bush the presidency. Back then, punch-card ballots were punch lines. Photos of election workers using magnifying glasses to search for hanging chads and pregnant chads symbolized the painstaking process.

There are no chads this year, but there are plenty of cracks about flashbacks to the Bush-Gore contest. And, just as in 2000, the Republican candidates in the contested races have declared themselves winners and asked for the recount to stop.

Add to this a litany of other voting problems: Palm Beach County’s machines went on the fritz during the recount due to age and overwork. The electricity went out in Hillsborough County during a machine recount and resulted in an 846-vote deficit. Broward County missed the state deadline to turn in recount results by two minutes.

Those glitches led US District Judge Mark Walker to ask why state officials have repeatedly failed to anticipate problems in elections.

“We have been the laughingstock of the world, election after election, and we chose not to fix this,” he said. Walker is presiding over one of several election-related lawsuits that have been filed since Nov. 6.

On Friday, election workers in all 67 counties began recounting by hand about 93,000 ballots that were not recorded by voting machines.

“How will Florida handle this recount? Not great,” she said. “Florida is a mess. The people are confused and the system is corrupt.”

But some others, like 74-year-old Dunedin resident Mary Sanders, said the “laughingstock” comment, and all the jokes, are unwarranted.

“I don’t think that now that I live here,” the New Jersey transplant said. “I guess I’m becoming more pro-Florida.”

Sanders, a volunteer with the League of Women Voters, spent Thursday in a windowless room at the Pinellas County election supervisor’s office with dozens of other observers, watching officials scrutinize ballots. She said the world doesn’t see the normal side of Florida during times such as this.

“Here in Pinellas County at least, it’s been a very well-run election,” she said. Indeed, the recount there has been run like clockwork, with election officials giving tours of the ballot warehouse and handing reporters detailed agendas of daily activity.

Paul George, a Miami historian, isn’t so certain about Florida’s reputation, or as charitable as Sanders.

George thinks part of the problem is that, to some degree, people come to Florida to start over. The traditions and habits they had elsewhere aren’t the same in the Sunshine State.

“It’s different here,” he said. “If you’re back home in, say, Ohio, you know the people at the precinct.”

And the state has many new citizens, he said, along with confusing ballot designs. Or perhaps, he mused, election drama is something intrinsic to Florida.

That’s when the US had a hotly contested presidential election. The winner wasn’t certain until March 2, 1877. Democrat Samuel Tilden won the popular vote, and Republican Rutherford B. Hayes won the Electoral College. Allegations of fraud abounded.

Votes from three states were disputed. Which state had problems?