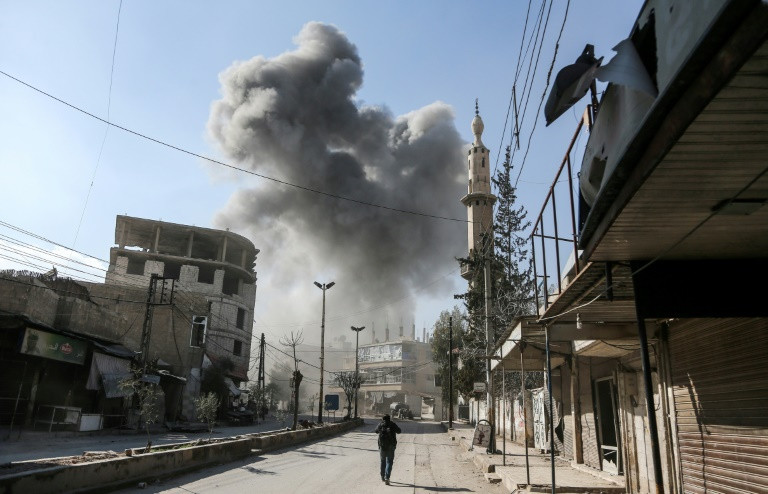 A picture taken on February 21, 2018 shows a smoke plume rising following a reported regime air strike in the rebel-held enclave of Hamouria in the Eastern Ghouta. Photo: AFP/Abdulmonam Eassa

The Red Cross demanded access Wednesday to a rebel-held enclave near Damascus where Syrian jets have been raining bombs in a four-day blitz that has killed more than 300 civilians.

The United Nations chief Antonio Guterres described the death and devastation that has engulfed Eastern Ghouta since Sunday as "hell on earth" while France asked for an immediate truce.

Fresh air raids on several parts of the enclave killed at least 38 civilians and sent 250 more people to hospitals that have also been targeted, leaving many out of service.

The International Committee of the Red Cross said the situation was so dire that its teams should be allowed access to Eastern Ghouta to help overwhelmed doctors and nurses.

"The fighting appears likely to cause much more suffering in the days and weeks ahead, and our teams need to be allowed to enter Eastern Ghouta to aid the wounded," said Marianne Gasser, ICRC's head of delegation in Syria.

Syrian warplanes have this month intensified their strikes on the area, which lies just east of Damascus and is home to around 400,000 civilians.

"Wounded victims are dying only because they cannot be treated in time," Gasser said. 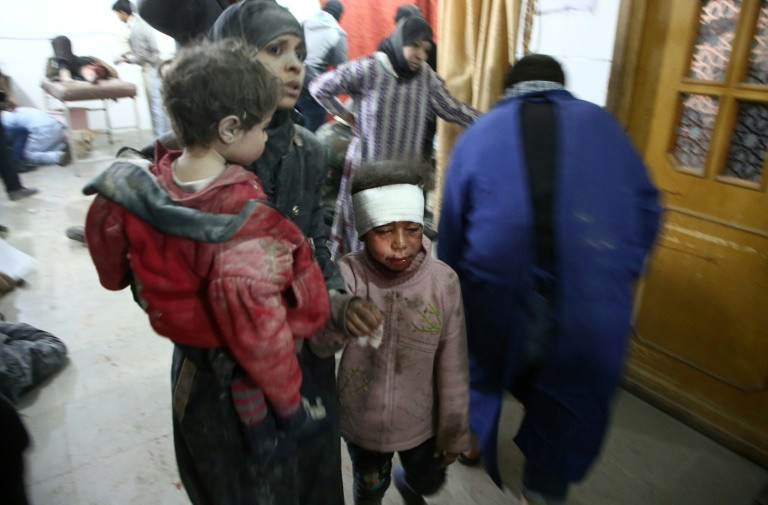 According to the Syrian Observatory for Human Rights, around 1,500 people have been wounded since Sunday in the one of the bloodiest episodes of Syria's seven-year-old war.

Many of Wednesday's victims were killed when barrel bombs -- crude, improvised munitions that usually cause indiscriminate damage -- were dropped on the town of Kfar Batna.

The hospital in Douma, the largest town in Eastern Ghouta, is still functioning but the influx of wounded is such that doctors and nurses cannot save everyone.

"We received a mother yesterday who was pulled from the rubble. She was six-months pregnant and seriously wounded," said surgical nurse Maram.

"We did a C-section but could not save her, nor her baby," she said.

Observatory head Rami Abdel Rahman said at least 72 children were among the 310 people killed in strikes since Sunday.

The bloodshed prompted UN children's agency UNICEF to issue a largely blank statement saying "we no longer have the words to describe children's suffering."

Guterres told the UN Security Council he was "deeply saddened by the terrible suffering" of civilians in Eastern Ghouta where he said people "live in hell on Earth." 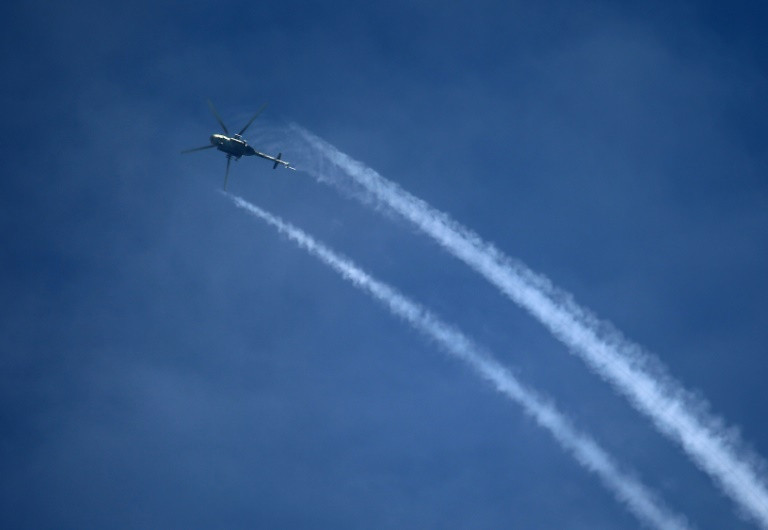 He called for an immediate humanitarian truce, as did French President Emmanuel Macron who accused Syrian President Bashar al-Assad's regime of using the fight against terrorism as a "pretext" to attack civilians.

Russia, which is Assad's main backer but has denied direct involvement in the strikes on Ghouta, promptly called for a meeting of the Security Council on the issue.

Ambassador Vassily Nebenzia told the council that the open meeting would allow all sides to "present their vision, their understanding of the situation and come up with ways of getting out of this situation."

With the Islamic State group's once sprawling "caliphate" now wiped of the map, the regime looks bent on completing its reconquest by taking on remaining enemies.

In recent days, government forces have been massing around Eastern Ghouta, apparently preparing for a ground offensive. 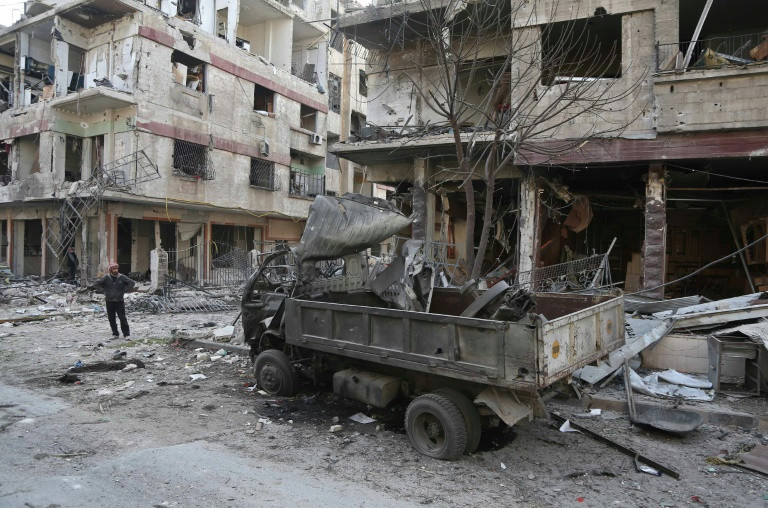 A Syrian surveys the destruction following an air strike on the rebel-held Eastern Ghouta town of Hamouria on February 21, 2018. AFP/Abdulmonam Eassa

"We have long feared Eastern Ghouta will see a repeat of the terrible scenes observed by the world during the fall of east Aleppo and these fears seem to be well founded," said Mark Schnellbaecher, the regional head of the International Rescue Committee.

The battle that saw government forces wrest back the country's second city from rebel forces in 2016 caused extensive destruction and suffering that drew comparisons with the World War II era devastation in Stalingrad and the Warsaw ghetto.

The regime is also seeking to restore its grip on other areas in the north, including the province of Idlib, the last one that remains largely outside its control.

On Tuesday, regime forces deployed inside the region of Afrin, a Kurdish enclave along Syria's northern border with Turkey.

The move came after Kurdish forces asked Damascus to protect it from a month-old offensive by Ankara.

They quickly came under shelling by Turkish forces, who said they had fired "warning shots" at the "pro-regime terrorist groups".