After losing his job last month, Nashawn Cooper waited more than four weeks as the bills piled up and his bank account dwindled to four dollars before the US state of Georgia approved his claim for unemployment benefits. 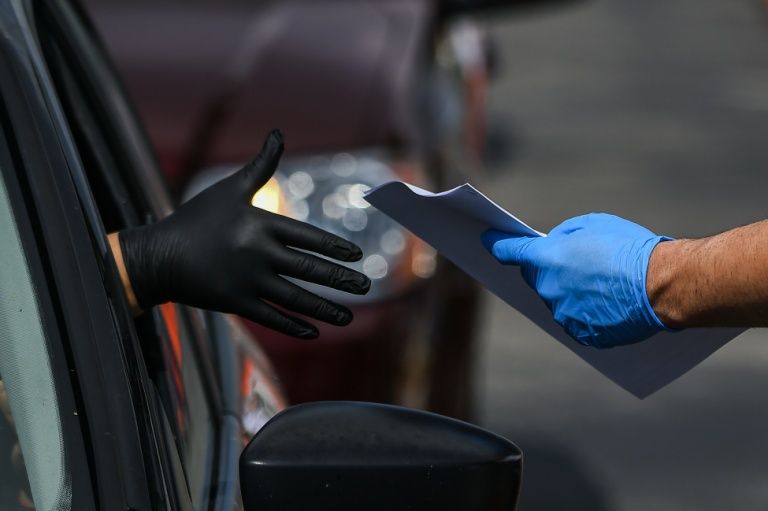 People lined up in their cars in Hialeah, Florida to receive a paper application for unemployment benefits -- the only way many could apply (Photo: AFP)

"I didn't know what I was going to do," Cooper, 36, told AFP in a phone interview from his home in Atlanta after finally being approved. "It feels like they heard my anger... like they felt my frustration and they acted fast on it."

Others are still waiting.

With at least 17 million Americans pushed out of their jobs since mid-March by the coronavirus pandemic, state offices that pay unemployed workers cash assistance are drowning in a tsunami of claims -- the extent of which will be further revealed in new Labor Department unemployment data set for release on Thursday.

Governors across the United States are scrambling to relieve their overburdened bureaucracies as the newly jobless sit at home, watching their bank accounts dwindle and hoping assistance arrives soon.

"At the end of this month, I'm done," said Reuben Isaacson of Boca Raton, Florida, who was laid off from an e-commerce startup last month.

With his unemployment claim pending since the first week of March, the 25-year-old skipped his most recent rent payment and is relying on his mother for money.

"When the moratorium on evictions are lifted and Florida hasn't paid anybody any money, a bunch of people are going to be homeless and that includes me," he said.

Each state runs its own program but follows federal guidelines and receives an allocation from Washington that's based, in part, on the unemployment rate -- which last year was at a historically low 3.7 percent.

Yet, administering the benefits "is just not something people think about outside a recession," Evermore said. "No state is handling this comfortably."

In New Jersey, the governor has made a public appeal for volunteer programmers skilled in COBOL -- a programming language from 1959 that the state and many others still rely on for their administration systems.

Near Miami last week, people lined up in their cars and spent hours waiting just so an official could hand them a paper form required to apply for unemployment.

The bizarre arrangement was necessary because the state's website and phone system had buckled under the pressure of so many applicants and the only other option -- printing and mailing an application -- wasn't feasible because most store were closed and many people don't own a printer.

Inverness, Florida resident Jessica Milisci filed online for unemployment more than four weeks ago after being furloughed from her job at a hotel company. Then she waited. And waited.

At first, she called the unemployment office 100 to 150 times a day, but after so many instances of her call simply being disconnected she almost gave up.

"It has tapered off due to huge disappointment," 45-year-old Milisci said. On Wednesday, after the intervention of Governor Ron DeSantis's office, her claim was approved.

"Very happy with the response, but why did I have to go that direction?" she asked.

Florida in the southeastern US is one of several states which in recent years has made it more difficult for the unemployed to get benefits, Evermore said, and such states "aren't in a great position to process benefits now, much as they may want to."

Florida also caps its maximum weekly benefit at $275, while neighboring Georgia's is $365, and though a $2.2 trillion stimulus bill approved by Congress temporarily adds $600 per-week to the payments, that too is taking time to phase in.

Beneficiaries are receiving back pay for the weeks they waited, which Cooper said would give him a cushion until he can return to his job in food service at the Atlanta zoo.