WORLD Referendum on independence is only 'a matter of when, not if '

Referendum on independence is only 'a matter of when, not if ' 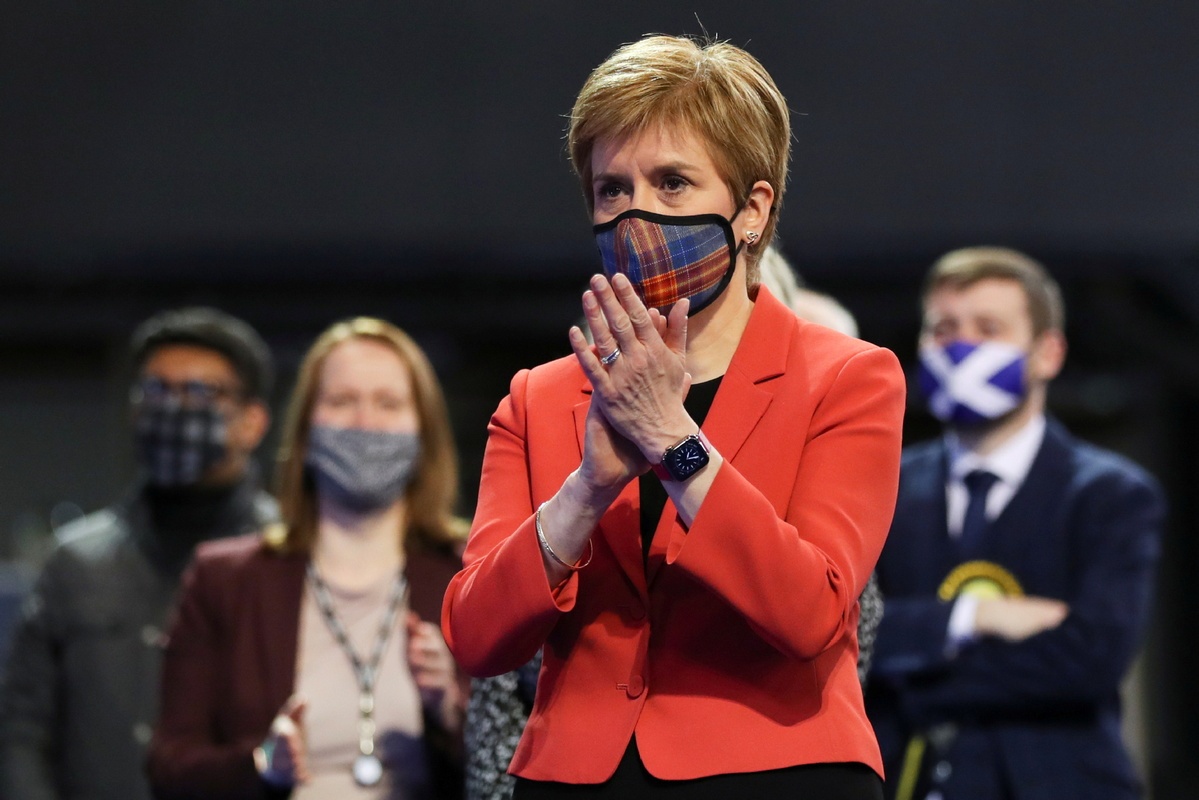 Scottish First Minister Nicola Sturgeon reacts as she visits a counting centre as votes are counted for the Scottish Parliamentary election, in Glasgow, Scotland, Britain, May 7, 2021. (Photo: agencies)

The reelected first minister of Scotland has told the United Kingdom's prime minister it is only a matter of time before a second referendum on Scottish independence is held.

Nicola Sturgeon, who heads the independence-seeking Scottish National Party, delivered the message in a call with Boris Johnson on Sunday; their first since elections on Thursday delivered results from which both could draw strength.

Sturgeon reportedly told Johnson during the call that a second referendum was "a matter of when, not if".

Sky News noted that the SNP fell one seat short of an outright majority in the devolved Scottish Parliament but would be able to draw on the support of other pro-independence parties to get legislation passed.

Sturgeon reportedly said she does not want the issue of whether a referendum is held or not decided by the courts, a sentiment, the BBC said, that the UK government shares.

An SNP spokeswoman said of the phone call between the leaders: "The (first minister) also reiterated her intention to ensure that the people of Scotland can choose our own future when the (novel coronavirus) crisis is over."

The BBC quoted a spokesman for the UK government saying: "They both agreed that their immediate focus should be on working together to build back from the pandemic."

Sturgeon said on The Andrew Marr Show she hopes the virus threat will have subsided and the economy stabilized enough for a referendum on independence to be held "within the first half of the parliamentary term".

"I desperately hope those predictions are correct but we have to judge that as we go through this year," she added.

The United States television news channel CNBC said the renewed bid for Scottish independence "threatens to overshadow Westminster in the weeks and months ahead", as Johnson unveils new steps out of the UK's novel coronavirus lockdown.

His government was set to announce the latest relaxations on Monday evening, which were expected to include a reopening from May 17 of indoor hospitality venues, and a resumption of household mixing. Experts expected Johnson to also allow hugging, and the take-off of international travel.

Johnson, who was buoyed over the weekend by the ruling Conservative Party's surprisingly good performance in local government elections in England and an astonishing win in a by-election for a member of Parliament in the traditionally Labour Party-supporting riding of Hartlepool, was also expected to announce that people will be able to meet outdoors from May 17 in groups of up to 30.

The prime minister was also set to say overnight stays in homes would again be acceptable.

Ironically, some pundits observed, the sooner things return to normal and the pandemic threat subsides, the sooner the Scottish independence issue is likely to resurface.