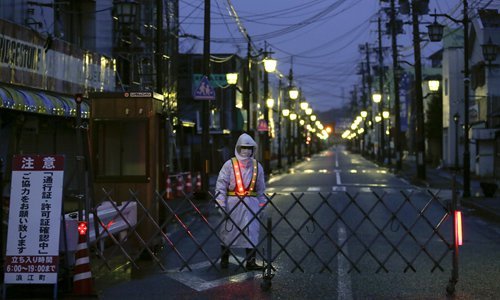 Regional countries have been outraged by Japan's potential move to discharge Fukushima contaminated water into the Pacific Ocean, which intensified over the weekend after a report saying that the 1 million ton of radioactive water could damage human DNA.

Observers said the issue will be a long-term factor in Asia-Pacific stability and become a barrier to economic and social exchanges. They urged Japan to enhance transparency on the Fukushima contaminated water and called for international cooperation at the government and non-government organization levels to review and supervise the condition of the nuclear plant.

The Japanese government is yet to decide whether to proceed with the plan to discharge the 1 million ton of water into the Pacific. In early September, Japan's environment minister Yoshiaki Harada said that to "release it into the ocean and dilute it" is the only solution, but the government postponed the decision on Friday.

The event drew global attention after Greenpeace, also on Friday, released a report on Fukushima, coming with the shocking finding that the radioactive isotope carbon-14 in the water that Japan is planning to dump "has the potential to damage human DNA."

The topic triggered controversy in China, with the hashtag "Japan might discharge 1 million tons of nuclear water" receiving 130 million reads with more than 13,000 discussions as of press time on Sina Weibo. "For health, for genetics, would you eat fish afterwards?" a Weibo user said.

Environmental experts noted that the contaminated water could affect the environment in China as well.

The radioactivity will spread through ocean currents. For example, the large releases that occurred from March 2011 show radioactive cesium reaching the East China Sea, Shaun Burnie, author of the report and senior nuclear specialist with Greenpeace Germany, told the Global Times on Monday.

While the levels of any future discharge from Fukushima in the East China Sea would likely be low compared with levels along the Japanese coast, there is no justification for contaminating the marine environment with radioactive material, he noted.

Ma Jun, director of the Institute of Public and Environmental Affairs, said that despite the distance and ocean currents, the risks and uncertainties of the contaminated water remain due to the huge amount.

According to Ma, China built a monitoring and response mechanism after the Fukushima plant meltdown, which also influenced China to change its nuclear power development route, calling off plans to build nuclear plants at inland regions for safety.

While regional countries have shown great oppositions to Japan's plan, observers noted that the Fukushima nuclear water is both an environmental and political issue.

The Japanese government has been showing its irresponsibility and selfishness in dealing with the nuclear pollution from Fukushima, Jiang Lifeng, a senior research fellow at the Chinese Academy of Social Sciences, told the Global Times on Monday.

The Fukushima contaminated water will become an issue that brings instability to the Asia-Pacific region, Jiang said. For countries like China, the US, Russia and South Korea, the issue will be a barrier in future economic and social exchanges.

"Nearly ten years after the start of the disaster, TEPCO and the Japanese government are still covering up the scale of the crisis at Fukushima Daiichi," Burnie said.

We hope that the Japanese government will act with a high sense of responsibility toward its own people, neighboring countries and the international community, Zhao Lijian, spokesperson of China's foreign ministry, said on October 19 at a daily briefing, calling for Japan to disclose relevant information in a voluntary, timely, strict, accurate, open and transparent manner.

The Jeju governor in South Korea on October 20 threatened to sue Japan if it releases radioactive water into Pacific, including filing civil lawsuits and criminal complaints, Korea's Hankyoren reported.

"South Korea worries me the most because it is close to the location and would be affected by contaminated water first," Ma said.

South Korea's main concern is that the water, which has been filtered but is slightly radioactive, could reach South Korea and threaten the safety of the waters and environment, the Korea Herald reported.

The Daiichi Nuclear Power Plant in Fukushima went into meltdown and released radioactive material in the aftermath of a tsunami in March 2011.