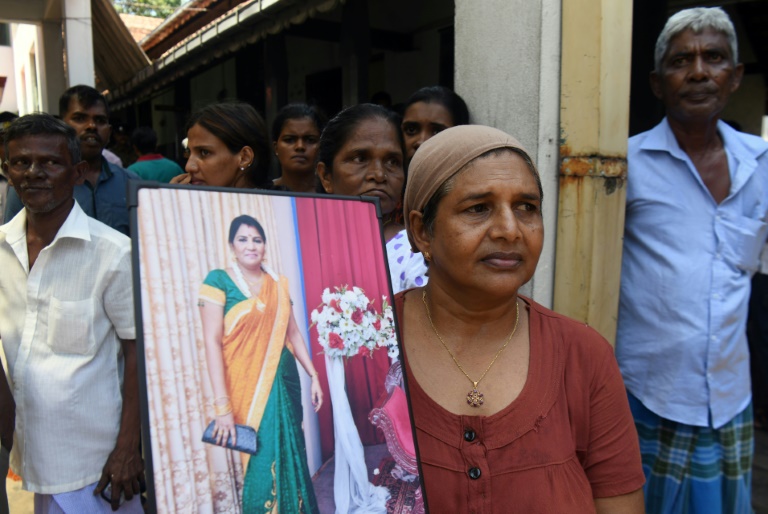 Some relatives held photographs of loved ones who they feared had died in the blasts. (Photo: AFP)

Some hid their eyes, some collapsed in tears as gruesome images of victims from Sri Lanka's Easter massacre were projected on to a screen in front of distraught relatives at a Colombo morgue on Monday.

The pictures of some of the 290 dead are disturbing, with faces battered and bodies missing limbs.

A Roman Catholic priest and a Buddhist counterpart waited in the corner of the courtyard to intervene when one of scores of people in the audience recognised a mother, brother or child.

Many of the dead from attacks on three churches and three luxury hotels have been taken to the government morgue and people queued in the heat to get into the heart-wrenching identification slideshow.

Eighteen bodies were released on Monday morning after relatives recognised a victim from the gruesome images shown in a corner of the morgue courtyard.

Identification is painstaking, physically and emotionally. Many badly mutilated bodies will only be identified with the DNA of relatives, officials said.

Janaka Shaktivel, 28, father of an 18-month-old son, sat in shock outside the building waiting for the body of his wife to be handed over.

The storeowner's wife died when a suicide bomber hit St Anthony's Shrine, one of Colombo's most famous churches.

Pale and grief-stricken, Shaktivel said he remembered lighting candles with his wife and baby.

"My baby started crying, I took him outside and my wife stayed inside.

"I was just at the door when I heard an ear-splitting sound. I rushed inside but there were unbelievable scenes. I frantically looked for my wife but couldn't find her."

Shaktivel went on a grim tour of Colombo hospitals and finally to the morgue, where he was one of many to be called up to see the images and then inspect a body.

"I recognised her body from the wedding ring that she always wore," he said. "I have no words to explain my feelings."

The family had identified two of the dead and were waiting to find others. The brother's wife is in intensive care in hospital with serious leg injuries.

"The baby was so cute, he was only eight months old," said Gomez. "His head was blown off, I have gone numb. What did he do to deserve this?"

As Gomez watched pictures of bodies flash up on the screen she broke down, slowly identifying her missing family one by one.

Still the queue built up outside and a mortuary official sat in front of a laptop at the entrance called out more names to enter.

Volunteers handed out water and juice to relatives entering the room.

"We are supporting the families. Lots of people have come here from faraway places," Father Lawrence Ramanayake told AFP.

"They are very poor people, we have to support them from the church," added the pastor. "The church is doing everything possible to help the families."

Police and doctors waited to greet families as they left the projection room, offering help. More Catholic nuns and priests waited to give advice on funerals.

"It's an unprecedented situation. We are doing our best," said a helpless morgue worker.