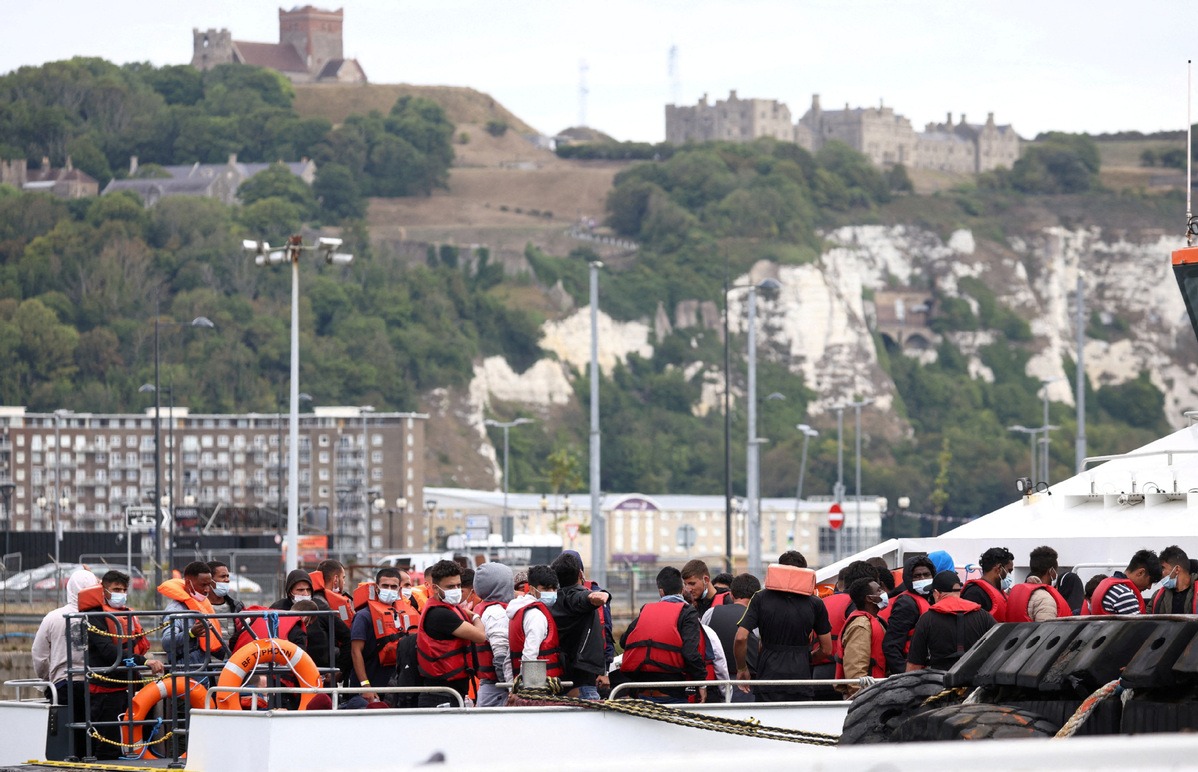 Migrants arrive at Dover harbour onboard a Border Force vessel, after being rescued while attempting to cross the English Channel, in Dover, Britain, Aug 24, 2022. (Photo: Agencies)

Relatives of 31 migrants who died in a tragedy in the English Channel one year ago have written to the United Kingdom's prime minister on the anniversary of the incident to urge him to ensure nothing like it happens again.

The families said in their open letter to Rishi Sunak that the 21 men, seven women, and three youths who perished on Nov 24, 2021 should have been rescued after making repeated calls to emergency services in both the UK and France, but that no help came and most slowly froze to death.

"We demand answers to why French and British authorities failed desperate people who came asking for help," the letter said. "We demand an end to the poisonous rhetoric used by our politicians — calling innocent refugees 'illegal migrants' or, worse, 'an invasion' — which breeds fear and division."

The letter was also signed by the charities Care4Calais, Channel Rescue, and Safe Passage, as well as several trade unions and lawmakers. It asks Sunak to grant "safe passage" to migrants wanting to enter the UK "to allow these refugees to claim asylum in Britain without risking their lives in the Channel".

The migrants who perished had left the French coast at around midnight on an inflatable boat operated by people-smugglers. The vessel subsequently began to deflate.

The UK and French emergency services each fielded calls for help from the group, and each nation said they thought the vessel was in the other's waters and that the other side would respond.

But neither nation sent out rescue teams in time and the bodies of those who perished were not retrieved until 11 hours later, when a French fishing vessel raised the alarm.

The BBC said on Thursday transcripts it has seen of emergency calls made to the French coastguard clearly show the calls for help came from French waters, and that they were not acted upon by the French authorities.

The French newspaper Le Monde said failings identified in an investigation by the Cherbourg Maritime Gendarmerie could lead to the French emergency services facing criminal charges for "non-assistance of persons in danger".

The newspaper also published a letter about the incident, signed by 65 UK, French, and Belgian humanitarian groups, that calls for safe passage to be granted to migrants wanting to enter the UK to be processed as refugees.

"The world … has looked away from the shipwreck, leaving the situation to endlessly carry on," the letter states. "All necessary means need to be put into place to open safe routes for passage for those who want them."

A UK government statement said London will not comment on the incident while it is under investigation, but that Britain is working "tirelessly with our international partners to disrupt the people-smuggling gangs behind these dangerous crossings".