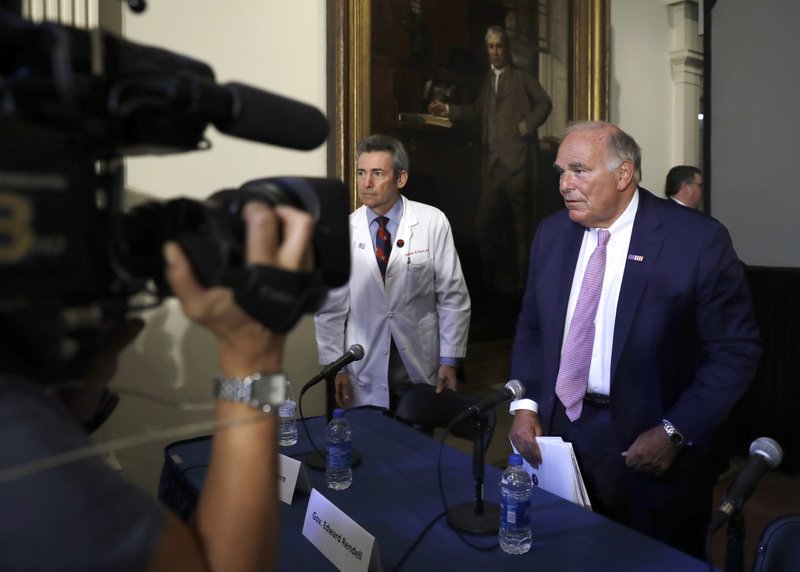 Former Pennsylvania Gov. Ed Rendell said Monday that he was diagnosed 3½ years ago with Parkinson’s disease, but said he believes that treatment has stopped the progression of the disease and he has maintained his quality of life.

The 74-year-old Rendell made the announcement at Pennsylvania Hospital in Philadelphia with officials and doctors from the University of Pennsylvania as part of a public service message to urge people who suspect they have symptoms to get diagnosed and get treatment early.

He was “stunned and a little bit scared” when he was diagnosed because he had always viewed himself as indestructible, he said.

But Rendell said treatment at the hospital, including medication, has stopped the progression of the symptoms and that he continues to keep a busy schedule, including working out six days a week.

“I’ve been more in a sort of battle mode than depressed,” Rendell said.

Rendell said he had not wanted to reveal his condition before he was certain whether treatment at the hospital was helping him.

“The good news is I can say without any fear of contradiction at least in my own mind that my disease has stabilized — progression has in many ways stopped,” Rendell said. “Some of the symptoms that I was undergoing are better now than they were 3½ years ago.”

His quality of life hasn’t changed, he said, in terms of the things he enjoys, what he eats and where he goes.

Rendell, a Democrat, was Pennsylvania’s two-term governor from 2003 through 2010. The outgoing former Philadelphia mayor with a larger-than-life persona smashed the state’s campaign fundraising records and went from the rough-and-tumble world of Philadelphia politics to the relatively stuffy state Capitol.

He became something of a national figure as a Democratic National Committee chairman during the 2000 presidential election. As a two-term Philadelphia mayor in the 1990s, he garnered the nickname “America’s mayor” after getting a reputation as a cheerleader for the city who would stop at nothing to promote it. He was the city’s No. 1 sports fan, even appearing as a regular on TV sports talk shows, and known for his love of indulgent foods, including cheesesteaks.

A lawyer, Rendell is also a former two-term district attorney of Philadelphia.

Dr. Matthew Stern, a University of Pennsylvania Health System neurologist, said the hospital is at a point where they can “significantly reduce” the effects of Parkinson’s disease.

Rendell, he said, kept a schedule in May that was “ridiculous. None of us would be able to keep up.”

Parkinson’s disease involves a loss of brain cells controlling movement. Besides tremors, it can cause rigid, halting walking, slowed speech and sometimes dementia. Symptoms worsen over time and there is no cure.

Rendell said his mother had Parkinson’s for the last 13 years of her life. He said he first noticed problems with his balance and his hands shaking 3½ years ago, when family members urged him to get it checked out.

“It turns out I wasn’t indestructible, none of us are,” Rendell said. “But I can be helped. All of us can be.”