Some 200 environmental and land defense activists were killed around the world in 2021, including some 54 in Mexico, which assumed the position of the deadliest country in the annual report by nongovernmental organization Global Witness. 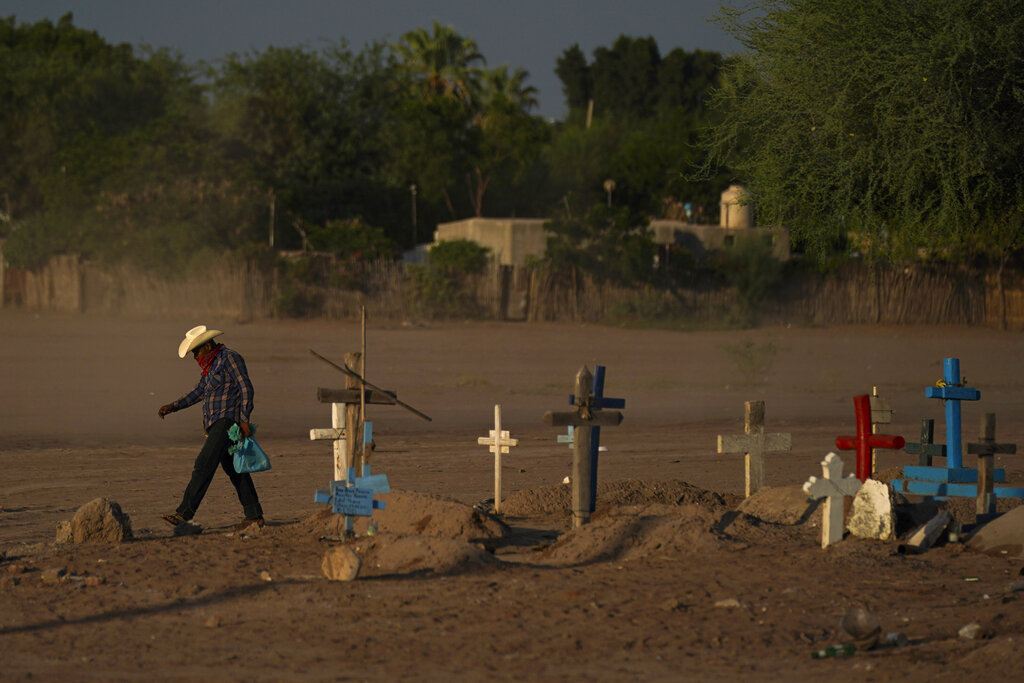 A Yaqui Indigenous wears a bandana over his mouth as he walks through dust past the cemetery where slain water-defense leader Tomás Rojo is buried in Potam, Mexico, Tuesday, Sept. 27, 2022. (Photo: AP)

It was the third consecutive year of increases for Mexico and a jump from 30 such activists killed in 2020.

“Most of these crimes happen in places that are far away from power and are inflicted on those with, in many ways, the least amount of power,” the report said.

Global Witness considers its report a baseline, noting “Our data on killings is likely to be an underestimate, given that many murders go unreported, particularly in rural areas and in particular countries.”

The victims died fighting resource exploitation and in land disputes. Conflicts over mining were tied to 27 deaths worldwide, the most for any sector.

Fifteen of those mining-related killings were in Mexico.

In the western Mexico state of Jalisco, José Santos Isaac Chávez was killed in April 2021. He was running for local office and had made opposition to a long-running mine a central part of his campaign. Days before the election, he was found dead in his car, which had been driven off a cliff and his body showed evidence of torture. Armed men had dragged him out of his home and driven him away in his own vehicle.

In April 2021, Sandra Liliana Peña Chocué, an Indigenous governor in southwest Colombia, who had fought for the eradication of coca crops in Caldono, Cauca was killed near her home by armed men. Her murder was condemned by the United Nations, nongovernmental organizations and foreign governments.

In the Democratic Republic of Congo, all eight recorded victims were killed inside Virunga National Park.

In November, conservation park ranger Chief Brigadier Etienne Mutazimiza Kanyaruchinya, 48, was killed when 100 heavily armed men, presumed to be former members of the M23 rebel group, attacked a patrol post near the village of Bukima in Congo’s North Kivu Province.

Virunga Park is home to some of the world’s last mountain gorillas, but armed groups such as the Democratic Forces for the Liberation of Rwanda, known by its French acronym FDLR, the Mai-Mai and the M23 regularly vie for control of eastern Congo’s natural resources.

Global Witness called on governments to enforce laws that protect activists and require informed consent from Indigenous groups, while also requiring companies to be accountable throughout their global operations and have zero tolerance for attacks on land defenders.

“Activists and communities play a crucial role as a first line of defense against ecological collapse, as well as being frontrunners in the campaign to prevent it,” Global Witness CEO Mike Davis said in the report.