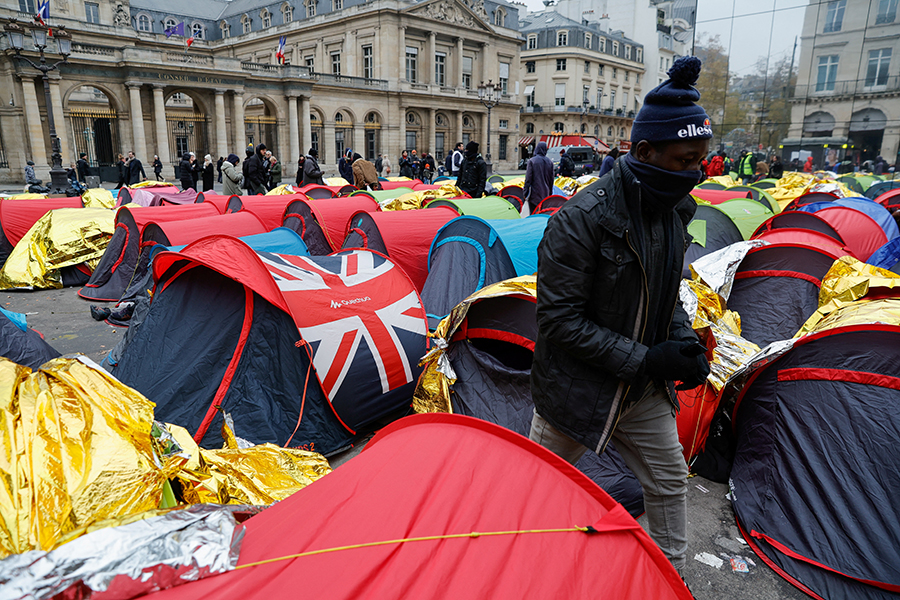 A tent protest is held outside the French Council of State in Paris on Sunday to highlight the lack of housing for migrants. [Photo/Agencies]

Migrants are increasingly likely to encounter violence at the European Union's edges, according to the Border Violence Monitoring Network.

In the second edition of the group's Black Book of Pushbacks released this past week, the organization, which describes itself as an independent network of non-government organizations mainly based in the Balkans and Greece, said migrants have reported beatings, dog attacks, head shavings, forced undressing, and sexual assaults when trying to cross the border.

The monitoring group added that thousands of migrants had also reported "illegal expulsions", or so-called pushbacks, from nations on the edges of the bloc.

The 3,173-page report was based on interviews with 733 people but contains anecdotes related to 16,000 migrants.

The group said many migrants' attempts to claim asylum in the EU were laughed off by the border guards and police officers who intercepted them. Only around 6 percent of those interviewed said they had not witnessed "excessive force". International law calls for anyone fleeing war or persecution to be allowed to claim asylum in the first safe country they reach.

Hope Barker, co-editor of the report, said the document took four and a half years to complete. She told The Guardian newspaper violence seemed to escalate during that time.

"In the beginning, it seems very sporadic, a few incidents," she said. "It became an overall, systematized approach that spread deep into the mainland."

She added that activists trying to help people enter the EU are frequently subjected to "smear campaigns" in the media, and must endure "increased police repression".

"In 2020, we published the first Black Book, with over 900 testimonies, and called for an end to the culture of impunity that surrounds human rights violations in Europe," Euronews quoted Barker as saying. "Two years later and illegal pushbacks continue unabated in spite of an increased evidence base, videos of perpetrators committing these crimes, and hundreds more testimonies."

Barker said Border Violence Monitoring Network wants an end to the violence and pushbacks, and for "perpetrators to be held accountable".