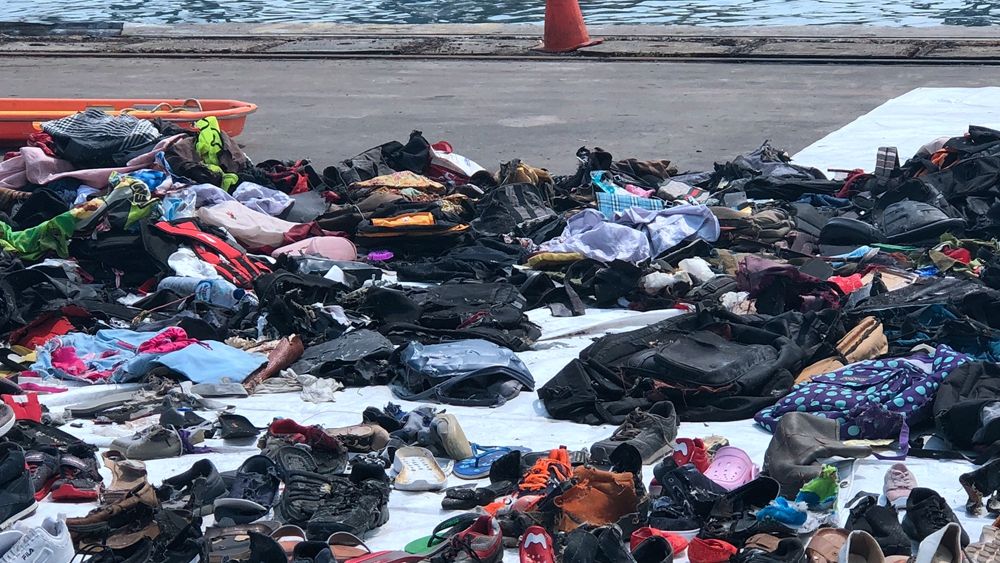 The news of Lion Air's flight JT610 crash dominated international news headlines this past week. After a couple of years of near-perfect safety record for Indonesia's aviation industry, this recent incident is a reminder of the country's past troubles.

Lion Air's new Boeing 737 Max 8 plane took off from Jakarta's Soekarno Hatta airport in the early hours of Monday morning (October 29) en route to Pangkalpinang. Just 13 minutes after taking off the plane plunged into the Java Sea. The events that transpired days after that crash has been nothing short of devastating, for the relatives of all of the 189 on board as well as the search and rescue team that is working tirelessly around the clock to retrieve the remaining debris.

I arrived at the Tanjung Priuk port, where the debris is being analyzed, just a day after the crash. By then, divers have already found several parts of the plane's wreckage along with few personal belongings such as cellphones, clothing items and shoes, some still looked brand new while others torn and tattered.

At one point, relatives were allowed to visit the port and sort through the belongings found to identify those that belonged to their loved ones that were on board. A heartbreaking scene as two women began pointing at shoes they recognized, sobbing uncontrollably at the thought that just a day before those shoes were worn by their friends or families. 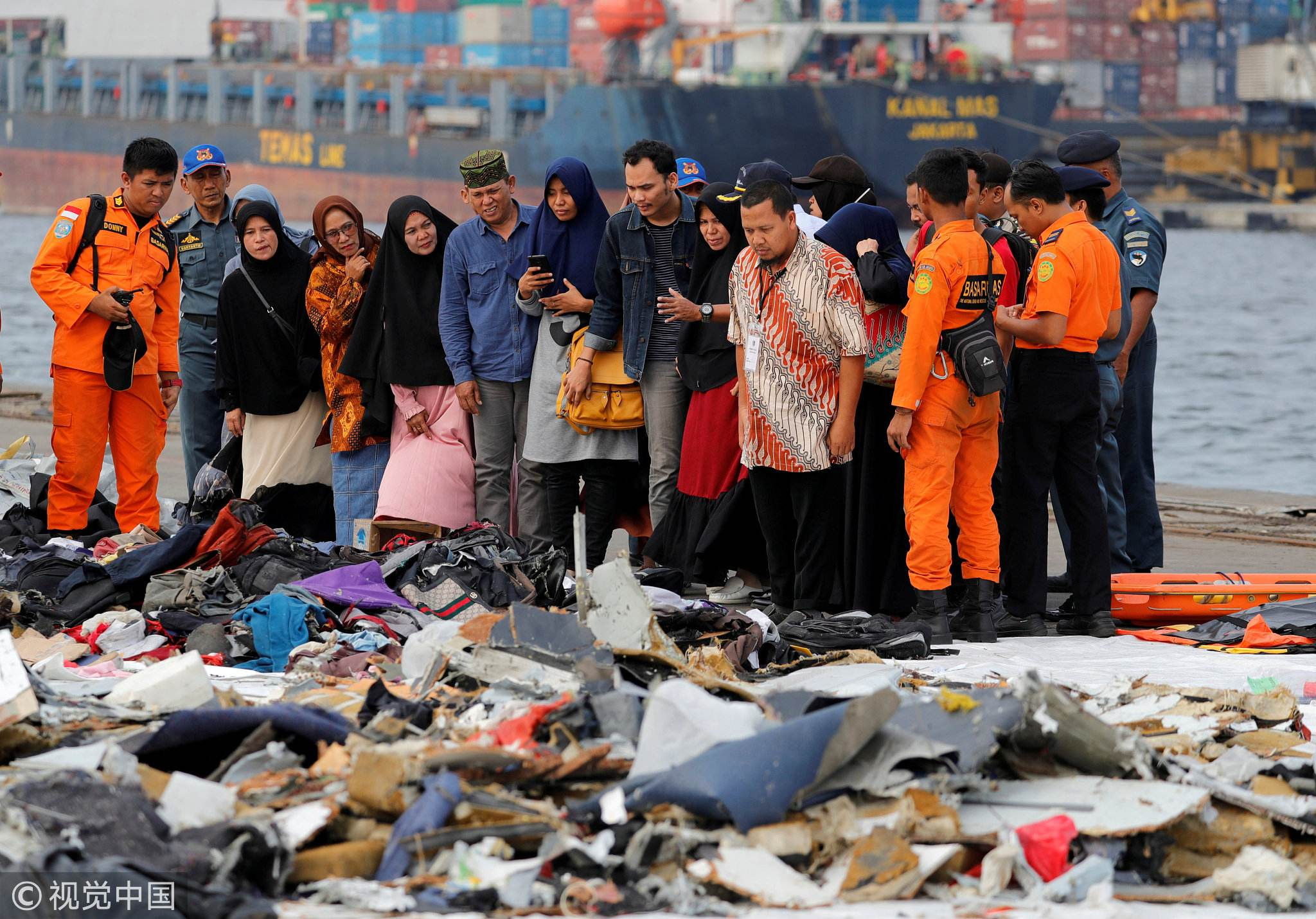 Families of passengers of Lion Air flight JT610 stand as they look at the belongings of the passengers at Tanjung Priok port in Jakarta, October 31, 2018. (Photo: VCG)

Among the debris was an almost-intact pair of infant shoes, light beige in color and on display in the scorching heat of Tanjung Priuk. Irdiyanti was one of the relatives that lost her family members on board. Speaking to me through sobs, she said her daughter, son-in-law and two grandchildren boarded the early morning flight that Monday because they wanted to arrive home early.

"They had never flown Lion Air before. It was always Citilink," said Irdiyanti referring to the sister company of Indonesia's national carrier, Garuda Indonesia. "But this time they decided to fly Lion Air because they were looking at options of an early flight," continued Irdiyanti.

She tells me her grandchildren were four and two years old. "I'm so close to them. They stay with me every few weeks and they are just like my children, you know what it's like. Grandmothers sometimes love their grandchildren even more than their own children. I never understood what that meant until my grandchildren were born. It's true. I love them so much," she said as tears rolled down her eyes. 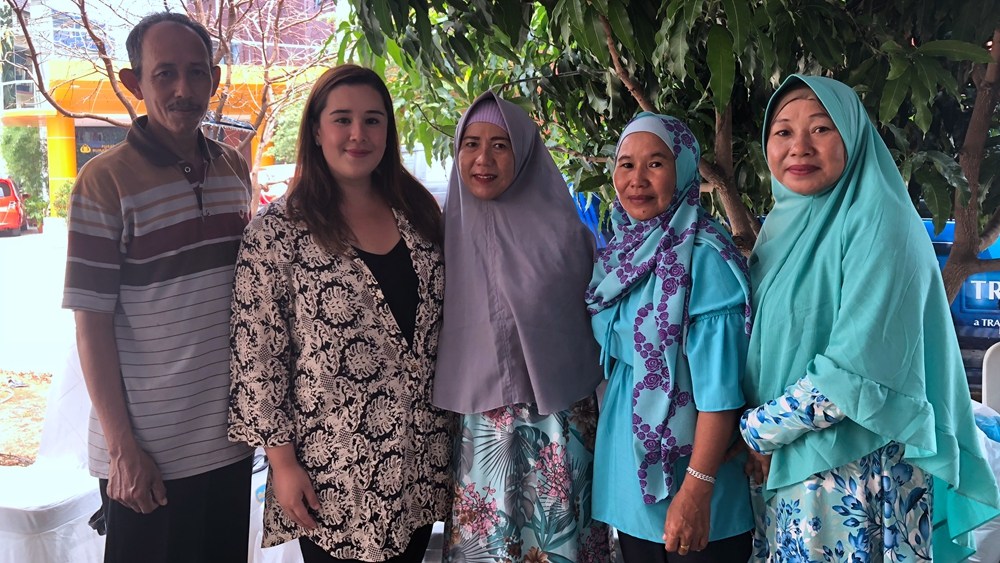 Irdiyanti and her family staying strong in the wake of tragedy. (Photo: CGTN)

Through this tragic incident, Irdiyanti could still tell me stories of the good memories she had with her missing family. She went on to laugh and joke while telling me that her daughter could never buy the right clothing size for her from Jakarta.

"I'm too small. Jakarta's clothing sizes are too big. But she never understands. She kept buying me clothes and more clothes," she laughed. She was accompanied by her husband and two friends who joked along with her lightening up the mood just a little bit.

I asked her if she had checked for DNA in the hospital. By now, authorities encourage the relatives to provide as much information as they can about their loved ones on board. What they were wearing, what they looked like, their approximate height, weight and etc. That helps authorities quickly identify bodies, should they find any.

"I have already given all of the information and documents I need to. I just want them to find my family so I can bring their bodies back home and bury them properly," said Irdiyanti.

But just like many of the relatives waiting for answers, Irdiyanti does not know when that will happen. "I'm going to stay in Jakarta until the search is over. I'm talking to you now because I want you to tell my story, once it is out, more people will send us prayers. We need prayers," she said. 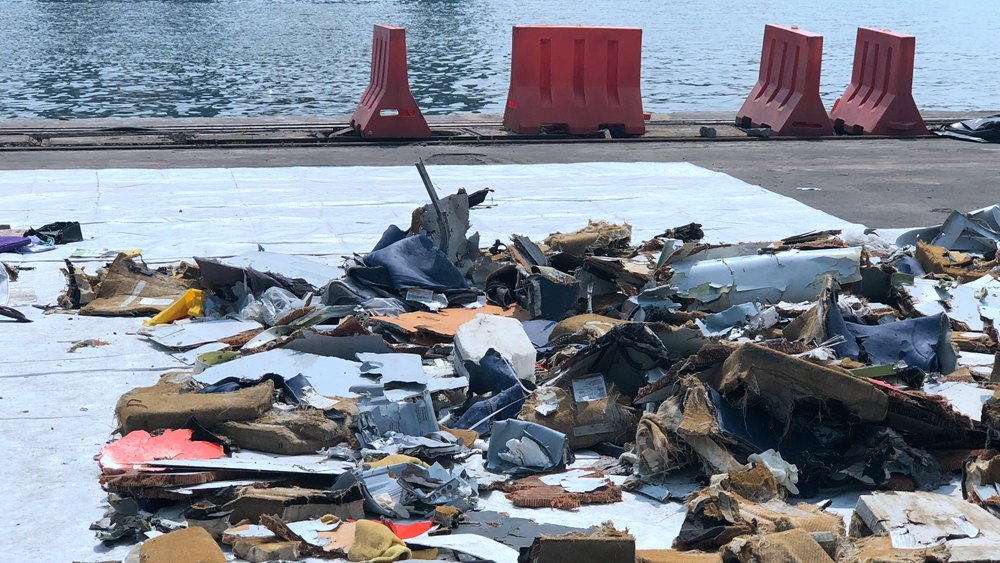 As I continue to listen to her stories, it became apparent that the investigation into this crash is very important. The Transportation Ministry along with the Indonesian government has to take serious action against companies that do not follow safety procedures before a flight.

It is known that the flight recorded issues just one day before it left Jakarta and yet it was still allowed to fly. Authorities must look into this issue clearly and transparently. If anything, the Lion Air crash is proof that passenger and crew safety must remain airlines' top priority. Although it is a budget airline, passengers' safety should not be compromised. Cheap tickets do not mean that you step into an aircraft fearing for your safety.

In the next few days, the search and rescue team will prioritize searching for the remaining bodies of the victims which they believe might still be strapped into their seats inside the body of the airplane, which they have yet to find as well. It is a daunting task and a challenging one as the search is focused underwater with heavy currents and strong winds but if the last few days is any indication of how the search will be in the coming weeks, the relatives of those passengers and crew that were on board could be closer to finding out exactly what happened minutes before the aircraft crashed into the sea.