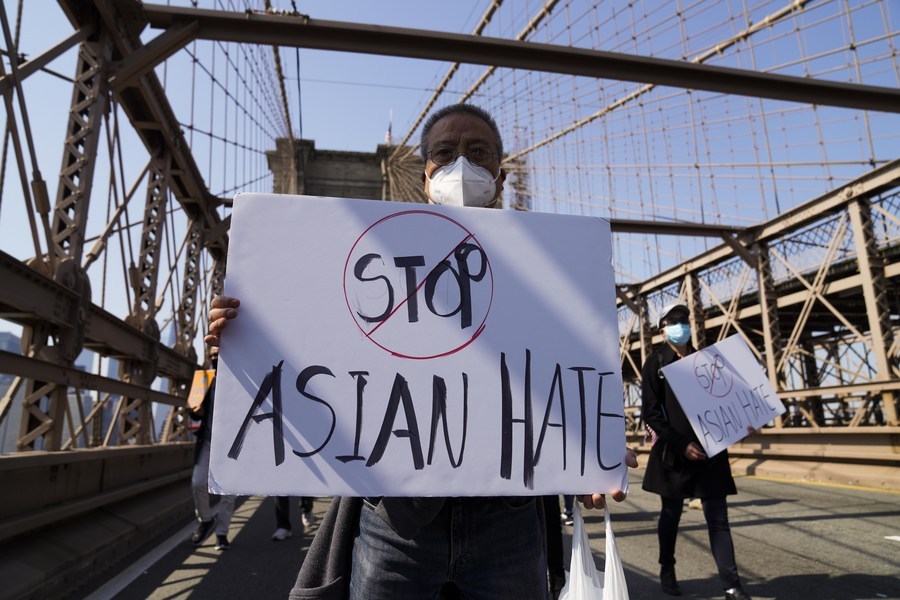 Asian Americans who have experienced racism are more stressed by anti-Asian hate than the pandemic itself and have heightened symptoms of depression, anxiety, stress and physical symptoms, according to a new report.

The Stop AAPI Hate survey was conducted from January to March this year with 413 individuals who reported racist incidents to the platform last year. It found that 71.7 percent of the respondents said anti-Asian discrimination was their greatest source of stress, much higher than other pandemic concerns. The survey also shows that 95.3 percent of them report viewing the US as more dangerous for Asian Americans.

The Asian American Psychological Association, in collaboration with the Stop AAPI Hate, conducted a parallel national needs assessment study of 3,736 Asian Americans as the comparison group from January to April.

The national needs assessment survey found 34.3 percent of the participants cited anti-Asian racism as their greatest source of stress, and 75.2 percent of them viewed the US as more dangerous for Asian Americans, both numbers much lower that what the Stop AAPI Hate survey found.

"It's a really scary statistic," Russel Jeung, co-founder of Stop AAPI Hate told China Daily. "They, overwhelmingly, were more concerned about racism than they were concerned about the pandemic that's killed 600,000 people in the US," he said.

The report also found that one in five Asian Americans who have experienced racism display "racial trauma", the psychological and emotional harm caused by racism.

Experience of racism during COVID-19 is found to be more strongly associated with post-traumatic stress disorder (PTSD) symptoms, according to COVID-19 Adult Resilience Experiences Study, which recruited 1,002 adults in the US aged between 18 years and 30 years from April to June last year.

During the pandemic, one in three Asian and Asian American young adults reported clinically elevated symptoms of depression and general anxiety, and one in four reported a PTSD diagnosis, according to the study's data drawn from 211 participants who self-identified as Asian or Asian American.

The study found the rates are higher than pre-COVID-19 mental health estimates. Prior to the pandemic, Asian Americans, particularly immigrants and those with lower English proficiency, had often had trouble accessing mental health care due to structural, cultural, and linguistic barriers.

"It's collective trauma. We experienced that as a group, not just as an individual. And then when we see it on the news again and again, we are reminded of that trauma," said Jeung.

He also said the racism may leave a lasting impact on young Asian Americans.

"Young people are having the same symptoms as the adults. They're showing signs of trauma, being hyper vigilant and avoidant," Jeung said. "Right now, people are stigmatizing Chinese and Asians. They think of us as disease carriers. So another consequence is they (young Asian Americans) will self-stigmatize, they'll shun their Asian parts too, just like the way others shun them for being Asian."