Republican Youngkin wins gubernatorial election in US state of Virginia

WASHINGTON, Nov. 3 (Xinhua) -- Republican Glenn Youngkin was projected by U.S. media to have won the hotly contested gubernatorial election in the U.S. state of Virginia on Tuesday, beating former Democrat Governor Terry McAuliffe and flipping the state from blue to red. 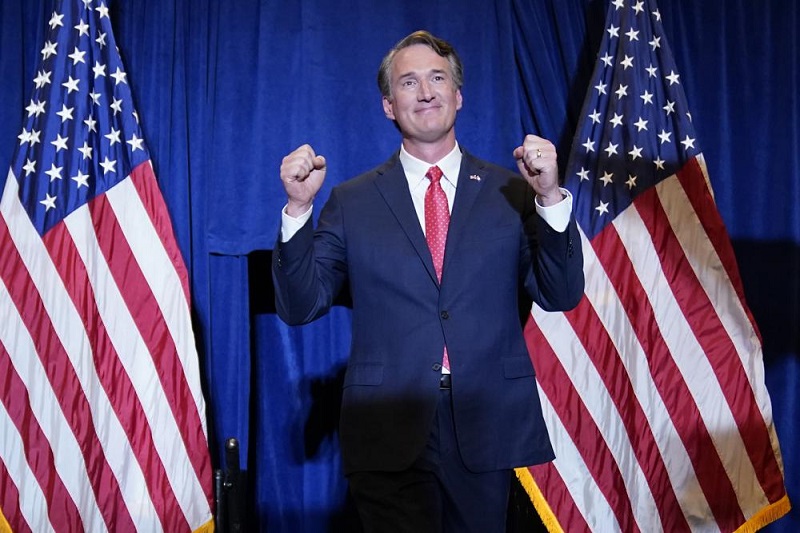 Multiple U.S. media outlets, including the Associated Press, the CNN, NBC News and ABC News, called the election for Youngkin, a former CEO of a private equity firm who has been campaigning for the governorship on such local issues as education, specifically parents' rights over school boards, and tax cuts.

With some 98 percent votes in, the projection from the CNN was that Youngkin got 50.9 percent of the votes, while McAuliffe, governor of Virginia between 2014 and 2018 who's seeking a second nonconsecutive term by tying his opponent to former President Donald Trump -- whom President Joe Biden beat by 10 percentage points in the state in the 2020 presidential election -- trailed with 48.4 percent.

"Alrighty, Virginia. We won this thing," Youngkin told his supporters gathering at his campaign headquarters as he declared the victory.

Pledging "transformation on day one," Youngkin in his remarks singled out education, promising "the largest education budget in the history of the commonwealth" while vowing to "introduce choice within our public school system."

McAuliffe has yet to concede defeat, telling supporters when he made an appearance at one point during the night, "The fight continues."

While McAuliffe's campaigning strategy has proven to have not paid off as expected, the victory of Youngkin -- who has walked a fine line not to relate himself too much to Trump -- may provide some sort of lesson for Republicans heading to the 2022 midterm elections, although extrapolating the national political landscape from a single race seems not so necessary.

Biden, Vice President Kamala Harris and former President Barack Obama all campaigned for McAuliffe during the race, an indication of just how eager Democrats wanted to hold the state ahead of the midterm elections. "It's a close election, and it's a bellwether for what happens in the rest of the country," Harris said Tuesday at a McAuliffe campaign event days before Election Day.

Also on Tuesday, the race for governorship was held in the state of New Jersey, where incumbent Democratic Governor Phil Murphy and his Republican challenger, Jack Ciattarelli, were in a deadlock with some 85 percent of the votes in.

Meanwhile, in Boston, Massachusetts, Michelle Wu of Chinese descent won the mayoral election to not only become the city's first woman and person of color elected to the post, but also break a 199-year streak of white, male city leaders.