Republicans signal no quick moves on guns despite Trump push 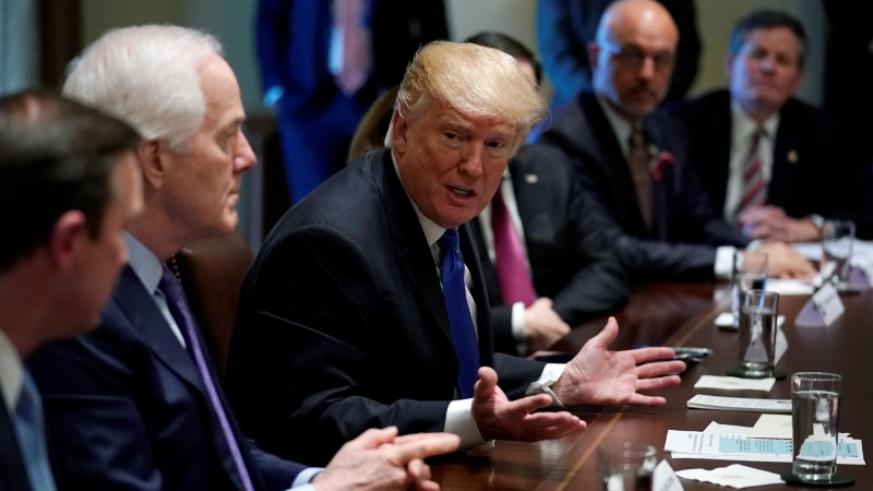 US President Donald Trump meets with bi-partisan members of Congress to discuss school and community safety in the wake of the Florida school shootings at the White House in Washington, US, February 28, 2018. REUTERS/Kevin Lamarque

Republican senators in the US Congress signaled on Thursday that they were hesitant to embrace a call from President Donald Trump for sweeping changes to gun laws, including measures more typically backed by Democrats.

Trump shocked fellow Republicans on Wednesday when he threw his support behind a broad set of restrictions on gun sales in response to the Feb. 14 mass shooting at a high school in Parkland, Florida, that killed 17 people.

But he left the issue in the lap of Congress, and did not say how hard he would twist arms in his party to advance measures that many Americans passionately view as infringing on their constitutional right to own guns.

Senate Republican Leader Mitch McConnell said banking legislation - not guns - would be at the top of the agenda next week, and said the process for gun-related bills was still under discussion.

McConnell said he hoped to eventually see debate on a narrowly tailored bill from John Cornyn of Texas, the No. 2 Senate Republican, that would strengthen a database of people who are not legally allowed to buy guns.

“We’d love to do that at some point. I‘m hoping there’s a way forward,” McConnell said.

Senate Democrats said they want to debate mandates on background checks at gun shows and internet sales, among other measures, but said Trump would need to push his colleagues.

“One public meeting will not close background check loopholes,” said Senate Democratic Leader Chuck Schumer. “The coming days will prove whether the president’s words yesterday were an aberration - I hope not.”

The White House had been expected to release a list of policy measures that Trump backs, but spokeswoman Sarah Sanders on Thursday described the process as an “ongoing discussion.”

“This is going to be an ongoing process and something that we don’t expect to happen overnight, but something that we’re going to continue to be engaged in,” Sanders told reporters, noting Trump plans to meet next week with the video game industry.

Trump has said he is disturbed by the level of violence he has seen in video games and movies accessible to children like his son Barron, age 12.

“So far, there’s been a lot of chopping but I don’t see any chips flying. And I‘m not sure that’s going to change,” Kennedy said, noting Americans “feel passionately” about their constitutional rights on gun ownership.

NARROW BILL SEEN AS MOST PRAGMATIC

Cornyn, who sat beside Trump during his free-flowing, televised meeting on Wednesday, told reporters he believes his modest proposal to improve the background check system for gun buyers was more pragmatic than the more ambitious approach Trump appeared to back.

“I still think it’s the best way forward to get something done and not end up empty-handed,” Cornyn said after meeting with leaders of the Senate Judiciary Committee, Chairman Chuck Grassley and ranking Democratic member Dianne Feinstein.

Cornyn said 50 senators have now signed up to support his bill, which he said could be used as a “base” for debating other measures as amendments. The decision will be up to McConnell.

Trump on Wednesday seemed to back several measures that are opposed by the powerful National Rifle Association gun lobby, which backed his 2016 candidacy.

He voiced support for raising the age for legally buying rifles to 21 from 18, and expressed interest in state laws that allow police to temporarily seize guns from people reported to be dangerous.

NRA spokeswoman Dana Loesch said on Fox News Channel that the group believes the focus should be on making schools more secure, rather than restricting constitutional rights to own guns.

Republican Senator Pat Toomey downplayed some of Trump’s comments, saying he thought the meeting showed Trump wants to get legislation done. “I think there’s an old saying about this president, which is ‘Take him seriously, not necessarily literally,'” Toomey said.

Senator Marco Rubio of Florida said on Thursday that he backed restraining orders for guns owned by people deemed to be dangerous, as well as funding for measures to train schools to identify warning signs for violence.

But Rubio - who has been under pressure from student activists - backed away from a proposal to change age limits for guns, saying the issue did not have enough support in Congress to pass.