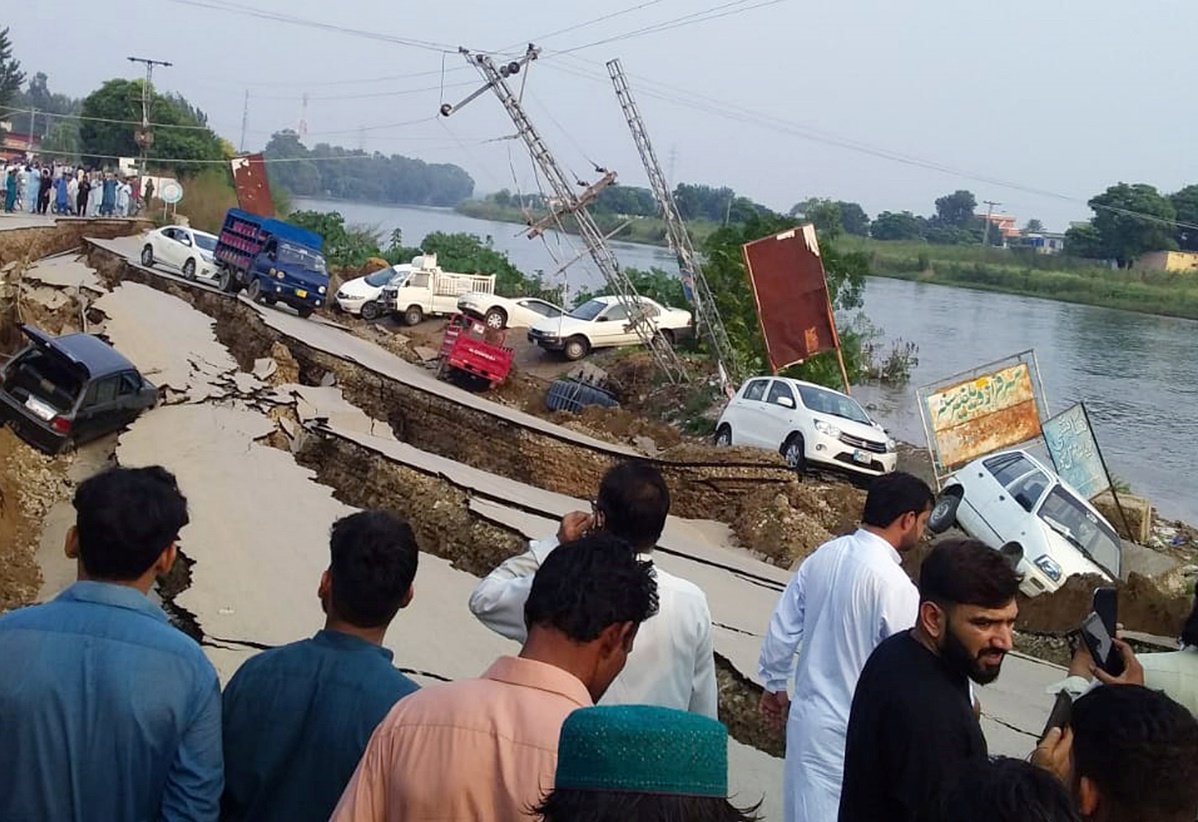 People gather near a damaged road after an earthquake of magnitude 5.8 in Mirpur, Pakistan-controlled Kashmir. (Photo: REUTERS)

Schools were shuttered near the quake-hit city of Mirpur in Pakistan-controlled Kashmir where poor areas were reduced to rubble and the towering brick fences surrounding expensive homes had crumbled.

Residents combed through the wreckage and assessed the damage inflicted on their homes. Large cracks defaced the walls of many houses still standing.

"I lost my house. I lost everything," said Abdullah Khan, whose three-bedroom home in the village of Jatlan on the outskirts of Mirpur was flattened by the magnitude 5.8 quake.

The Pakistan military led search-and-rescue operations as day broke with fears growing that the death toll may jump again.

According to a statement from Pakistani Interior Ministry, 26 people were killed and 456 others injured in Mirpur, bordering Pakistan's eastern Punjab Province.

At least two women were killed and 20 others wounded in two different incidents of wall-collapsing in the eastern districts of Jhelum and Lahore, officials said.

Mirpur, a city known for its palatial houses, has 450,000 residents.

Rescue operations continued through the night in the area as local hospitals swelled with many patients suffering from multiple fractures.

"I was going to see a friend when the entire area shook with a bang and a huge wall crumbled over me. When I regained my senses I found myself here in this bed," Ali Badshah, a fifth-grade student, said from a hospital in Mirpur where he was being treated for a broken leg.

Near Mirpur, roads were completely destroyed and vehicles overturned by the tremors while bridges, mobile phone towers, and electricity poles were also badly damaged in the melee.

Chinese Foreign Ministry spokesman Geng Shuang said on Wednesday that China is willing to provide assistance on the basis of Pakistan's need.

The quake sent people in Lahore and Islamabad running into the streets, while tremors were also felt as far as New Delhi.

The Press Trust of India reported that panicking people rushed out of their homes and offices in several places, including in Rajasthan, Punjab, and Haryana states.

Pakistan straddles part of the boundary where the Indian and Eurasian tectonic plates meet, making the country susceptible to earthquakes. The country was also hit by a 7.6 magnitude quake on Oct 8, 2005, that killed more than 73,000 people and left about 3.5 million homeless.