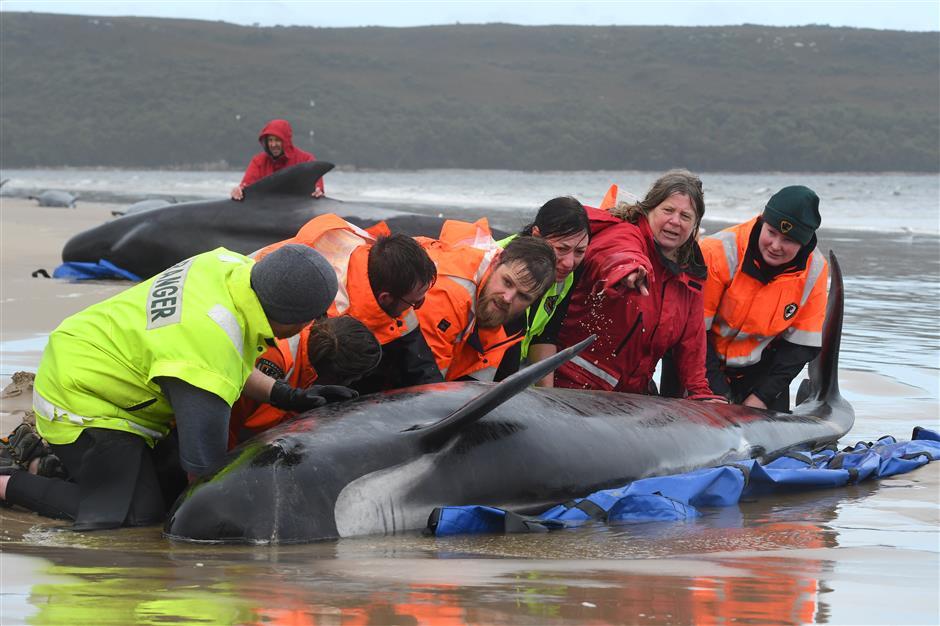 Rescuers strive to save a pod of whales marooned on a beach in Macquarie Harbour on the rugged west coast of Tasmania, Australia on Tuesday. (Photo: CGTN)

Rescuers set free around 25 whales on Tuesday that were marooned on a sandbar off the remote west coast of Tasmania in one of Australia’s worst beaching events, and hope to save more in coming days.

Government scientists said about 90 of the 270 stranded  whales have died since they were spotted from the air in shallow water off the rugged coastline on Monday.

Footage showed large numbers of the animals prone on a wide sandbar at Macquarie Harbour, about 200 kilometers northwest of the state capital Hobart, while others floundered in slightly deeper water.

Rescuers had to get in the icy water to attach the whales — a species of oceanic dolphin that grow to 7 meters long and can weigh up to 3 tons — to slings and then guide the animals as boats dragged them out to deeper water.

“We settled on a method where we get a sling placed under the whale, that’s attached to a boat (and) we also have crew in the water,” said Nic Deka, a regional manager of Tasmania’s Parks and Wildlife Service.

More than 60 people are involved in the rescue effort, including local fishermen and volunteers. They wore wetsuits and were working in shifts to prevent hypothermia.

Scientists do not know why whales, which travel together in pods, sometimes beach themselves but they are known to follow a leader, as well as gather around an injured or distressed whale.

“We’re dealing with large, distressed animals, for several days at a time, and it does take an emotional toll sometimes,” said Kris Carlyon, a biologist with the state government.