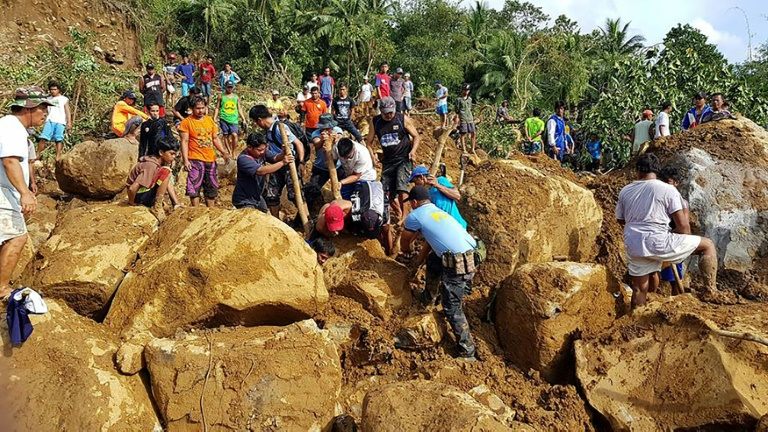 The island province of Biliran suffered the brunt of the storm as the heavy rains caused landslides that buried many homes and destroyed roads and bridges Photo: AFP

Rescuers used bulldozers to dig through mountains of mud in the search for more than 40 people missing in the eastern Philippines after landslides triggered by a powerful storm which killed at least 31 at the weekend, authorities said Monday.

Tropical Storm Kai-Tak was heading out to the South China Sea Monday afternoon after dragging its way across the archipelagic nation over the weekend, leaving at least 31 people dead, most of them from drowning and landslides, government officials said.

The island province of Biliran suffered the brunt of the storm as the heavy rains caused landslides that buried many homes and destroyed roads and bridges.

Rescuers searching for survivors on the island were not optimistic.

"There is an assumption that the missing are already dead," Sofronio Dacillo, a provincial disaster risk reduction and management officer, told AFP.

The largely agricultural island of Biliran, with a population of more than 140,000 also had its power system knocked out and its electricity supply was not expected to be restored until Wednesday, said Dacillo.

"It was like two months of rain fell on one day in Biliran. And because of this, the soil really softened and that is also why so many bridges were destroyed," said Roque.

Officials also said more than 270,000 people were affected by the storm, with 191,000 in evacuation centres.

Duterte visited the island on Sunday to offer his condolences and to direct authorities to speed up their efforts to recover the missing and to repair vital bridges to ensure the delivery of food and fuel supplies, Roque said.

Kai-Tak's winds were not very powerful, but its slow movement across the central islands unleashed heavy rains over a long period, flooding large areas.

Many of the islands hit by Kai-Tak also bore the brunt of Super Typhoon Haiyan in 2013, which left more than 7,350 people dead or missing.

In a video message posted on Facebook, the island province's governor Gerardo Espina said communities were running out of fuel and water as the storm had knocked out many vital bridges, preventing delivery of supplies.

"Of all the storms that passed Biliran ... this is the one that we can call the worst," he said.

As of Monday afternoon, Kai-Tak had weakened with its gusts slowing to 60 kilometres (37 miles) per hour, moving west at 18 kilometres per hour, the government weather station said.

The nation is battered by about 20 major storms each year.