Authorities were using boats and large vehicles on Saturday to rescue and evacuate residents in parts of the Midwest where a recent deluge of rainwater and snowmelt was sent pouring over frozen ground, overwhelming creeks and rivers, and killing at least one person. 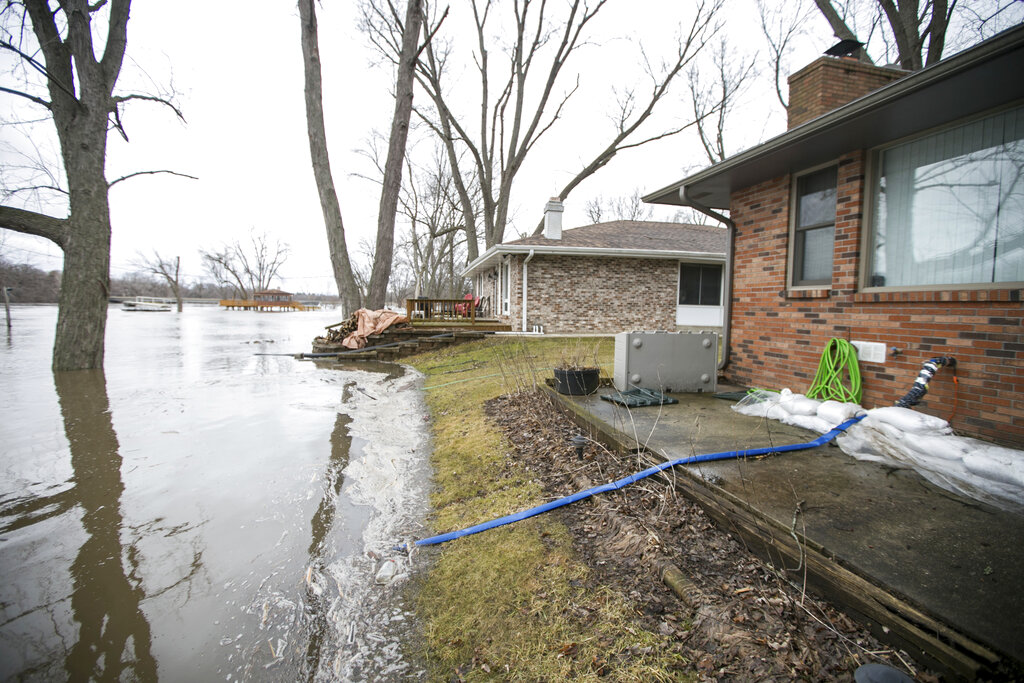 Water pumps are used to clear a home during flooding on Friday, March 15, 2019, in Freeport, Ill. (Photos: AP)

The scramble to move people out of harm's way was expected to subside going into the new week, as rivers and creeks in flooded eastern Nebraska and western Iowa were expected to crest Saturday and Sunday. That left officials downstream looking to prepare for likely flooding.

The National Weather Service said the Missouri River at St. Joseph reached nearly 26 feet on Saturday, about a foot below what's considered major flooding at the northwest Missouri city. But it's expected to crest Wednesday or Thursday at 29.3 feet — more than two feet above major flooding level.

Evacuation efforts in eastern Nebraska and some spots in western Iowa on Saturday were hampered by reports of levee breaches and washouts of bridges and roads, including part of Nebraska Highway 92, leading in and out of southwest Omaha. Authorities confirmed that a bridge on that highway that crosses the Elkhorn River had been washed out Saturday. In Fremont, west of Omaha, the Dodge County Sheriff's Office issued a mandatory evacuation for some residents after floodwaters broke through a levee along the Platte River. And in Mills County, Iowa, authorities ordered people in some rural areas to evacuate after the Missouri River overtopped levees. 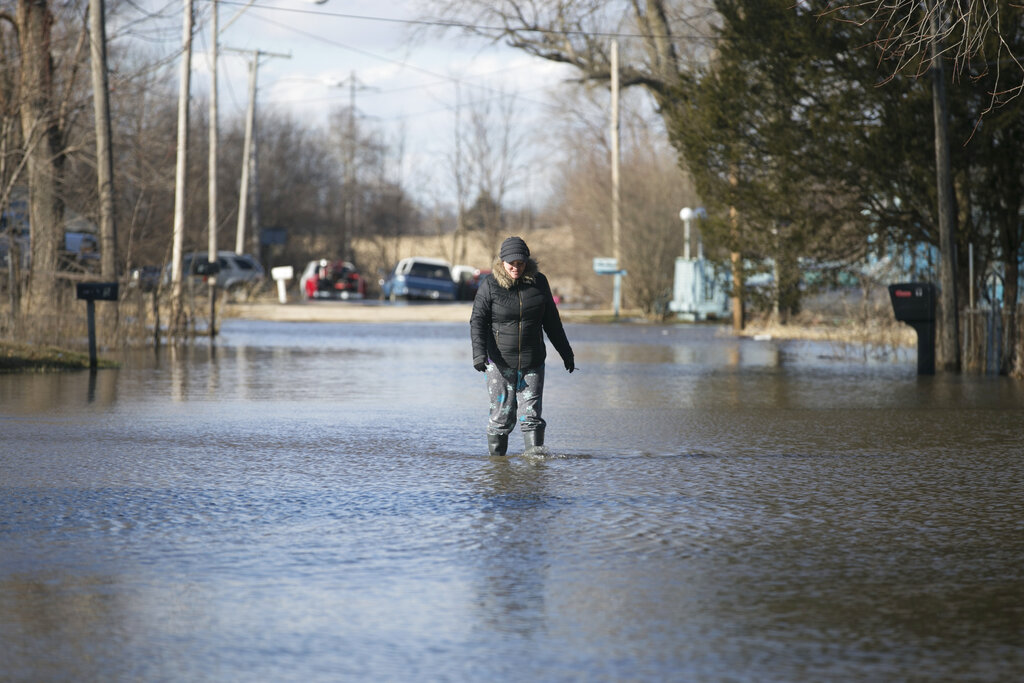 Allyson Hartman walks down flooded Louis Lane from her home on Friday, March 15, 2019, in Freeport, Ill.

The flooding followed days of snow and rain — record-setting, in some places — that swept through the West and Midwest. The deluge pushed some waterways, including the Missouri River, to record levels in Nebraska, South Dakota, Iowa and Minnesota. The flooding was the worst in nearly a decade in places.

The family of farmer James Wilke, 50, of Columbus, Nebraska, said he was killed Thursday when a bridge collapsed as he was using his tractor to try to reach stranded motorists on Thursday. His body was found downstream, his cousin Paul Wilke told the Columbus Telegram. Gass Haney Funeral Home confirmed James Wilke's death.

At least two other people were missing in floodwaters in Nebraska. Officials said a Norfolk man was seen on top of his flooded car late Thursday before being swept away in the water and another man was swept away by waters when a dam collapsed on the Niobrara River.

Officials in Sarpy County, south of Omaha, said Saturday that power may be shut off to communities along the Missouri, Platte and Elkhorn rivers for safety reasons. They warned those who choose to ignore calls to evacuate that rescues would be attempted only during daylight hours. Some cities and towns, such as North Bend on the banks of the Platte River, were submerged. Others, such as Waterloo and Fremont, were surrounded by floodwaters, stranding residents in virtual islands with no access in or out.

"There is no way out of here unless you've got a helicopter — or a boat," the Rev. Mike Bitter, pastor of Christian Church of Waterloo, told the Omaha World-Herald.

Officials in western Iowa and eastern Nebraska were urging people not to drive unless necessary. In Iowa, a section of northbound Interstate 29 that runs parallel to the Missouri River was closed due to flooding. Authorities were rerouting motorists at Kansas City, Missouri, using a detour that took people almost 140 miles (225 kilometers) out of the way. 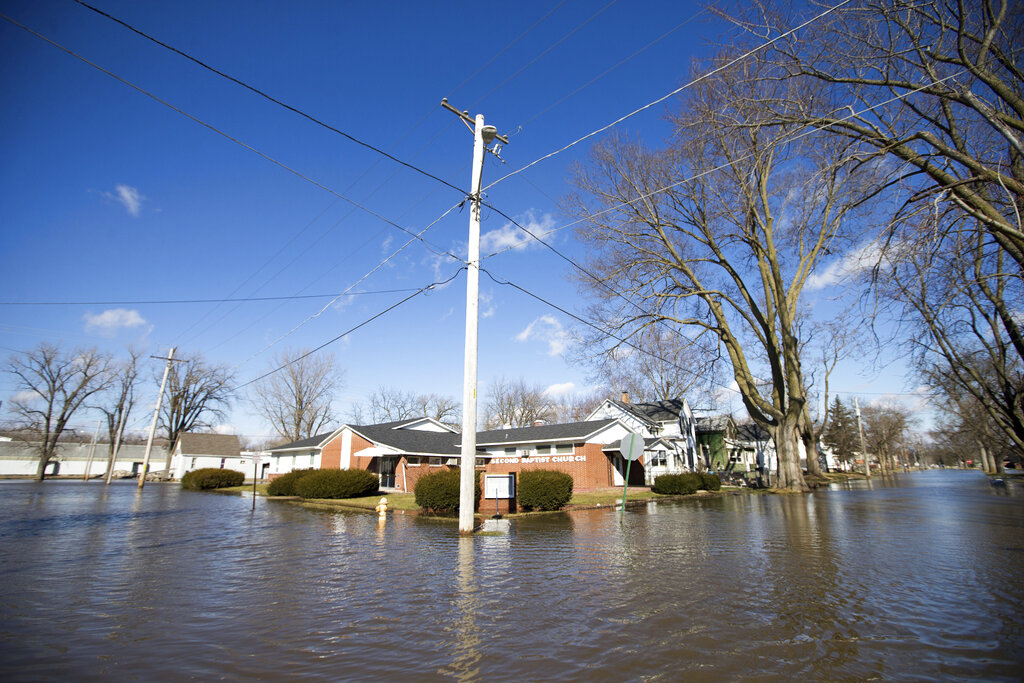 Farther east, the Mississippi River saw moderate flooding in Illinois from Rock Island south to Gladstone. Meteorologist Brian Pierce with the National Weather Service's Quad Cities office in Davenport, Iowa, said flooding on the Mississippi could get worse a few weeks as more snow melts in Minnesota and Wisconsin.

"What we're having now is the dress rehearsal for the main event that's going to happen in early April," he said of the flooding on the Mississippi.

Rising waters along the Pecatonica and Rock rivers flooded some homes in the northern Illinois cities of Freeport, Rockford and Machesney Park. The National Weather Service said record crests were possible along the rivers, with water levels forecast to continue to rise over the next several days and remain above flood stage through most of the weekend.

Freeport resident Mary Martin told the (Freeport) Journal-Standard that she went to the store to get milk and bread when she saw floodwaters were rising Friday.

"Within an hour of going to the store, I could not get back in. That's how fast the water was coming up," Martin said.

Cover image: James Snider drives a mini front-end loader to carry sand while building a berm with friends around his Ventura Boulevard home on Friday, March 15, 2019, in Freeport, Ill.