FUKUSHIMA, Japan, Feb. 15 (Xinhua) -- On Sunday morning, a few hours after a 7.3-magnitude earthquake struck off Japan's northeastern Fukushima Prefecture, far fewer cars were seen on the expressways, while some sections of the Joban Expressway were closed due to landslides. 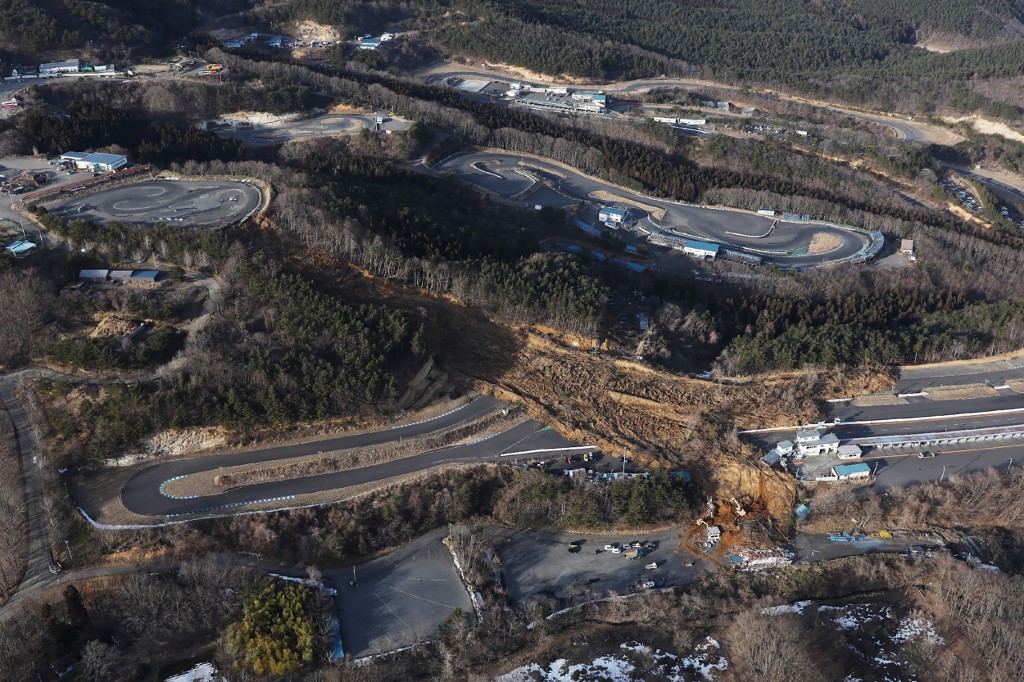 This aerial picture taken from a Jiji Press chartered aircraft shows the landslide site of a circuit field in Nihonmatsu, Fukushima prefecture on February 14, 2021 after a 7.3-magnitude earthquake struck off Japan's east coast late on February 13.

The strong quake, which hit late Saturday near the eastern coast of the Honshu island, was measured Upper 6 in Soma city in Fukushima in seismic intensity on the Japanese scale which peaks at 7.

More than 150 people were reported injured in the quake as of Sunday. Apart from Fukushima and Miyagi prefectures, injuries were also reported in six other prefectures, including Chiba, Kanagawa and Saitama, all neighboring the capital Tokyo.

In Tokyo, around 300 km from the epicenter, the building where Xinhua reporters live shook for a long time and the furniture creaked.

On Sunday morning, some shops and metro stations were closed in Soma, where the earthquake was strongly felt. Other than that, not much visible damage was seen in the downtown area, with the city mainly operating in an orderly manner.

In downtown Soma, the facade of the walls of a house was seen peeled off and the wooden frame exposed, with the traffic department putting up roadblocks around it.

A local female resident who owns a restaurant said she still felt scared when recalling her experience of Saturday's quake.

"All of a sudden the building started to shake. The things in the room clattered off the shelves, and the electricity became intermittent. It was terrible. Worried about aftershocks, I spent a nervous night in my car," she told Xinhua.

The next day, she found a cracked exterior wall, a broken second-floor window and a cracked staircase in the rented house.

On the way from Soma to Koori-machi, a town in Fukushima, an old house was seen on the verge of collapse, and nearby roads have been closed. A number of vacant houses in the area were badly damaged, including one where the tiles had fallen to the ground and bikes in a nearby shed lay in a mess.

According to the Japan Meteorological Agency, the latest quake was an aftershock of the devastating 2011 quake that killed more than 15,000 people and sparked the Fukushima nuclear meltdown.