WORLD Resistance to vaccine mandate mounts in US

Resistance to vaccine mandate mounts in US 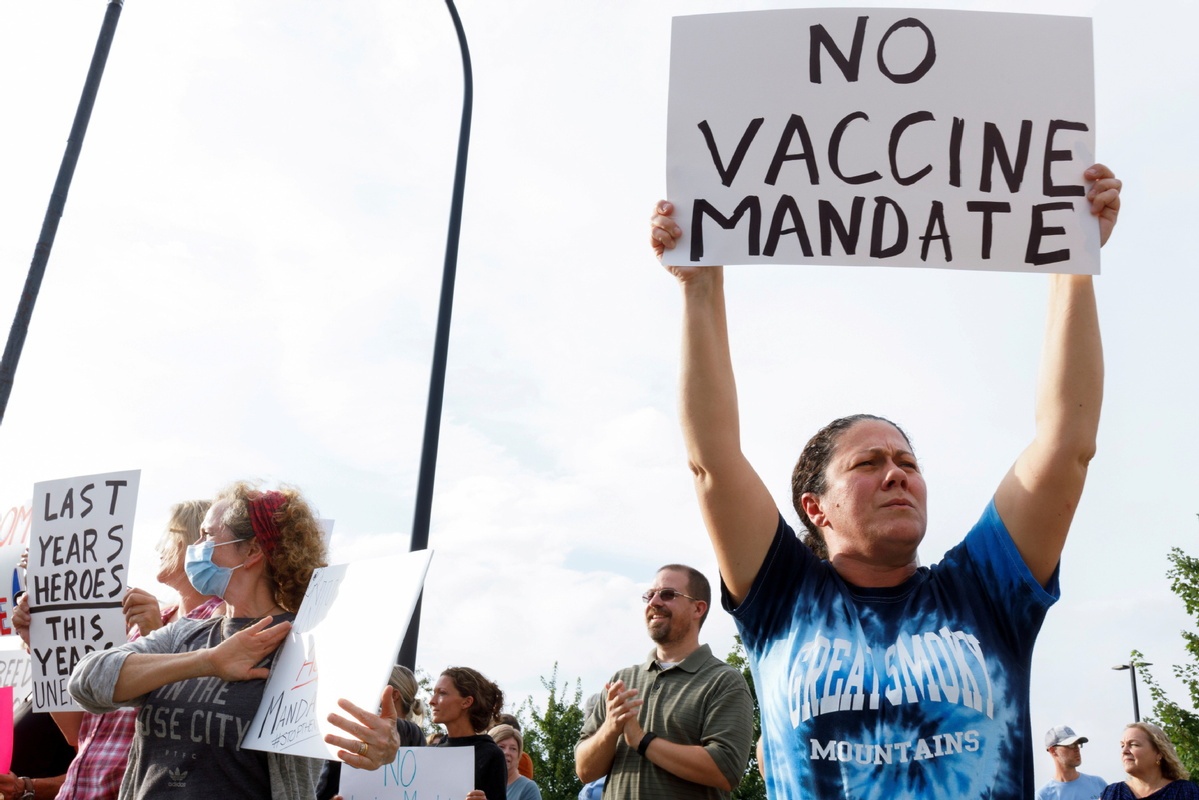 US President Joe Biden's sweeping vaccine mandate is running into ever more resistance from Republicans and other critics, including those who say the more aggressive approach from the White House could harden attitudes against COVID-19 vaccinations.

Asa Hutchinson, the Republican governor of Arkansas, said on NBC's Meet the Press on Sunday that the president's order to make the vaccinations or weekly negative tests compulsory for businesses with more than 100 employees was "an unprecedented assumption of federal mandate authority".

Other Republican governors, including Ron DeSantis of Florida and Greg Abbott of Texas, have threatened to sue the federal government, arguing that the Democratic president was acting outside the US Constitution when he imposed the mandate.

On Thursday, Biden announced a policy that mandates vaccinations for federal employees, with no option for regular testing, in addition to the same requirement for businesses with at least 100 workers. Staff at healthcare facilities that get government funding also have to be fully vaccinated.

Perhaps a key reason for the stiffening resistance to the mandates－aside from their impact on about 100 million more US citizens－is the hectoring tone that Biden took in an address in which he said he would get obstructionist state governors "out of the way".

"If those governors won't help us beat the pandemic, I'll use my power as president to get them out of the way," he said.

Biden's defiant stance came amid declining approval ratings, mostly driven by the chaotic withdrawal and wind-down of the 20-year US military presence in Afghanistan, capped by the deaths of 13 US service members in a suicide bombing at Kabul's airport on Aug 26.

As of Sunday, there were nearly 41 million coronavirus cases in the US since March 2020, when the pandemic began in earnest, according to the Johns Hopkins Coronavirus Resource Center. The number of COVID-19 deaths is approaching 660,000. The country's infections and fatalities are the highest in the world and have risen over the past few months, with the contagious Delta variant cited as the main reason.

The rising numbers have heightened concerns about the safety of schools.

New York City's public schools, with about 1.1 million students, were returning to providing full-time in-person learning on Monday after the pandemic forced children to learn remotely.

All systems are go for a safe reopening, according to Mayor Bill de Blasio. "This is going to be one of those game-changer days, one of these days that we'll remember when we turn the corner on COVID," he said last week.

The return to school comes as the Delta variant accounts for 98 percent of positive COVID-19 samples tested in New York, according to the city.

New York Governor Kathy Hochul has directed the state's Health Department to institute a universal mask requirement in all schools.

But District Council 37, the city's largest public-employee union, with 125,000 members and 50,000 retirees, filed an unfair labor practices complaint on Aug 23 against the city over the mandate.