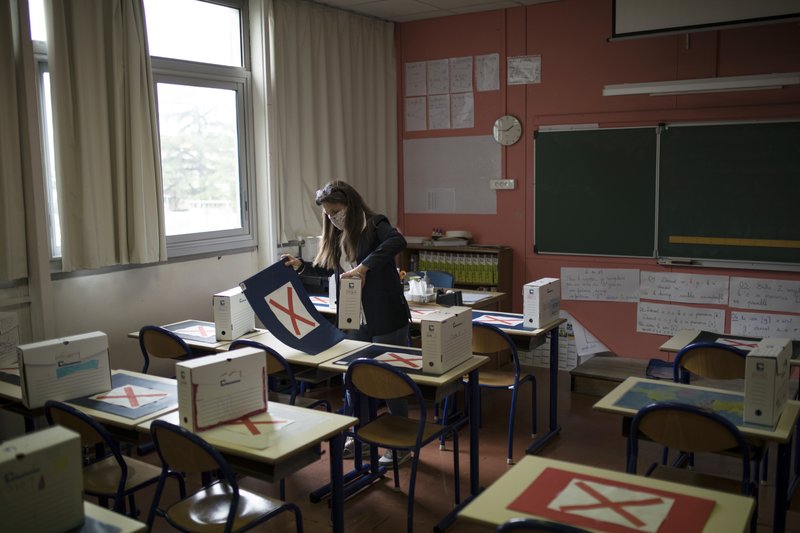 Saint-Tronc Castelroc primary school director Sylvie Duquesnoy prepares a classroom to receive students on a voluntary basis in Marseille, southern France, Monday, May 11, 2020. France is beginning to reopen Monday after two months of virus confinement measures. Shops, hair salons and some other businesses are reopening Monday and French citizens no longer need a special permission form to leave the house. (Photo: AP)

Plastic spacing barriers and millions of masks appeared on the streets of Europe’s newly reopened cities Monday, as France and Belgium emerged from lockdowns, the Netherlands sent children back to school and Spain let people eat outdoors.

All faced the delicate balance of trying to restart battered economies without causing a second wave of coronavirus infections.

Fears of infection spikes in countries that eased their restrictions have been borne out over the past few days in Germany, where new clusters were linked to three slaughterhouses; in Wuhan, the Chinese city where the virus started; and in South Korea, where one nightclub customer was linked to 85 new cases.

Health officials in the U.S. will be watching closely in the coming days for any resurgence of the virus two weeks after states began gradually reopening.

Authorities have warned that the scourge could come back with a vengeance without widespread testing and tracing of infected people’s contacts, and efforts to assemble contact-tracing teams are underway in Europe and the U.S.

While some countries such as Germany have established robust tracing abilities, other countries are far behind. Britain abandoned an initial effort in mid-March when the virus’s rapid spread made it impossible. Now it is recruiting 18,000 people to do the legwork of tracking contacts.

Britain and other countries are also developing contact-tracing cellphone apps that can show whether someone has crossed paths with an infected person.

In the hardest-hit corner of the U.S., contact tracers in New York began online training Monday. A May 15 goal for reopening parts of the state hinges on the ability to track the spread of the virus.

Gov. Andrew Cuomo set a requirement of 30 contact tracers per 100,000 residents for areas to reopen. That translates to about 6,000 workers statewide performing what he described as a daunting task. Cuomo said contact tracing is “a logistical nightmare, never been done before.”

Contract tracing across the rest of the U.S. is a patchwork of approaches and readiness levels.

In loosening up the country’s lockdown, German authorities have spelled out a specific level of infection that could lead to the reimposition of restrictions in local areas. Other countries — and U.S. states — have been vague about what would be enough to trigger another clampdown.

With Monday’s partial reopening in France, c rowds formed at some Paris metro stations, but the city’s notorious traffic jams were absent. Only half the stores on the Champs-Elysees were open.

Parisian hairdressers planned to charge a fee for the disposable protective gear they will have to give customers. Walk-ins will be a thing of the past, said Brigitte L’Hoste, manager of the Hair de Beauté salon.

“The face of beauty will change, meaning clients won’t come here to relax. Clients will come because they need to,” said Aurelie Bollini, a beautician at the salon. “They will come and aim at getting the maximum done in the shortest time possible.”

Across the Atlantic, hair salons in Florida contended with tight regulations and pent-up demand as they reopened across much of the state, save for some hard-hit areas. The Fringe Salon in Naples was already booked for the entire week, its capacity limited by the social-distancing rules.

“It’s just pure chaos. Everybody’s excited about getting their haircut,” said owner Trish Boettcher. “People are just randomly calling who are not our regular clients.”

In South Korea, the government clamped down again, halting school reopenings planned for this week and reimposing restrictions on nightclubs and bars. It is trying to track down 5,500 patrons of a Seoul nightlife district through credit-card transactions, cellphone records and security footage.

In China, Shanghai Disneyland reopened but with limited visitors who had to wear face masks and have their temperatures checked.

Roughly half of Spain’s 47 million people shifted into looser restrictions, beginning to socialize, shop in small stores and sit outdoors at restaurants. Its biggest cities, Madrid and Barcelona, remained under lockdown.

Spanish hotels reopened with precautions — but also financial bleak prospects — because people aren’t allowed to travel outside their provinces and few flights from overseas.

British Prime Minister Boris Johnson announced a modest easing of the country’s lockdown but urged citizens not to squander the progress made. Some people, however, were confused as the government shifted its slogan from “Stay at Home” to “Stay Alert.” Scotland, Wales and Northern Ireland stuck with the old motto.

At the risk of more confusion, the British government did an about-face on masks Monday, telling people to cover their mouth and nose in stores and on buses and subways.

People in jobs that cannot be done at home “should be actively encouraged to go to work” this week, Johnson said. He also set a goal of June 1 to begin reopening schools and shops if Britain can control new infections. Johnson himself is the only world leader to suffer a serious bout of COVID-19.

At London’s Waterloo train station, not everyone was convinced.

“I am nervous about going back, because I have a family and they have been isolating since the start. I feel like I am now putting them at risk,” said Peter Osu, 45, who was returning to work at a construction site.

In the U.S., Trump administration officials spoke optimistically about a relatively quick economic rebound from the pandemic — but then announced that Vice President Mike Pence is “self-isolating” after an aide tested positive.

The U.S. has seen 1.3 million confirmed infections and about 80,000 deaths, the most in the world by far, according to a tally by Johns Hopkins University. Worldwide, 4 million people have been reported infected and more than 280,000 have died, over 150,000 of them in Europe. Health experts believe all those numbers understate the true toll of the outbreak.

Dr. Christopher Murray, director of the University of Washington institute that has created a widely cited model projecting the course of the outbreak, said state reopening efforts will result in more cases and deaths, noting they are going up more than expected in Illinois, Arizona, Florida and California.

India reported its biggest daily increase in cases Monday even as it prepared to resume train service.

In South Africa, authorities in Cape Town and the surrounding province considered reimposing restrictions because the area has become a hotspot accounting for about half the country’s 200 virus deaths.