WORLD Restaurants and racing can resume, but new rules abound

Restaurants and racing can resume, but new rules abound 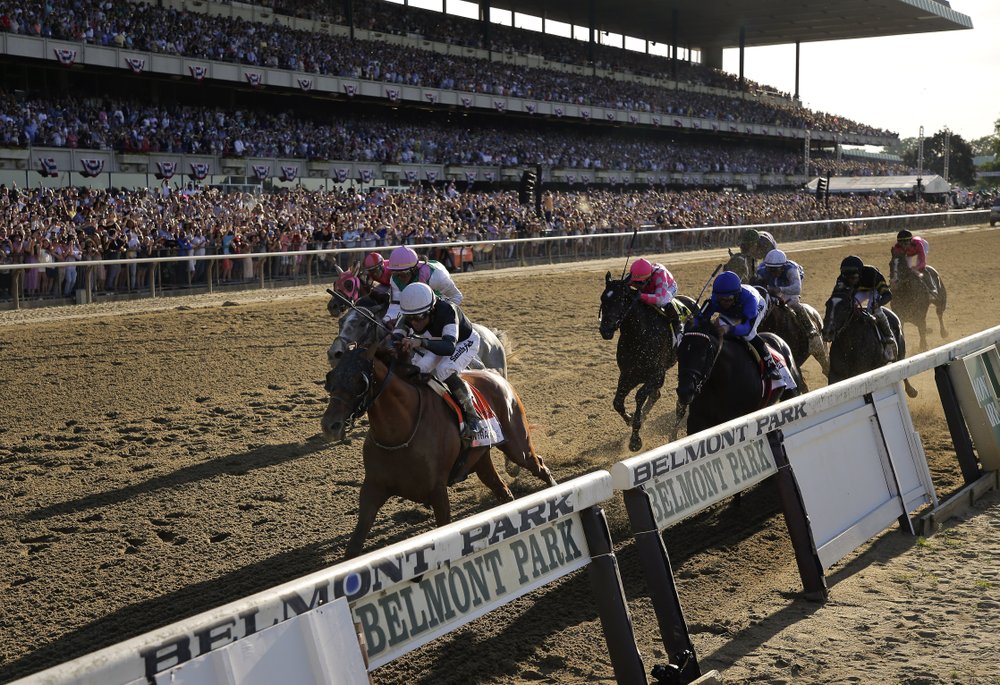 In this June 8, 2019, file photo, Sir Winston (7), with jockey Joel Rosario up, crosses the finish line to win the 151st running of the Belmont Stakes horse race in Elmont, N.Y. New York will allow horse racing tracks and Watkins Glen International car track to reopen with the easing of the coronavirus outbreak. But Gov. Andrew Cuomo on Saturday, May 16, 2020, was quick to add a caveat: “No crowds. No fans."(Photo: AP)

Restaurants can reopen in New Orleans, a city famous for its cuisine, but they must take reservations and limit the number of diners. Auto and horse racing tracks in New York can resume competitions but without spectators.

Officials cautiously eased more restrictions Saturday on eateries, shops and outdoor venues as they tried to restart economies without triggering a surge in new coronavirus infections. But the reopenings came with new rules designed to curb the spread of the disease — another indication that the familiar ways of dining out or watching sporting events are gone for now.

Public health experts warn that the pandemic, which has killed more than 88,000 people in the US and 300,000 worldwide, could pick up again if precautions are not taken or officials move too quickly to get people back to work.

New York Gov. Andrew Cuomo said horse racing tracks and the Watkins Glen International auto track can reopen with “no crowds, no fans.” He also said he could envision a return of Major League Baseball in New York, the epicenter of the US outbreak, also without fans.

“If it works economically, that would be great,” he said.

The governor has allowed large parts of upstate New York to start reopening by allowing certain businesses such as construction to operate under safety guidelines. But most residents — particularly in hard-hit areas closer to New York City — remain under tight restrictions as communities try to reduce infection rates and amass enough testing and tracing to reopen in coming weeks or months.

Cuomo also announced that residents of suburban Westchester and Suffolk counties, two of the nation’s early hot spots, will again be eligible for elective surgeries and ambulatory care. New York’s ban on all non-essential gatherings is still in effect.

New Orleans took its first steps to loosen restrictions that have been in place for two months, one day after the rest of Louisiana did the same.

The city is restricting buildings to 25% of capacity, like the rest of the state, but also requires restaurants, nail salons and other businesses to take customers by reservation. The city has capped the number of people allowed in houses of worship and movie theaters at fewer than 100.

Some restaurateurs decided to try reopening. Others planned to stick to takeout or stay closed all together.

Kirk Estopinal, one of the owners of Cane & Table in the French Quarter, planned to open Saturday. Guests are supposed to order their food when they make a reservation online and are asked to wear masks. Cleaning will be stepped up, and bathrooms cleaned after every use.

“We’re going to trial run what it is to operate in the new normal,” he said. “We’re looking at a restaurant experience that is almost touch-less for our guests.”

Jennifer Weishaupt, chief executive of the Ruby Slipper Cafe, said the company reopened in New Orleans, Metairie and Baton Rouge. Business was not as busy as anticipated, possibly because of bad weather.

“We had some folks standing in line before we opened at 8 a.m., which was really great,” Weishaupt said.

“We’re cautiously optimistic,” she added. “We’ve had a steady stream of customers, and we’ve seen a lot of regulars and it’s been nice to reconnect with them.”

Similar steps took place around the world as infections declined in many cities and countries.

Australians went out to eat for the first time in weeks Saturday, but the reopening of restaurants, pubs and cafes came with a warning: Don’t overdo it.

“The message is, yes, appreciate all the efforts, appreciate the opportunity to release some of those measures, but let’s not have a party, let’s not go to town,” said Tony Bartone, president of the Australian Medical Association.

Most restaurants are limited to 10 customers at a time, and Bartone said people must maintain social distance, follow coughing etiquette, wash their hands regularly and stay away from others if they are ill.

In New Zealand, even Prime Minister Jacinda Ardern and her fiance, Clarke Gayford, were initially turned away for brunch by a restaurant in the capital city, Wellington, because it was too full under coronavirus guidelines.

There was a happy ending: A spot freed up, and staff chased down the street to call the couple back.

Italy’s tourism industry is focused firmly on June 3, when both regional and international borders reopen, allowing the first prospect of tourists since Europe’s first lockdown went into place in early March. In tourist-reliant Venice, occupancy of the city’s 50,000 hotel beds has hovered around zero ever since.

“Venice lives on tourism, period,” said Claudio Scarpa, head of the city’s hotel association. ’’All the economic structures that operate in the city, including the port, are tied to tourism.”

France was also cautious, calling for a coordinated European effort on opening. At the same time, French officials could make decisions “that protect the French” regarding countries “where the virus is still active,” Interior Minister Christophe Castaner said Saturday.

As hundreds of French beaches reopened, Castaner warned that the government would not hesitate to close them again if rules are not respected, including a ban on sunbathing.

Local authorities were charged with deciding which beaches would reopen as part of a staggered plan to end a strict two-month lockdown that began March 17. Under the rules, beachgoers can take a dip but cannot lay in the sun or picnic in the sand. Social distancing rules must be maintained, and groups must be limited to 10 people.

“The virus is still there,” Castaner said. “It moves around with our movements.”

“After a long period at home, we will all want to go out and have a good coffee in a bar, eat a pizza in a pizzeria, buy a pair of jeans, or go to the hairdressers,” Milan Mayor Giuseppe Sala said Saturday in a Facebook video.

Many restaurant owners complained that the new rules for reopening were unclear and that the entire sector — including suppliers and food producers — was suffering. Dozens protested outside Milan’s main train station and called for an abolition of taxes and more help.

In Britain, officials and tourism boards discouraged people from visiting popular tourist spots — like beaches or country parks — on the first weekend since lockdown rules were eased in England. Stricter rules remain place in other parts of the UK, and English daytrippers have been warned against crossing into Scotland or Wales.

Spain’s prime minister, Pedro Sánchez, said he would ask Parliament for what he hopes will be the last extension of the country’s state of emergency to battle the coronavirus pandemic, until around late June.

The country is slowly scaling back confinement measures, but the tourism industry, which accounts for 12% of GDP, looks set to lose its critical summer season.