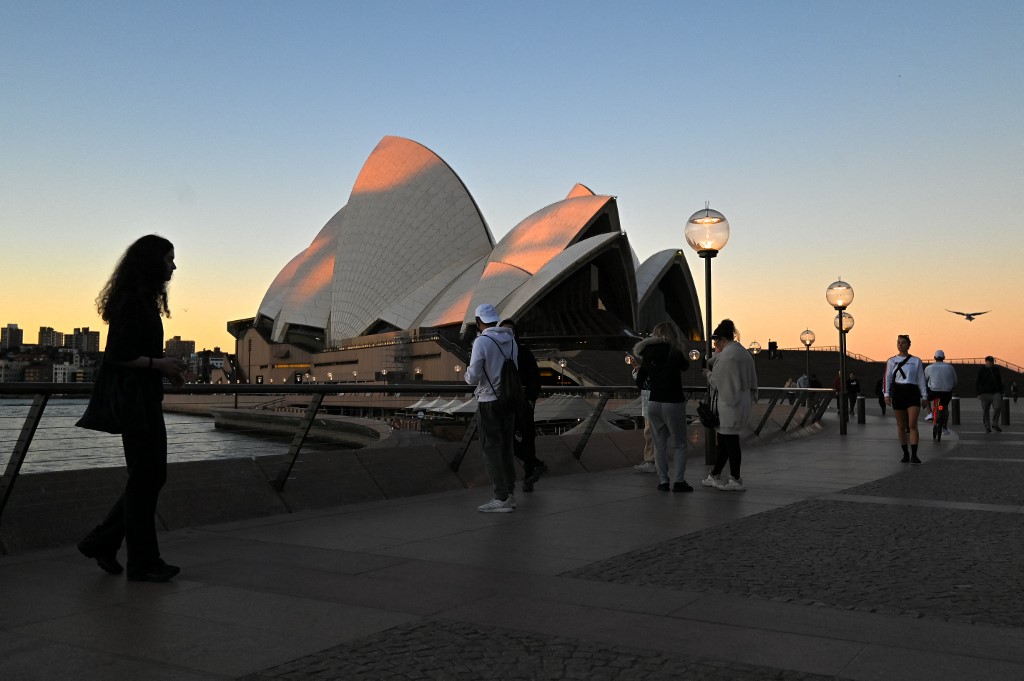 A small number of people stand in front of the Sydney Opera House in Circular Quay, usually full of visitors at the weekend, in central Sydney on June 27, 2021, on the first full day of a two-week coronavirus lockdown to contain an outbreak of the highly contagious Delta variant. (Photo: AFP)

NSW recorded 30 new locally acquired cases of COVID-19 in the 24 hours to 8 p.m. local time on Saturday, all of which were linked to the Bondi cluster in east Sydney.

The total number of local cases in the state's latest outbreak reached 112 since June 16 when the index case for the Bondi cluster, a driver who transported international flight crew, was reported. The driver was confirmed to be infected with the Delta variant.

Among the 112 cases, 110 were linked to this cluster and two remained under investigation.

The closest locations with reported COVID-19 cases exceeded 200 and some public transport routes were listed as exposed.

Health authorities were concerned with five Virgin flights between cities in the countries' east coast that were associated with confirmed cases.

NSW Health issued a public health alert on Saturday night regarding the five flights, as a Sydney-based cabin crew member who worked on the flights was tested positive.

"NSW Health is working with its counterparts in Victoria and Queensland and Virgin Australia to reach all passengers on affected flights on Friday and Saturday," NSW Health said in a statement.

Victorian health authorities have identified 128 passengers potentially exposed to COVID-19 on one of the Virgin flights and contact tracing is under way.

At the same time, restrictions came back to several Australian states and territories as locally acquired cases recorded.

The state of Western Australia (WA) announced to impose new restrictions on the capital city of Perth and Peel region after a women who returned to WA from Sydney tested positive. WA health authorities believed that the woman caught the highly infectious Delta variant.

Under the new restrictions, which would last three days from midday Sunday, masks would be mandatory for indoor, public transport and outdoor when physical distancing is not possible. There would be a 150-person cap for public events and a 30-person limit for private gatherings. An Australian Football League match in Perth on Sunday also had to be played without spectators due to the new restrictions.

In the Northern Territory (NT), the capital city of Darwin will enter a snap two-day lockdown from 1 p.m. local time on Sunday, after four coronavirus cases were detected.

All four cases were related to a gold mine worker who tested positive on Friday night. The miner's diagnosis also caused hundreds of people being ordered into isolation in WA and some other states. The strain of his infection was not yet known, but health authorities were assuming it was the "worst-case scenario" Delta variant.

Under the lockdown, people in Greater Darwin, Palmerston and Litchfield can only leave home for medical treatment, buying essential goods and service, going for essential work, doing one hour of exercise within a 5 km radius, or providing care to people unable to support themselves.

"While we've never had a case of community transmission in the Territory, we have constantly prepared for this situation," said NT Chief Minister Michael Gunner who described the current outbreak as the territory's "biggest threat since the COVID crisis began."

"We'll do everything we can to test, trace and track this virus, will always do whatever it takes to keep you safe," he said.

Following the latest development, the state of South Australia (SA) is extending its border closure from NSW to Queensland, WA, NT and the Australian Capital Territory.

SA Premier Steven Marshall said there has been "a significant deterioration of the situation in Australia" and the state needed to take decisive action.

According to the figures issued by the Health Department, there were 223 active cases in Australia as for Saturday, and the total case number is 30,457.