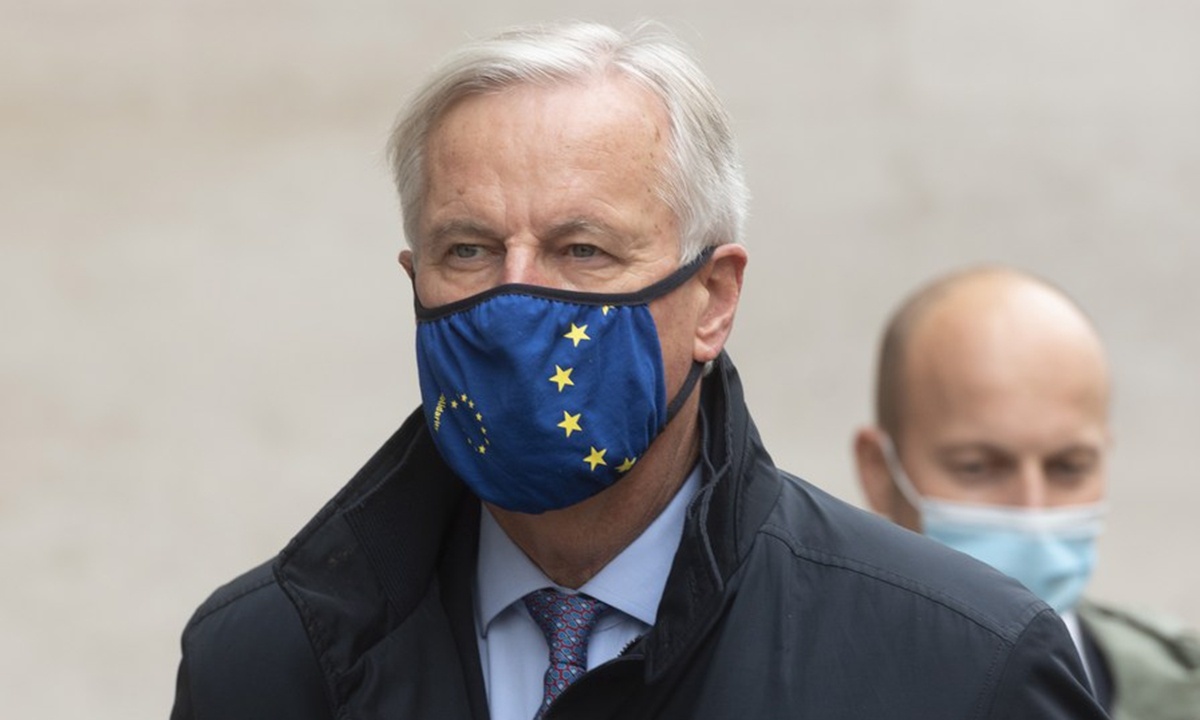 EU chief negotiator Michel Barnier heads for trade talks with Britain in London, Britain, on Oct. 23, 2020. Britain resumed talks on future relationship with the European Union (EU) in London on Thursday. Downing Street said the initial phase of the negotiations will take place here from Oct. 22 until Oct. 25. (Photo: Xinhua)

Negotiators have returned to the table to continue talks over a post-Brexit trade deal between Britain and the European Union (EU), a move seen by many as a positive development.

"They're more intense. You've got more people involved. They've got a clear new structure to them. And I think that the commitment is there now to secure a deal, if possible, in time for it to come into force by the end of the year," Phinnemore told Xinhua in a recent interview.

"I think one thing that we have seen is there's been a little bit more detail provided as to where they are in negotiations. Insofar as I think when (EU chief negotiator Michel) Barnier spoke to the European Parliament, he did really offer a range of areas where broadly the UK and the EU are in agreement. And that we shouldn't lose sight of the fact that there is a fair amount on which they do agree," Phinnemore said.

The expert stressed, however, that huge differences still remain between the two sides.

"Let's not underestimate the fact that there are principles at play here, there are interests at play," he added.

"The big question is, can those be resolved in the coming weeks? I think that the fact that both sides are talking suggests that they think there's some space there to find the deal. And I think also, probably the politics has shifted somewhat because there's more and more calls out there from businesses in particular, to get a deal," he noted.

The two sides have clashed over the issue of "state aid" rules, which limit governmental help for industry in the name of ensuring fair economic competition; and over how much European fishing boats should be able to catch in British waters from next year.

According to Phinnemore, aspects of these "sticking points" could be overlooked in favour of the bigger picture.

"Fishing is always a big political issue in any negotiation, it raises sensitivities. But I think more and more people see the bigger picture -- it's a very small percentage of the economy," he said.

"The UK has fishing waters to which the EU wants access. The EU has a market to which the UK fishing industry needs access. So the logic is, there must be a way to find a deal within that," he told Xinhua.

For Phinnemore, with the deal being similar to the pre-existing one between Japan and the EU, there doesn't seem to be a "radical departure" from what is already in place.

"Obviously, it demonstrates the fact that the UK can conclude negotiations with a third country. But equally, it's probably a reflection of the fact that Japan wants to have as much continuity as possible. It's not as though the UK has secured a deal with a partner with which the EU does not have a trade agreement, and with which the UK would not have had a trade agreement if it had remained an EU member state," Phinnemore said.

Talks on future relationship between Britain and the EU will continue in London until Wednesday, Downing Street has confirmed. The negotiations, which restarted last Thursday in the British capital after they stalled over the sticking points, were originally expected to wrap up on Sunday.

More talks are also planned in Brussels from this Thursday, the BBC quoted EU sources as saying.

Following the recently stalled negotiations, Johnson has previously signified that Britain needed to prepare for a no-deal scenario.

This, to Phinnemore, is still a possible outcome despite the wishes of both sides to get a deal.

"The UK has to prepare for no deal, there's absolutely no guarantee that the deal is necessarily going to be forthcoming in the coming weeks," he warned.

"We could be in a situation where we're very, very close to a deal, but there's simply some blockage there. And as a consequence, you will have a period from the first of January when there is no deal in place. A deal may then come along subsequently so the pragmatic position is you've got to prepare for no deal," he added.

Phinnemore argues that Britain should have been preparing for a much longer period of time for a no deal, especially when some parts of the "British body politic are keen on pursuing a no deal."

According to Phinnemore, the EU and Britain have both recognized the heavy impact of a no deal, but Britain will come off worse in the short term.

"The EU will suffer, but the cost will be on the UK side. And therefore, it will be under pressure to secure a deal. But that does not actually mean to say that a deal will be forthcoming," he said.