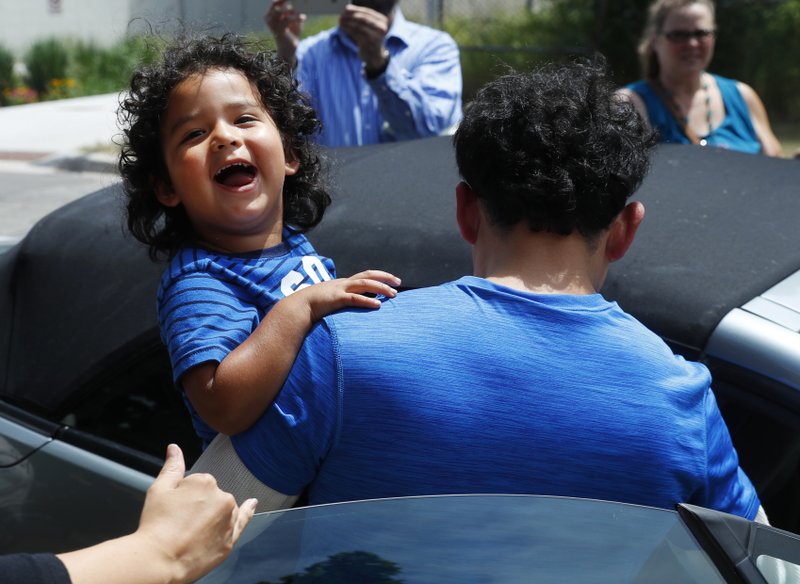 Lugging little backpacks, smiling immigrant children were scooped up into their parents’ arms Tuesday as the Trump administration scrambled to meet a court-ordered deadline to reunite dozens of youngsters forcibly separated from their families at the border.

In Grand Rapids, Michigan, two boys and a girl who had been in temporary foster care were reunited with their Honduran fathers at a US. Immigration and Customs Enforcement center about three months after they were split up.

The three fathers were “just holding them and hugging them and telling them that everything was fine and that they were never going to be separated again,” said immigration lawyer Abril Valdes.

One of the fathers, Ever Reyes Mejia, walked out of the ICE center carrying his beaming son and the boy’s Teenage Mutant Ninja Turtles backpack. The boy was secured in a booster seat, and father and son were driven away. Lawyers said the fathers were too distraught to speak to the news media.

The Justice Department said more than 50 children under age 5 could be back in the arms of their parents by the deadline at the end of the day.

It was the largest single effort to date to undo the effects of President Donald Trump’s zero-tolerance policy of separating families who try to slip across the Mexican border into the US.

Authorities gave few details on where the reunions would be held, and many were expected to take place in private.

In Grand Rapids, the children were “absolutely thrilled to be with their parents again. It’s all confusing to them why there’s so many people here and why there’s so many strangers here, but they know that they’re safe,” Valdes said outside the ICE offices.

Government attorneys, meanwhile, told a federal judge in San Diego that the Trump administration would not meet the deadline for 20 other children under 5 because it needed more time to track down parents who have already been deported or released into the US.

Asked about the missed deadline, the president said: “Well, I have a solution. Tell people not to come to our country illegally. That’s the solution.”

American Civil Liberties Union attorney Lee Gelernt, whose organization filed the lawsuit that forced the administration’s hand, said he was “both thrilled and disappointed” with the government’s work on the deadline.

The administration faces a second, bigger deadline — July 26 — to reunite perhaps 2,000 or so older children who were also separated from their families at the border in the past few months.

On Tuesday morning, staff members at a nonprofit organization that has been housing many of the youngest children “made sure every backpack was full and every child got a hug and a goodbye,” Southwest Key CEO Juan Sanchez said.

Authorities said most of the parents would be released into the US from immigration detention centers, and the children would be freed from government-contracted shelters and foster care. The adults may be required to wear ankle monitors while their cases wind through immigration court, a process that can take years.

Thousands of babies, toddlers and older children were separated from their parents at the border this spring before Trump reversed course on June 20 amid an international outcry over the images of youngsters in chain-link cages and audio recordings of children crying. Many of the parents had turned themselves into US authorities at the border and requested asylum, saying they were fleeing violence back home in their Central American countries.

Late last month, US District Judge Dana Sabraw in San Diego set a 14-day deadline to reunite children under 5 with their parents and a 30-day deadline for older children.

On Tuesday, Sabraw showed little appetite for giving more time to the government unless it could show good reasons in specific cases.

“These are firm deadlines. They’re not aspirational goals,” the judge said.

In trying to meet the first deadline, the government began with a list of 102 children potentially eligible to be reunited and whittled that to 75 through screening that included DNA testing done by swabbing the inside of the cheek.

Of those 75, Justice Department attorneys told the court the government already reunited four children and would guarantee 34 others would be back with their parents by the end of Tuesday. They said an additional 17 could also join their parents if DNA results arrived and a criminal background check on a parent was completed by day’s end.

The government defended its screening, saying it discovered parents with serious criminal histories, five adults whose DNA tests showed they were not parents of the children they claimed to have, and one case of credible child abuse.

“Our process may not be as quick as some would like, but there is no question it is protecting children,” said Chris Meekins, a Health and Human Services Department official helping to direct the process.

In ordering an end to the separation of families, the president said they should instead be detained together. But the government does not have the room: ICE has three family detention centers with space for 3,000 people, and they are already at or near capacity, though the Trump administration is trying to line up space at military bases.

Also, on Monday, a federal judge in Los Angeles emphatically rejected the Trump administration’s efforts to detain immigrant families for an extended period. A longtime court settlement says children who cross the border illegally cannot be detained for more than 20 days.

This story has been corrected to say that In Grand Rapids, Michigan, two boys and a girl who had been in temporary foster care were reunited with their Honduran fathers at a US Immigration and Customs Enforcement center about three months after they were split up.