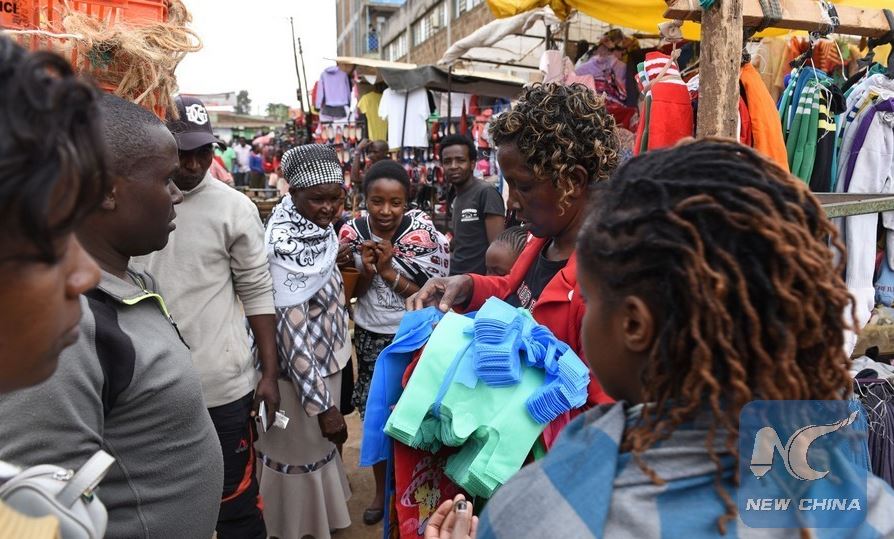 NAIROBI, Aug. 10 (Xinhua) -- The waters of Nairobi River in Kenya's capital flowed aggressively on Thursday, sweeping along all the dirt as they snaked through Mukuru, an informal settlement.

It had rained in the capital and its environs two days earlier, thus, helping the river's water increase intensity.

As the water flowed, among the things that it swept away from upstream were plastic bottles and bags, sticks and recyclable shopping bags of various colors.

The reusable bags are the latest addition to the pollutants of the river, and several others across the East African nation.

The bags were introduced in Kenya last year in August after the East African nation banned plastic bags to curb pollution of the environment.

Kenya banned the plastic bags and imposed what has been termed as the strictest penalty in the world.

Anyone found with plastic bags commits an offence attracting a fine of between $19,417 and $38,834, a jail term of between one and two years, or both.

The bio-degradable bags were, therefore, dubbed the panacea to river, lake and ocean pollution as people would recycle them.

However, the reality is dawning in the East African nation that pollution was due to poor waste disposal habits and not the presence of plastics in the country.

With the new bags once again choking rivers, and the environment, it is evident Kenya should go back to the drawing board.

"Most of those bags in the market are of low quality that you cannot reuse them. This is the reason many are ending up in the environment," shopkeeper Grace Mutuku told Xinhua recently.

Mutuku, who runs the shop on the east of Nairobi, said some of the bags get torn before they are even used.

"The other day a customer bought a head of cabbage and potatoes and put in the bag I sold her and it got torn immediately. This is what is making the bags un-reusable," she said.

The price for the smaller bags is same as that of the banned plastic bags. The low price is seen as one of the causes of the bags ending up in rivers as people can buy new ones each time they go for shopping rather than reuse.

"The challenge with the bags is that for most of them, you can only recycle at most three times before they get torn. This means the waste resulting from the bags is still high," said Simon Njiru, an accountant in Nairobi and a lover of shopping.

Since the ban, the National Environment Management Agency has been conducting impromptu inspection of markets to ensure it eradicates the banned plastic carrier bags.

"We introduced the reusable bags and touted them as the panacea to environmental pollution but that was not the case as our bad waste management practices remained intact. This is the reason the bags are still polluting rivers," he said.

He further noted that a majority of the Kenyan public is apathetic to good public waste disposal due to ignorance.

"Besides the ban on plastics, the environment agency should have educated people in public campaigns on the importance of good waste disposal methods," he said, adding quality of bags in market must be improved to encourage long-term use.