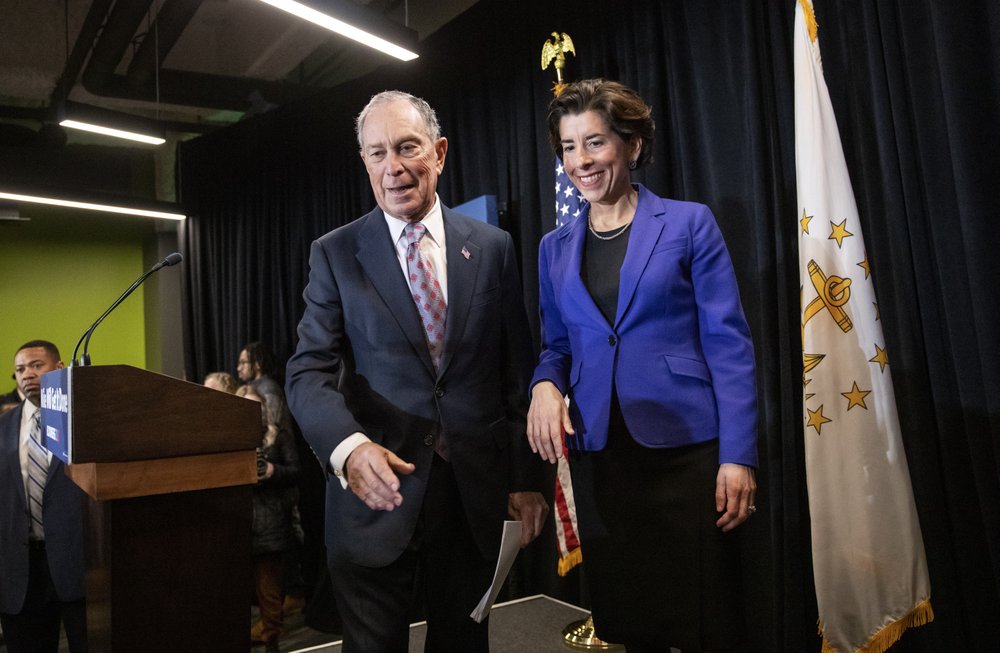 Raimondo, a longtime political ally of Bloomberg, praised him as a doer not a talker, one of the top entrepreneurs in a generation, who confidently led New York City through the aftermath of the Sept. 11, 2001 terror attacks. Bloomberg took over the mayor’s job in January 2002 from Rudy Giuliani, who has since become a Trump ally.

“The stakes are too high in this election. We need to get behind somebody who’s a fighter who has a track record of getting things done. And who can win in November against Donald Trump,” Raimondo said at an appearance with Bloomberg in Providence, which drew a crowd of about 200.

“He’s the only one running who’s actually run something. He’s run a major company, and he’s run the most complex, biggest city in America”

Bloomberg touted his three terms as mayor, and his more recent work, including helping Democrats win the House in 2018 “so that Nancy Pelosi took over, and then she started the impeachment process. We beat him again and I’m ready to do it one more time.”

He called himself “the un-Trump.”

“He makes promises I keep them. He divides people. I try to unite him. He’s a climate denier. I’m an engineer, I actually believe in science. Can you imagine that?” Bloomberg said. “I follow facts, respect data and tell the truth. He looks out for people who inherited their wealth. Unlike him, I’m self made.”

The event was interrupted several times by protesters, including one yelling about the police department’s stop-and-frisk policy when he was mayor. Two protesters were removed by police and two were escorted out by staff.

Raimondo, who will also act as a national campaign co-chair, was among the prominent Democrats to whom Bloomberg’s team reached out before the news broke in November that he was considering a 2020 White House run. At the time, she was head of the Democratic Governors Association and held back from endorsing him, but she praised his record and called him a friend.

The two have known each other since 2010, when Bloomberg was the independent mayor of New York and Raimondo first ran for public office to be general treasurer. Raimondo, a former venture capitalist, called Bloomberg her political idol during that campaign. Later, Bloomberg backed Raimondo’s gubernatorial aspirations when she ran and won in 2014, becoming the state’s first female governor.