Some high-income countries have snapped up about 70 percent of coronavirus vaccines that would be available in 2021, which, together with other issues such as production capacity, would largely threaten equal and timely global vaccine provisions, said a recent report on The Lancet. 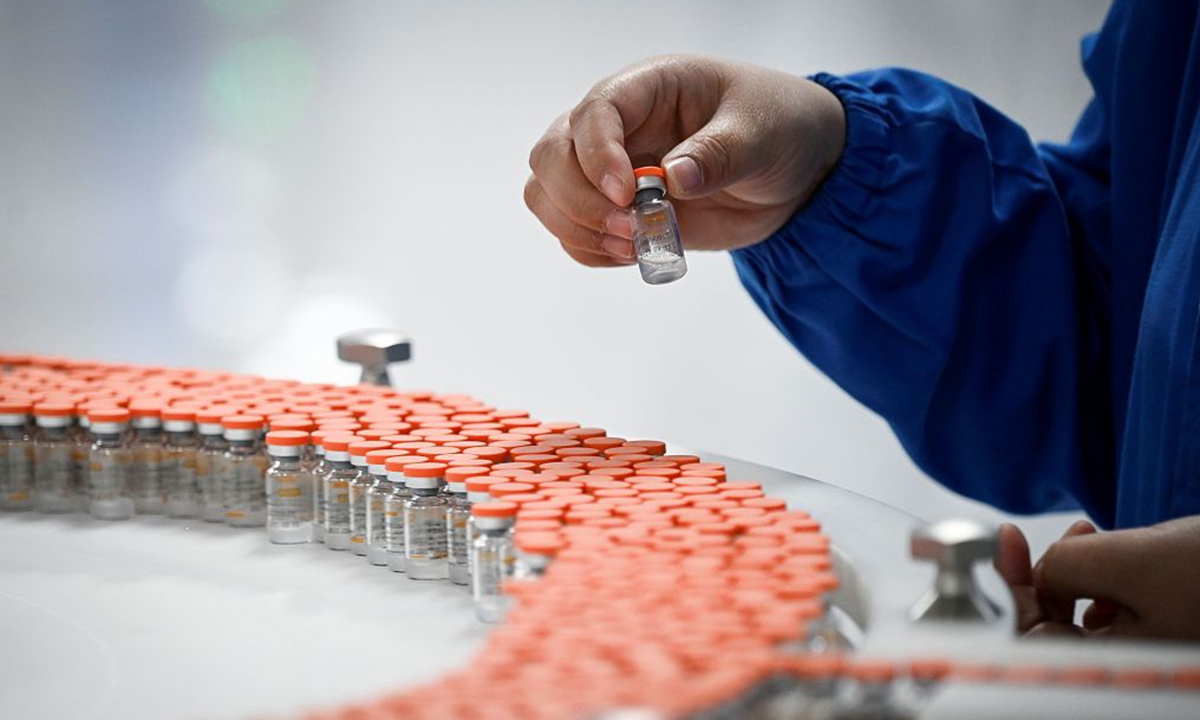 The report, published online on Friday, said that governments in high-income countries, representing 16 percent of the global population, have struck pre-orders covering at least 4.2 billion doses of COVID-19 vaccines, which is at least 70 percent of doses available in 2021 from five candidates.
While COVAX attempts to ensure that no country should vaccinate more than 20 percent of its population until all countries have vaccinated 20 percent of their populations, in accordance with principles of global equality, many high-income countries have bypassed COVAX and instead sought to gain priority access to abundant quantities of COVID-19 vaccines that are enough to vaccinate their populations several times over.
According to vaccine contracts tracked by Duke University, as of February 8, the EU has ordered enough doses to vaccinate its people more than two times, and Canada has about five times more than it needs if each person needs two doses. The US has snapped up 2.6 billion doses, nearly a quarter of the world's supply so far - to cover 396 percent of its population.
Tao Lina, a Shanghai based vaccine expert, previously told the Global Times that it is natural that rich countries bypass COVAX and purchase vaccines in advance directly with the manufacturers.
“But it is not necessary to strike up vaccines. It will take a country weeks even months to administrate millions of doses. If rich countries are willing to share extra doses that they would not use in one month with developing countries, the situation will be much better for the latter,” Tao suggested.
However, a problem is that COVAX is supported by international organizations like the WHO, but these international organizations lack executive power over any country, so it is hard to make rich countries follow COVAX’s guidelines, Tao said.
For COVAX to succeed, The Lancet report said it needs substantial funding to purchase vaccines. As of February 2021, governments and other partners have committed around $4 billion in funding for COVAX, but Gavi and WHO estimate that a further $6.8 billion will be needed for COVAX to procure and deliver at least 2 billion doses by the end of 2021.
Zhuang Shilihe, a Guangzhou-based vaccine expert, told the Global Times that vaccine distribution is more down to countries’ ability to procure them. Vaccines naturally go to rich countries that could afford the bill as poor countries strive for vaccines through COVAX.
COVAX is an ideal scheme that will balance worldwide vaccine distribution, but, multiple factors such as poor countries’ lack of funding to purchase vaccines means the scheme cannot function in a timely manner, Zhuang said.
The fundamental question is the shortage of vaccine supply, the expert said, adding that imbalanced vaccine distribution may not be addressed in 2021.
A successful solution to the production bottleneck would probably require widespread technology transfer to enable the expansion of manufacturing capacity, according to the Friday Lancet report.
Currently, few countries have the domestic capacity to rapidly produce COVID-19 vaccines on their own and instead will need companies to actively share knowledge, technology, and data with domestic manufacturers, the report noted.
Some leading vaccine developers have reached such collaboration with manufacturers in mid- and low-income countries.
Chinese producer Sinovac previously told the Global Times that it now exports semi-finished vaccines to countries capable of filling and packaging doses. It not only eases the pressure on Chinese production facilities, but also saves international transport costs and greatly improves the affordability of vaccines.
Zhang warned that the worst result of the situation is that some countries may conduct mandatory approval to make up vaccine demand like generic drugs in India. “This could happen if some countries have difficulty obtaining vaccines.”
Chinese experts said that China is open to share and transfer technology, but a problem is that maybe not all countries are capable of establishing a production line.
The Global Times learned from Chinese vaccine producers that the production line of inactivated vaccines contains two parts: a virus cultivation workshop and a solid preparation workshop.
Throughout the procedure, there are hundreds of items that should be tested to ensure safety and efficacy of the vaccine.
Every step of vaccine production has to be conducted in workshops that have obtained Good Manufacturing Practice certificates. Countries without such workshops would not be able to ensure the quality of vaccines they produce, Feng Duojia, president of the China Vaccine Industry Association, told the Global Times previously.
The high cost of building coronavirus vaccine production lines would also prevent some countries from producing vaccines on their own, but rather preferring to wait for COVAX allocation or purchase jabs from other countries, experts said.
Transferring technology to manufacture vaccines could be a solution to balance worldwide vaccine distribution, and it may be better to transfer technology to countries with capability to launch large-scale production to make up for vaccine shortages, a Beijing-based immunologist who requested anonymity told the Global Times on Sunday.