ROME, Sept. 25 (Xinhua) -- A right-wing coalition is projected to win the elections held to renew the parliament in Italy on Sunday, showed projections based on partial results. 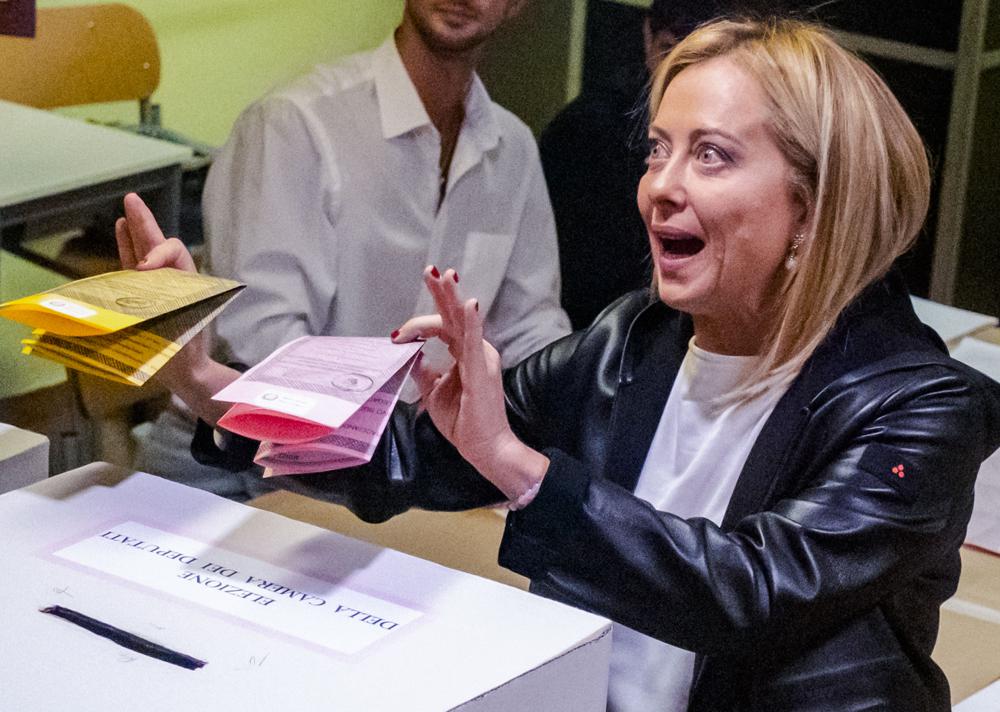 Far-right party Brothers of Italy's leader Giorgia Meloni votes at a polling station in Rome, Sunday, Sept. 25, 2022. Italians are voting in a national election that might yield the nation's first government led by the far right since the end of World War II. (Photo: AP)

The nationalist Brothers of Italy, led by Giorgia Meloni, was the most voted party garnering 24.7 percent of the vote, according to projections provided by Consorzio Opinio Italia pollster and published by state TV Rai News 24.

If confirmed, Meloni would most likely become the first woman to serve as the country's prime minister in the most right-wing government Italy has had in some 70 years.

Center-left Democratic Party (PD) led by former Prime Minister Enrico Letta -- the main force in the center-left alliance -- was projected as the second most-voted party with 19 percent of the vote.

The Brothers of Italy and the PD were the leading forces within the main contenders in the campaign, namely a right-wing coalition and a center-left alliance, respectively.

Populist Five Star Movement (M5S), which has run alone in the campaign, would gain around 16.7 percent, while a smaller centrist force made of two parties -- Azione and Italia Viva -- would secure about 7.3 percent of the vote.

Matteo Salvini's League party and Forza Italia party -- both allies of the Brothers of Italy -- followed with 8.5 percent to 12.5 percent and 6 percent to 8 percent respectively.

In light of partial data available, Rai News 24 reported that the right-wing alliance would control both houses of the next parliament, garnering 227-257 of the 400 seats in the Chamber of Deputies, or the lower house, and 111-131 of the Senate's 200 seats.

Snap elections were called after a national unity government, led for 17 months by Mario Draghi, collapsed in July after the center-right parties and the M5S withdrew their support.

A main commitment of Draghi's cabinet was to put in place key reforms contained in the national resilience and recovery plan as agreed with the EU in order to receive some 200 billion euros (193.9 billion U.S. dollars) by 2026, as part of the EU post-COVID recovery plan.

This would remain a key task for the next government, as the funds were being disbursed in tranches according to a specific reform implementation timetable.

Over 50 million citizens, including some 4.7 million living abroad, were eligible to cast their ballots on Sunday to choose the 400 deputies and 200 senators that will form the two houses of the next parliament.

For the first time ever, as a result of a recent constitutional reform, 18-year-olds in the country will be allowed to vote to elect the Senate and the Chamber of Deputies. This applies to almost 2.7 million young citizens who have just come of age, said the Italian Interior Ministry.

Vote counting began soon after the closure of all polling stations on Sunday, but final results will not come out until early or mid Monday.