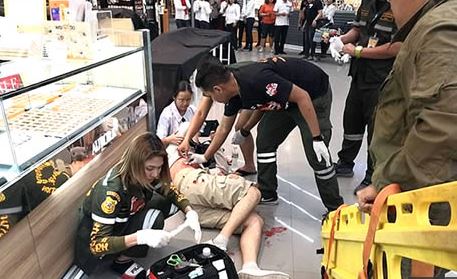 BANGKOK, Jan. 10 (Xinhua) -- Thai police launched a manhunt for a robber on Friday who killed three, including a two-year-old boy, and injured four others at a gold shop in Lop Buri, central Thailand.

The gunman, who wore black from head to toe, arrived alone at the gold shop in a department late Thursday and opened fire at staff members of the shop and shoppers.

One staff member who was shot in the chest died at the scene.

He made off with gold ornaments worth about 500,000 baht (16,534 U.S. dollars) and shot dead a security guard before fleeing the scene on a motorcycle.

Stray bullets hit a two-year-old boy in the head, while he was walking hand in hand with his mother.

The toddler was later pronounced dead in a nearby hospital.

Four other victims were severely injured.

National police chief Pol Gen Chakthip Chaijinda ordered an investigation to find the culprit as he described it as a "vicious and shocking crime."