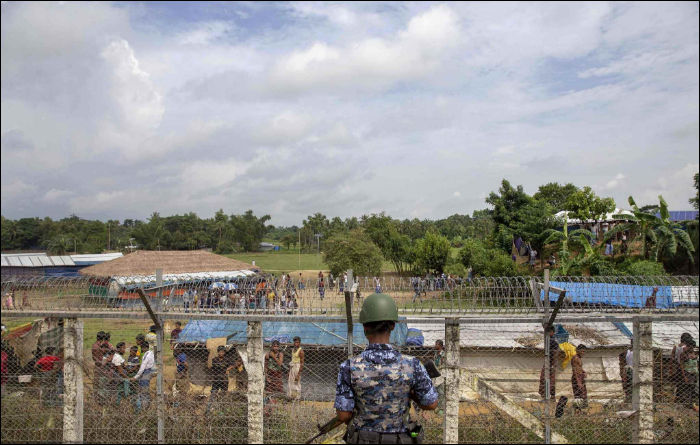 Myanmar border guard police patrol the fence in the "no man's land" zone between Myanmar and Bangladesh border as seen from Maungdaw, Rakhine state during a government-organized visit for journalists, August 24, 2018.(Photo: VCG)

One year ago, hundreds of thousands Rohingya began fleeing killings, rape and the burning of their villages and crossed into neighboring Bangladesh. They are still there in crowded make-shift refugee camps waiting to go back home in Myanmar.

The United Nations Friday marked the occasion by issuing another appeal for their aid, with the UN Refugee Agency (UNHCR) leading the way, calling for support for the stateless Rohingya refugees in Bangladesh and for their generous hosts.

It is estimated that there are 1 million Rohingya refugees in Southeast Asia.

The latest wave of refugees into the Cox's Bazar district in southernmost Bangladesh was due to violent reactions to the deadly August 25, 2017 rebel Rohingya attacks on Myanmar government security posts.

"Kutupalong settlement in Cox's Bazar today shelters more than 600,000 refugees, making it the largest and most densely populated refugee settlement in the world," said the UNHCR.

"Over the past year, UNHCR teams have been working to support Bangladeshi authorities in areas including psycho-social counseling, prevention of sexual and gender-based violence, family counting, identification of and assistance to separated and unaccompanied children and other vulnerable refugees," the agency said.

It also said the joint response plan launched in March 2018, appealing for $951 million for the period from March to December 2018, is only one-third funded.

The World Health Organization said that the biggest challenge is the need to further scale up services to meet the complex, evolving and long-term health needs of this highly vulnerable population amidst a funding shortfall that also threatens to undo the gains and progress made so far.

While so many in Kutupalong were flooded out or are wallowing in mud caused by monsoon rains that hit the region in the beginning of June, the International Organization for Migration said another cyclone season looms at the end of September, and severe funding shortages threaten delivery of vital services.

And, UN agencies were not the only international organizations renewing appeals for the refugees.

The president of the International Committee of the Red Cross, Peter Maurer, described conditions he recently encountered while visiting the refugees.

"When I visited Myanmar and Bangladesh this July, I met people living in misery," he said.

"All communities – Muslim, Buddhist and Hindu – told me how the social fabric and local economy have been destroyed," Maurer said. "Unfortunately, since my visit we have not seen tangible improvements for those displaced or the few who remain in Rakhine."

"We urgently need to scale up the support. The international community must shoulder more of the enormous responsibility that the Bangladeshi authorities and local communities have taken on, as well as show persecuted Rohingya refugees they are not forgotten," Egeland said.