ROK: DPRK eyes nuclear talks with US after military drills 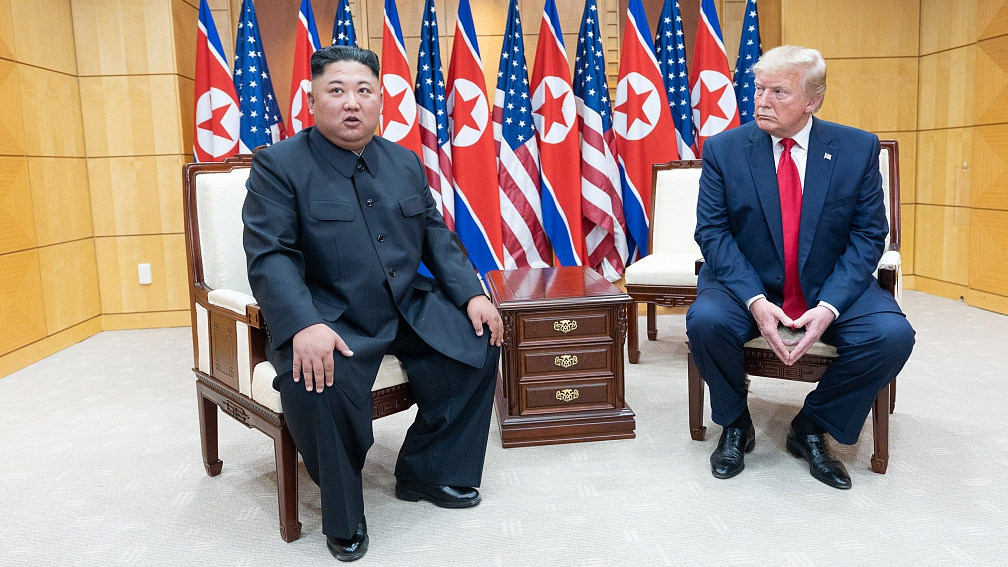 US President Donald Trump (R) and leader of the Democratic People's Republic of Korea Kim Jong Un speak to reporters, as the two leaders meet in Freedom House at the Korean Demilitarized Zone, June 30, 2019. (Photo: VCG)

The Democratic People's Republic of Korea (DPRK) seems to be seeking the resumption of working-level nuclear talks with the US after the ongoing joint military drills with Washington end, the presidential office of the Republic of Korea (ROK) said Monday, Yonhap news agency reported.

The message came after a statement issued by a DPRK Foreign Ministry official Sunday that calls the military drills an "aggressive war exercise against" the DPRK and that it won't even have contact with the ROK unless Seoul gives a "plausible excuse" for the drills.

US President Donald Trump said Saturday he has received a letter from DPRK leader Kim Jong Un, in which he expressed his will to resume nuclear talks with the US "as soon as" the military exercises are over.

"(The DPRK statement) appears to demonstrate the country's willingness to hold working-level talks (with the US over denuclearization) after the drills end," the presidential official said.

In the statement, the DPRK compares the ROK authorities to a "fool," the ROK presidential office to a "shy dog" and the allies' drill to "shit."

The ROK and the U.S. changed the name of the drills in consideration of DPRK's complaint. "Shit, though hard and dry, still stinks even if it is wrapped in a flowered cloth," said Kwon Jong Gun, the DPRK Foreign Ministry's Director-General of the Department of American Affairs.

"It is a miscalculation if they think that the very change of the name of the exercise can alter its aggressive nature or that we would make it pass off quietly," he said.

The Unification Ministry of the ROK said Monday that DPRK's criticism is "not helpful at all" to improve inter-Korean relations.

"The exercise is not a field training aimed at the North, but a joint command post drill intended to prepare for the transfer of wartime operational control (from Washington to Seoul)," Lee Sang-min, the ministry's spokesperson said, adding "it is not a violation of North-South military agreements."

The spokesperson noted that the ROK remains committed to summit agreements reached last September between the two sides, in which they agreed to reduce cross-border tensions.

The DPRK fired two unidentified projectiles off its east coast last Tuesday, the fourth such launch in less than two weeks. Kim Jong Un said the latest missile launches were a warning to Washington and Seoul over their joint war games.