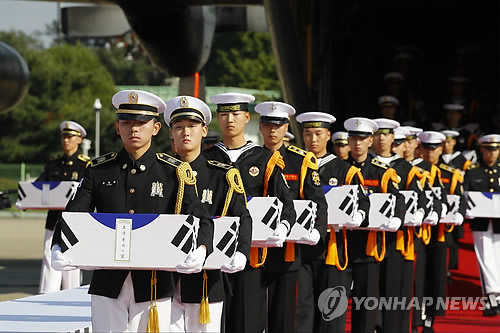 The Republic of Korea (ROK) held a repatriation ceremony on the country's Armed Forces Day for the remains of 64 soldiers who were killed in the Democratic People's Republic of Korea (DPRK) during the Korean War, Yonhap reported on Monday.

ROK President Moon Jae-in chaired the ceremony at Seoul Air Base in Seongnam, 40 kilometers south of Seoul, with the attendance of top military and government officials and religious leaders, including Defense Minister Jeong Kyeong-doo and US Forces Korea Commander Vincent Brooks, said Yonhap.

Escorted by a fleet of F-15K and FA-50 fighter jets, the remains arrived at Seoul Air Base on Sunday afternoon aboard a ROK Air Force transport plane from Hawaii, the news agency added.

The remains were found in the DPRK during a joint 1996-2005 excavation project involving the US and the DPRK.

According to Seoul's Defense Ministry, forensic identification tests in Hawaii confirmed they belong to ROK soldiers.

"It is a relief that my comrades who fought together at the Changjin Lake Battle have now returned home and will be laid to rest in their fatherland," Jeong Il-gwon, a Korean War veteran, said.

After the repatriation ceremony, the defense ministry's Agency of Killed In Action Recovery & Identification will carry out the identification process, including DNA tests, to deliver them to their next of kin, said Yonhap.